Twenty-five years ago a momentous event in recent human history took place. People around the world watched with amazement and delight as a trickle of movement between East and West Berlin led to a mighty torrent, as the wall of oppression and tyranny started to come down.

The Fall of the Berlin Wall was one of the great days in human history in the celebration of liberty and the power of the human spirit. And now we look back and still feel tingles go down our spines as we witness again those amazing scenes of people using whatever they could find to dismantle that hated wall.

A very moving 6-minute video of this can be found here. If the scenes in this powerful clip do not bring you to tears, I do not know what will: www.youtube.com/watch?v=MM2qq5J5A1s 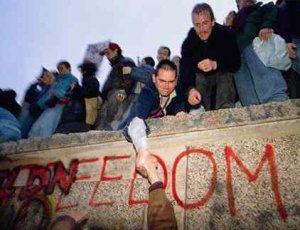 But let me offer a bit of background here. First erected in 1961 to prevent those in the East free passage to the West, it was a very visible and very ugly symbol of Communist totalitarianism. This was certainly seen as a necessary move by the East since between 1945 and 1961 more than 3 million East Germans escaped to West Germany.

On August 13 a perimeter was set up, eventually becoming a permanent set of barriers. On August 24 the first person was shot while trying to cross from East to West. For the next 25 years plenty of attempts at escape were undertaken. It is estimated that some 5,000 people escaped through the Berlin Wall, out of around 10,000 who tried.

There is much that could be said about why the wall fell, and why Soviet tyranny eventually came to an end. That story cannot be told here. But as I have written elsewhere, I believe without a shadow of a doubt that God in his gracious providence raised up three extraordinary leaders back then to help bring about the end of that hideous failed experiment of Soviet Communism.

These three were of course, US President Ronald Reagan (1911-2004), English Prime Minister Margaret Thatcher (1925-2013), and Karol Józef Wojtyla (Pope John Paul II – 1920-2005). These three monumental leaders did as much as anyone to help bring the Soviet system to its knees, and to help bring back freedom to the godless hellholes of the USSR and Eastern Europe.

I often recommend that if you want to get the full picture on these three giants and their contributions to modern history, you pick up John O’Sullivan’s terrific 2006 volume, The President, the Pope, and the Prime Minister (Regnery). Rightly did he subtitle this book, Three Who Changed the World. And they most certainly did.

But let me here highlight just one moment from the life of just one of these three great champions of liberty. I refer to one of the most famous moments of the wall’s history which occurred on June 12, 1987. Back then President Reagan gave a speech at the Brandenburg Gate near the Berlin Wall to commemorate the city’s 750th anniversary.

The 26 minute speech was one of Reagan’s finest, even making it into Time magazine’s Top Ten Greatest Speeches list. Here are parts of that stirring address:

Behind me stands a wall that encircles the free sectors of this city, part of a vast system of barriers that divides the entire continent of Europe. From the Baltic South, those barriers cut across Germany in a gash of barbed wire, concrete, dog runs, and guard towers. Farther south, there may be no visible, no obvious wall. But there remain armed guards and checkpoints all the same — still a restriction on the right to travel, still an instrument to impose upon ordinary men and women the will of a totalitarian state….
In the 1950s – In the 1950s Khrushchev predicted: “We will bury you.”
But in the West today, we see a free world that has achieved a level of prosperity and well-being unprecedented in all human history. In the Communist world, we see failure, technological backwardness, declining standards of health, even want of the most basic kind — too little food. Even today, the Soviet Union still cannot feed itself. After these four decades, then, there stands before the entire world one great and inescapable conclusion: Freedom leads to prosperity. Freedom replaces the ancient hatreds among the nations with comity and peace. Freedom is the victor.
And now — now the Soviets themselves may, in a limited way, be coming to understand the importance of freedom. We hear much from Moscow about a new policy of reform and openness. Some political prisoners have been released. Certain foreign news broadcasts are no longer being jammed. Some economic enterprises have been permitted to operate with greater freedom from state control.
Are these the beginnings of profound changes in the Soviet state? Or are they token gestures intended to raise false hopes in the West, or to strengthen the Soviet system without changing it? We welcome change and openness; for we believe that freedom and security go together, that the advance of human liberty — the advance of human liberty can only strengthen the cause of world peace.
There is one sign the Soviets can make that would be unmistakable, that would advance dramatically the cause of freedom and peace.
General Secretary Gorbachev, if you seek peace, if you seek prosperity for the Soviet Union and Eastern Europe, if you seek liberalization: Come here to this gate.
Mr. Gorbachev, open this gate.
Mr. Gorbachev – Mr. Gorbachev, tear down this wall!

You can view the entire speech here: www.youtube.com/watch?v=5MDFX-dNtsM

This speech of course was given two years before the wall did finally come down. And by then Reagan was actually out of office, having left in January of 1989. And it should be pointed out that it was not because Gorbachev ordered it to be finally torn down, as Reagan had requested, but because of a bureaucratic error. As O’Sullivan explains:

As the rebellions against Communism spread across Eastern Europe in the fall of 1989, the beleaguered East German authorities, anxious to create a safety valve for the popular discontent fueling nightly riots, ordered a more liberal approach to allowing their citizens to visit West Berlin. Misunderstanding their instructions, the guards let people through the gates. A trickle came through, this news was broadcast, the trickle became a flood, and the flood, now intoxicated with liberty, began to chip away at the hated structures. Berlin became a single united city in a few hours, and East Germany ceased in a matter of days to be an effective Communist dictatorship. Over the next few months, the Soviet empire in Eastern Europe gradually collapsed to be replaced by independent market democracies.
The breach of the Berlin Wall was the real climax of the Reagan presidency.

And what a moment it was. The scenes from the media of 25 years ago are still something to move one to tears. We dare not forget the lessons of the Berlin Wall – both of its construction, and of its demolition. Liberty matters, and it never comes cheaply. It might be fitting to close with two more quotes from that man among men, Ronald Reagan:

“Freedom is never more than one generation away from extinction. We didn’t pass it on to our children in the bloodstream. It must be fought for, protected, and handed on for them to do the same, or one day we will spend our sunset years telling our children what it was once like in the United States when men were free.”

“Let us be sure that those who come after will say of us, that in our time we did everything that could be done. We finished the race; we kept them free; we kept the faith.”

6 Replies to “Commemorating the Fall of the Berlin Wall”