In any war there are actually always two enemies: an external enemy and an internal enemy. By internal I mean when our own side does not fight because of fear, indifference, cowardice, laziness, and so on. When one is under attack yet refuses to engage the enemy, or just tries to sit on the fence, that is being an internal enemy.

In the many battles over faith, family and freedom we see this very thing occurring. The many adversaries are obvious: the new atheism, secular humanism, radical feminism, the militant homosexual lobby, expansionist Islam, and so on. They are obvious threats and genuine enemies.

But often the real problem is when our side simply refuses to engage, or is not even aware that we are in a war. Or even worse yet, when we basically side with the opposition, and betray our side. All this and more has been happening for far too long. 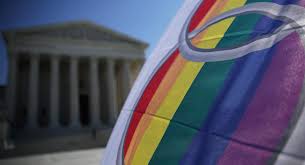 It is with this in mind that I want to make this bold claim: We have been largely to blame for the passage of Roe v. Wade in 1973 and Obergefell v. Hodges in 2015. These two horrific and diabolical SCOTUS decisions on the sanctity of life and the sanctity of marriage and family largely passed because the church of Jesus Christ was asleep at the wheel, was apathetic, was carnal and compromised, and/or was simply missing in action.

To a great degree we have only ourselves to blame for these and other major blows against biblical truth and values. And for that reason, the church collectively, as well as Christians individually, must repent and ask forgiveness from God for our dereliction of duty.

I am not for a moment minimising the forces arrayed against us however. There are very real adversaries, such as the pro-death lobby and the pro-homosexual lobby. They are doing tremendous damage to all that we hold near and dear. But just how much damage have we been doing to ourselves?

The sad truth is we have lost too many of these battles by default. The other side did not so much win as we lost – if we were even engaged to begin with. Part of the problem has been the church and too many believers have simply bought into the false values of the world: “tolerance” and acceptance and niceness and lurve.

David French has just written a piece dealing with aspects of this and is well worth quoting from. He begins:

The most striking aspect of Justice Kennedy’s majority opinion in Obergefell v. Hodges, which created a constitutional right to same-sex marriage, was its deep emotion. This was no mere legal opinion. Indeed, the law and Constitution had little to do with it. (To Justice Kennedy, the most persuasive legal precedents were his own prior opinions protecting gay rights.) This was a statement of belief, written with the passion of a preacher, meant to inspire.

He especially takes Christians to task here, and rightly so:

For many believers, this new era will present a unique challenge. Christians often strive to be seen as the “nicest” or “most loving” people in their communities. Especially among Evangelicals, there is a naïve belief that if only we were winsome enough, kind enough, and compassionate enough, the culture would welcome us with open arms. But now our love — expressed in the fullness of a Gospel that identifies homosexual conduct as sin but then provides eternal hope through justification and sanctification — is hate.
Christians who’ve not suffered for their faith often romanticize persecution. They imagine themselves willing to lose their jobs, their liberty, or even their lives for standing up for the Gospel. Yet when the moment comes, at least here in the United States, they often find that they simply can’t abide being called “hateful.” It creates a desperate, panicked response. “No, you don’t understand. I’m not like those people — the religious right.” Thus, at the end of the day, a church that descends from apostles who withstood beatings finds itself unable to withstand tweetings. Social scorn is worse than the lash.
This is the era of sexual liberty — the marriage of hedonism to meaning — and the establishment of a new civic religion. The black-robed priesthood has spoken. Will the church bow before their new masters?

But let me finish on a somewhat more upbeat note. Russell Moore, president of the Ethics & Religious Liberty Commission of the Southern Baptist Convention, has just written this piece: “Why the church should neither cave nor panic about the decision on gay marriage”. He begins:

First of all, the church should not panic. The Supreme Court can do many things, but the Supreme Court cannot get Jesus back in that tomb. Jesus of Nazareth is still alive. He is still calling the universe toward his kingdom.
Moreover, while this decision will, I believe, ultimately hurt many people and families and civilization itself, the gospel doesn’t need “family values” to flourish. In fact, the church often thrives when it is in sharp contrast to the cultures around it. That was the case in Ephesus and Philippi and Corinth and Rome, which held to marriage views out of step with the Scriptures.

Let’s also recognize that if we’re right about marriage, and I believe we are, many people will be disappointed in getting what they want. Many of our neighbors believe that a redefined concept of marriage will simply expand the institution (and, let’s be honest, many will want it to keep on expanding). This will not do so, because sexual complementarity is not ancillary to marriage. The church must prepare for the refugees from the sexual revolution.
We must prepare for those, like the sexually wayward Woman at the Well of Samaria, who will be thirsting for water of which they don’t even know.
There are two sorts of churches that will not be able to reach the sexual revolution’s refugees. A church that has given up on the truth of the Scriptures, including on marriage and sexuality, and has nothing to say to a fallen world. And a church that screams with outrage at those who disagree will have nothing to say to those who are looking for a new birth.
We must stand with conviction and with kindness, with truth and with grace. We must hold to our views and love those who hate us for them. We must not only speak Christian truths; we must speak with a Christian accent. We must say what Jesus has revealed, and we must say those things the way Jesus does — with mercy and with an invitation to new life.

The SCOTUS decision was devastating on so many levels. And the church must share much of the blame for all this. But SCOTUS cannot stamp out real marriage. As Mike Huckabee put it, “The Supreme Court can no more repeal the laws of nature and nature’s God on marriage than it can the laws of gravity.”

Real marriage always stands, no matter how hard the activists try to redefine it out of existence. So true Christians will keep fighting for biblical truth and real marriage. We must repent of our past carelessness and apathy, and resolve now more than ever to forever stand with God and his word, no matter how greatly and fiercely they are attacked.

12 Replies to “SCOTUS, the Church, Social Responsibility, and Losing by Default”