Well, at least it was supposed to. But it seems another nutjob Christian outfit was caught out with yet another false prediction of the end of the world. Will these folks never learn? Not only do they make a laughing stock out of the Christian faith, but they also cause many believers to stumble.

The latest num num to make these bogus claims is Chris McCann, head of the eBible Fellowship. As one news report puts it: 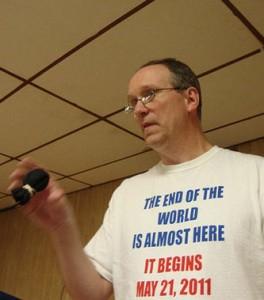 While our planet may have survived September’s “blood moon”, it will be permanently destroyed on Wednesday, 7 October, a Christian organization has warned.
The eBible Fellowship, an online affiliation headquartered near Philadelphia, has based its prediction of an October obliteration on a previous claim that the world would end on 21 May 2011. While that claim proved to be false, the organization is confident it has the correct date this time.
“According to what the Bible is presenting it does appear that 7 October will be the day that God has spoken of: in which, the world will pass away,” said Chris McCann, the leader and founder of the fellowship, an online gathering of Christians headquartered in Philadelphia.
“It’ll be gone forever. Annihilated.” McCann said that, according to his interpretation of the Bible, the world will be obliterated “with fire”.
The blood moon – a lunar eclipse combined with a “super moon” – occurred without event on 27 September. This was despite some predictions that it would herald the beginning of the apocalypse. Certain religious leaders had said the blood moon would trigger a chain of events that could see our planet destroyed in as little as seven years time.
According to this new prediction, however, there will be no stay of execution. On the day of 7 October, the world will end.
“God destroyed the first Earth with water, by a flood, in the days of Noah. And he says he’ll not do that again, not by water. But he does say in 2nd Peter 3 that he’ll destroy it by fire,” McCann said.

Now even in places like Hawaii it is no longer October 7. So unless I have missed something big time, this is just another stupid date plucked out of the hat and hyped up to the max which has then spectacularly crashed to the ground. Sadly such false date-setting is a common occurrence by Christian charlatans.

As mentioned, this is not the first time this guy made a stupid prediction, only to be proven to be a false prophet. He was also part of the Harold Camping baloney of four years ago, as another article reports:

Way back in 2010, I started reporting on the impending judgement day of May 21, 2011 as reported by the late Harold Camping and promoted by the Family Radio network. By way of brief re-cap for those unfamiliar, Camping was the host of a radio show called Open Forum. He believed that he had found evidence in scripture that Judgement Day would take place on May 21, 2011. He and his followers launched a huge campaign that plastered billboards and banners all across the world urging people to repent. They touted this date as a sure thing, and refused to allow for ANY possibility that they could be wrong.
And a LOT of people bought it. The May 2011 rapture/judgement day/end of the world as we know it theory became somewhat of a cultural phenomenon. People all across the globe were selling their possessions and donating large sums of cashola to Family Radio to reportedly help fund the billboard campaign. And again, I stress… in the minds of the Family Radio faithful, there was NO DOUBT that the world would end on that day. END.
One of the affiliates of the Family Radio campaign was eBible Fellowship, headed by a fella named Chris McCann. Chris seemed to be the PR guy for the May 21, 2011 committee, and made several public appearances, including one on Coast to Coast Am during which he refused to accept an invite to be on the program on May 22, 2011… because he was so certain that the world would have ended by then.

I had written several pieces on Camping earlier, such as this one: https://billmuehlenberg.com/2011/05/23/responding-to-false-prophets/

So here we have at least two false predictions made by McCann. Now in my Bible it says that if a guy claims to be a prophet of God, makes a prediction, and it does not come to pass, he is a false prophet and should be stoned to death (Deuteronomy 18:20-22)! While I am not calling for his immediate execution (a good throat punch would do!), this shows how serious we are to take such matters.

And given how explicitly clear Jesus was about all this, there is simply no excuse for such phonies to be given the least bit of credence by any believer. But the fact that zillions of believers seems to follow these nutters, all the way to the bitter end, shows how biblically illiterate and gullible so much of the church is today.

As Jesus plainly said in Matthew 24:35-36: “Heaven and earth will pass away, but my words will never pass away. But about that day or hour no one knows, not even the angels in heaven, nor the Son, but only the Father.” If Jesus himself does not know the exact time, then how in the world do these guys claim to know it?

Oh, and by the way, it seems that McCann’s website is still up there. Not one word of apology. Not one word about maybe getting things just a bit wrong, and promising never to do it again. Instead they have just posted in the past hour a one page justification for their false prophecy!

Undoubtedly another date will soon be set, and more clueless Christians will flock to this goofball. So it is still business as usual it seems for these folks. And how many of their duped followers will continue to stand with them, despite all the false predictions?

No wonder the church is in such a mess.