When the rule of law and the criminal justice system is broken, and broken badly, then no country can last for long. That is exactly what we find occurring in the United States with the recent shock announcement that charges would be laid – not against the baby killing and baby parts selling Goliath but the David who caught them out. This is what has just happened:

The lead investigator behind the undercover Planned Parenthood videos faces up to 20 years in prison after a Houston grand jury decided on Monday not to charge Planned Parenthood with any wrongdoing – and instead indicted him for offering to purchase human organs from the abortion provider.
Center for Medical Progress lead investigator David Daleiden faces a second-degree felony charge of “tampering with a governmental record,” and a misdemeanor charge for violating the state’s “prohibition of the purchase and sale of human organs.” That is, jurors in the state of Texas are accusing David Daleiden of trying to illegally traffic in aborted babies’ body parts.

I of course wrote plenty of articles on this when the explosive videos appeared last year, and highlighted the tremendous work of Daleiden and his team in showing the world the shocking truth about what Planned Parenthood really does for a living. My first article on this is found here: https://billmuehlenberg.com/2015/07/15/planned-parenthoods-deadly-baby-trade/ 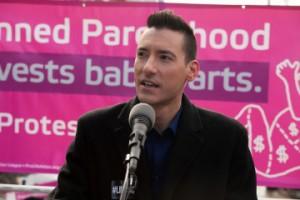 For this amazing undercover work in exposing the diabolical activities of the world’s largest baby killing machine, Daleiden and Co deserve a medal and are worthy of the highest honours. Instead we find a corrupt and poisoned criminal justice system in the US which is actually making Daleiden the bad guy here. This is shocking beyond belief.

But any nation that can legally sanction and justify the murder of nearly one and a half million innocent babies a year has long ago ceased to be morally licit. So I guess we should not be surprised by this latest outrage and travesty of justice.

One commentator, Robert Gagnon, was quick to get off the mark in highlighting the utter madness of this decision:

Instead of indicting the very organization that was trafficking in human body parts the grand jury indicts the persons who were exposing such trafficking, on the alleged grounds that by posing as persons who wanted to sell fetal body parts they were violating the state’s “prohibition of the purchase and sale of human organs.” Say what? So if the feds do an undercover sting operation with the Mafia they can be indicted under RICO racketeering law?

Exactly. It would be as if an international court found that the Nuremberg trials were illegal, letting off the hook the Nazis being tried there. It is that insane and that perverse. Those making massive profits from killing babies and selling their body parts go scot free while those who seek to expose and uncover this dastardly work are the ones being prosecuted!

And surprise, surprise: we now know that a Planned Parenthood board member actually works in the DA’s office which indicted Daleiden. As Jay Sekulow, head of the American Center for Law and Justice states:

What happened in Texas is very troubling. By giving Planned Parenthood a pass and indicting two pro-life journalists who merely revealed this horrific practice through their undercover work, the action of this local grand jury raises serious questions about the appropriate use of our legal system.
When you consider the fact that one of the prosecutors in the Harris County district attorney’s office is deeply involved with Planned Parenthood – serving as a board member for the local Planned Parenthood affiliate in Texas where the undercover investigation took place – along with the fact that she has served as an active fundraiser for Planned Parenthood for years – you have to ask the question – was this probe tainted? Was there a conflict of interest that produced a biased result?

There certainly is a conflict of interest here. Moreover, how many other eyewitnesses will be deterred from testifying about horrific crimes in the future, fearing they too will end up in jail? As Cheryl Sullenger of Operation Rescue said: “This has the effect of chilling the First Amendment freedom of the press and could scare crime witnesses away from coming forward for fear that they might suffer similar retaliatory prosecution.”

And Tennessee Congressman Diane Black put it this way: “It is a sad day in America when those who harvest the body parts of aborted babies escape consequences for their actions, while the courageous truth-tellers who expose their misdeeds are handed down a politically motivated indictment instead. Just days after tens of thousands of pro-life Americans participated in the March for Life to urge legal protection for the unborn, this senseless decision is a grim reminder of the work yet to be done.”

As horrific as all this is, we must look at the bigger picture here. As mentioned, a nation that can kill its own unborn children is already morally dead, and any perversion of justice is possible in such a climate of deadened consciences and ethical blindness.

Matt Walsh highlights these truths in his latest commentary. He begins by offering two very relevant Bible passages here:
-Proverbs 17:15: Acquitting the guilty and condemning the innocent – the LORD detests them both.
-Isaiah 5:20: Woe to those who call evil good and good evil, who put darkness for light and light for darkness.

He highlights the double standards going on here:

If it’s illegal for investigative journalists to assume false identities, why isn’t Chris Hansen in prison? Hansen and his team pretended to be little girls in order to catch older men attempting to molest children. I suppose if the Harris County DA had a crack at them, all of the pedophiles would be cleared of wrongdoing, but Chris Hansen would be charged with fraud, harassment, and solicitation.

A few months ago, raw footage taped during an abortionist convention was leaked online. Many explosive conversations were captured, but perhaps none as devastating as the abortionist who stated very explicitly that abortion is “violence, it’s a person, it’s killing.”
She wasn’t caught in a crime. Even better: she was caught in a truth. In fact, that one statement, uttered by an abortionist who thought she was speaking only to a sympathetic audience, singlehandedly debunked and destroyed the primary pro-abortion argument. Many of the people who defended Planned Parenthood over the fetal trafficking allegations did so by insisting the babies aren’t people anyway. Well, guess what? The abortionists who kill the children disagree with you.
To me, that should be the headline.
But either way, Daleiden did prove for certain that Planned Parenthood sells baby parts, and that should be enough to take the entire organization down. What Daleiden didn’t account for, however, is that our government is corrupt to its core and many of our citizens are self-absorbed cowards. He didn’t account for the fact that justice is dead in America. In fact, it died long ago. It died the moment they legalized the mass murder of babies.

Yes, a nation that kills its own children is a nation that has killed its own conscience. And it has also killed the very notion of things like justice, decency and fairness. That is why we find this shocking case against Daleiden. In the Brave New World of baby killers and state sponsored murder, the only bad guys are those who dare to speak the truth.

As Orwell once put it, “The further a society drifts from the truth, the more it will hate those that speak it.”

Please pray for Daleiden and his team. This is indeed a David vs Goliath battle, and it is ultimately a spiritual battle. At the very least, please sign and share this petition: https://www.lifesitenews.com/petitions/i-stand-with-david-daleiden/924785

12 Replies to “Planned Parenthood, Daleiden, and the Inversion of Justice”