There most certainly is such a thing as sin, such a thing as Satan and such a thing as deception. These three run together, resulting in incredible damage – spiritually and in other ways. Of course in the world people are under the complete control of Satan, sin is a way of life, and deception is everywhere.

That is to be expected. What should not be expected – but sadly happens far too widely – is to see all three things having a field day with those who claim to be Christians. Every day we find folks who claim to be followers of Christ who are clearly deceived and allowing Satan free rein in their lives.

There are just so many examples of this. Simply take one particular area, that of sexual sin. I have heard every sexual sin and perversion being defended by those who claim to be believers, whether it is homosexuality, polygamy or what have you. 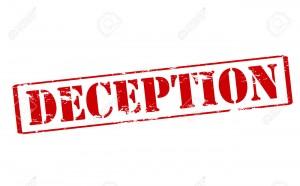 Plenty of “Christians” find no problems whatsoever with premarital sex for example, and the surveys on this are utterly staggering. Not only do they think it is just fine, but they are doing it as well. Imagine that: living in known sin while claiming to be a disciple of Christ.

I was reminded of just how pervasive this is in Christian circles with a recent lengthy debate elsewhere with a gal who also thought there was nothing wrong with premarital sex. She was a classic example of someone fully deceived on this matter. Instead of siding with the clear teachings of Scripture, she threw out every idiotic objection we expect immoral unbelievers to come up with.

But simply reading the Bible would clear up all this deception. There are hundreds of passages on sexual immorality which we are commanded to flee. The passages here are so numerous, that let me restrict myself to just a few verses from just one book:

-1 Corinthians 5:9-11 When I wrote to you before, I told you not to associate with people who indulge in sexual sin. But I wasn’t talking about unbelievers who indulge in sexual sin, or are greedy, or cheat people, or worship idols. You would have to leave this world to avoid people like that. I meant that you are not to associate with anyone who claims to be a believer yet indulges in sexual sin, or is greedy, or worships idols, or is abusive, or is a drunkard, or cheats people. Don’t even eat with such people.
-1 Corinthians 6:9-11 Or do you not know that wrongdoers will not inherit the kingdom of God? Do not be deceived: Neither the sexually immoral nor idolaters nor adulterers nor men who have sex with men nor thieves nor the greedy nor drunkards nor slanderers nor swindlers will inherit the kingdom of God. And that is what some of you were. But you were washed, you were sanctified, you were justified in the name of the Lord Jesus Christ and by the Spirit of our God.
-1 Corinthians 6:13-14 You say, “Food was made for the stomach, and the stomach for food.” (This is true, though someday God will do away with both of them.) But you can’t say that our bodies were made for sexual immorality. They were made for the Lord, and the Lord cares about our bodies. And God will raise us from the dead by his power, just as he raised our Lord from the dead.
-1 Corinthians 6:18-19 Run from sexual sin! No other sin so clearly affects the body as this one does. For sexual immorality is a sin against your own body. Don’t you realize that your body is the temple of the Holy Spirit, who lives in you and was given to you by God? You do not belong to yourself,
-1 Corinthains 7:1-2 Now for the matters you wrote about: “It is good for a man not to have sexual relations with a woman.” But since sexual immorality is occurring, each man should have sexual relations with his own wife, and each woman with her own husband.

Of course using the Greek to get a grasp of all this is preferable. Consider just one rather broad-ranging word. The Greek word porneia has a number of meanings, all centring on illicit sexual activities such as prostitution, premarital sex, bestiality, homosexuality, lesbianism, incest, and so on.

As the standard Greek-English lexigraphical reference work by Bauer, Arndt, Gingrich and Danker (BAGD) states, the word means “prostitution, unchastity, fornication,” and is used “of every kind of unlawful sexual intercourse”. So here we have all forms of illicit sexual activity covered by just one word.

As always, the biblical norm for human sexuality is seen in a lifelong male-female marriage – nowhere else. All this is so utterly clear and obvious in Scripture that it is just bizarre that one has to go over these basic biblical truths. But deception is rampant in so many churches, so we have confused believers like this arguing just like any pagan would. Indeed, this gal threw every ludicrous argument that I normally get from atheists and sexual libertines: love is all that matters; God looks at the heart; we don’t need lists of rules, etc, etc.

It is just staggering to come across this utter nonsense from someone claiming to actually be a disciple of Christ. Let me just mention a few of our many exchanges. I was assured by her that love is all that matters, and if two people are committed to each other, that makes all such premarital sex just peachy.

I replied, by that unbiblical reasoning, homosexuals or threesomes or anyone who “loves” and seems “committed” would be just fine and we should approve of what they are doing. Indeed, homosexuals, and those into polyamory, incest or paedophilia will often claim it is all about a loving and committed relationship.

Or consider this howler of hers: “If Christians only concentrate on obedience to God, we run the risk of not understanding the heart of God fully. I believe that there are grey areas in the Bible where God’s compassion overides the rule.” What? Obedience is just an optional extra, and can lead us away from God?

The Bible everywhere says the exact opposite. Let me provide just four verses, all from Jesus himself on how obedience is essential to any claim of loving God:

-John 14:15 If you love me, keep my commandments.
-John 14:21 Whoever has my commands and obeys them, he is the one who loves me.
-John 14:23-24 Jesus replied, “Anyone who loves me will obey my teaching. My Father will love them, and we will come to them and make our home with them. Anyone who does not love me will not obey my teaching. These words you hear are not my own; they belong to the Father who sent me.”
-John 15:10 If you obey my commands, you will remain in my love, just as I have obeyed my Father’s commands and remain in his love.

And sexual activity such as fornication is merely a “grey area”? Oh puh-leese. Next we will hear that murder and rape are grey areas as well. This is the bitter fruit of a mind riddled with relativism and a blatant disregard for the word of God.

So what are these all about? They are “sets of rules,” the very thing this gal claimed had nothing to do with the Bible or our relationship with God. Sorry, but you don’t get much greater deception than that. One simply cannot have a relationship with God except through obedience, as the passages I just mentioned above make perfectly clear.

But these antinomians who want to justify sin have to simply ignore or deny the majority of the NT to push their twisted agendas. I realise this “relationship only” baloney is all the rage in the emergent church movement, but it is simply damnable heresy, leading people away from God, not to him, as I explain here: billmuehlenberg.com/2008/11/01/jesus-law-and-relationship/

Let me mention one last shocker of hers. Someone posted four simple words on her thread: “fornication is a sin”. She replied this way: “Love covers over a multitude of sins.” Incredible – talk about mangling a verse to justify sin! I deal with the abuse of that passage in detail here: billmuehlenberg.com/2016/02/02/difficult-bible-passages-1-peter-48/

I of course do not mean to be picking on one individual here. The real tragedy is, there would be millions of such people sitting in our churches in the West. They may attend services, and go through the motions, but at the end of the day, they seem to be just like their secular counterparts.

Indeed, when they think like pagans, talk like pagans, and act like pagans, we have every right to ask if they are indeed pagans. When people claiming to be disciples of Christ push the very same ungodly, pro-sin agendas that a non-Christian does, even seeking to defend things like fornication, then you know we have a massive problem here.

When you effectively call God a liar, shake your fist at his face, and reject his Word, you really do forfeit any right to be called one of his own. You are simply just like any other rebel who still needs to lay down his arms, repent, and come to God on his terms, not your own.

We really do need to remind ourselves just how pervasive and dangerous satanic deception is, and how sin accepted and embraced leads to even more blindness, deception, and rejection of God. See this piece for more on this: billmuehlenberg.com/2012/03/13/on-deception/

Smith Wigglesworth had a great line about this which is worth finishing on:

The reason the world is not seeing Jesus is that Christian people are not filled with Jesus. They are satisfied with attending meetings weekly, reading the Bible occasionally, and praying sometimes. It is an awful thing for me to see people who profess to be Christians lifeless, powerless, and in a place where their lives are so parallel to unbelievers’ lives that it is difficult to tell which place they are in, whether in the flesh or in the Spirit.

14 Replies to “This Is Why Christianity Is On the Ropes”