Anyone who has flown on a plane knows about perspective. From many thousands of feet up in the air we can see things far differently than when we are earth-bound. We start to see a much bigger picture, and can see how all the smaller bits fit into a much bigger whole.

I was reminded of this yesterday in yet another flight to a speaking engagement. Looking out the airplane window you see things in a whole new perspective. On the ground you can only see a block or so ahead in a typical city, but from the air you can often see the entire city in one panoramic glance. 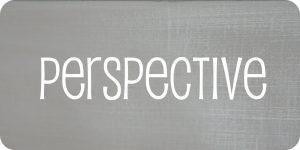 As I was flying interstate yesterday, I thought not only of my own life, but that of others – many of whom are really struggling at the moment. We all go through difficulties, hardships, times of intense conflict and painful battles. While in the midst of such troubles it can so often seem overwhelming, with no relief in sight.

Because we are so caught up in the moment – often a very painful and debilitating moment – it is so easy to lose sight of the bigger picture. We become engulfed in whatever fight or hard place we are in, and perspective can easily go out the window.

We think there is no way out, and depression can easily overtake us. Even thoughts of ending it all can come into play at these tough times. It is exactly at this place where the bigger picture is so vitally needed, but it so often is nowhere to be found.

The immediate difficulty and trial can overwhelm us, leaving us with a very blinkered view of things. Even a secular counsellor will insist on having the sufferer try to see the bigger picture. For the Christian this is an obvious course to pursue.

And it is not just about putting rose-coloured glasses on, or thinking a lot of happy, positive thoughts. It is about focussing on the biggest picture going: God himself. It is seeing God in the midst of our hardships and turmoil. It is realising he is still on the throne.

Getting things into perspective can be the most difficult when we are in the middle of a heavy duty dark patch. When we most need to see God we often find him absent, or even irrelevant. We are so focused on our own troubles that God gets crowded out of our vision.

So we need more than ever during these dark times to make sure God is still in the picture. Getting things into perspective is so important during such periods. Simple realising that compared to so many others, our problems really are not all that great can be of help.

But that is not to minimise our present suffering. All such suffering can seem overbearing. So that is why getting the focus back on God is so crucial. And allowing other believers to speak into our lives during these times is also so important.

It is easy to want to shut ourselves off from others during the dark episodes. But that is when we need others the most. So let me encourage anyone now in a dark place, with seemingly no way out: I am available. Others are available. Get in touch. Don’t try to fight this on your own. We need each other.

And remember that God has not abandoned you during these times as well. He is just as close as he has always been, but your immediate problems are obscuring your vision. No matter how deep the pit we are in, we will not always be there.

Things change and difficulties can vanish as quickly as they came upon us. So we must always keep in view the bigger picture – God’s picture. Plenty of biblical characters could be mentioned here, as well as great saints from church history. Let me mention just one, Elisabeth Elliot.

I have spoken about her amazing life before: billmuehlenberg.com/2015/06/16/notable-christians-elisabeth-elliot/

She lost her first husband to the spears of Ecuadorian Indians and her second husband died of cancer. In an interview some years later she said this about her experiences:

When I stood by my short-wave radio in the jungle of Ecuador in 1956 and heard that my husband was missing, God brought to my mind the words of the prophet Isaiah, “When thou passeth through the waters, I will be with thee” (43:2). You can imagine that my response was not terribly spiritual. I was saying, “But Lord, You’re with me all the time. What I want is Jim. I want my husband.”
We had been married twenty-seven months after waiting five-and-a-half years. Five days later I knew that Jim was dead, and God’s presence with me was not Jim’s presence. That was a terrible fact. God’s presence did not change the terrible fact that I was a widow. I expected to be a widow until I died because I thought it was a miracle I got married the first time. I couldn’t imagine that I would ever get married a second let alone a third. God’s presence did not change the fact of my widowhood. Jim’s absence thrust me, forced me, hurried me to God—my hope and my only refuge. And I learned in that experience who God is—who He is in a way that I could never have known otherwise.
And so I can say to you that suffering is an irreplaceable medium through which I learned an indispensable truth. “I Am.” “I am the Lord.” In other words, God is God. Well, I still want to go back and say, “But, Lord, what about those babies? What about that little spina bifida child? What about those babies born terribly handicapped with terrible suffering because their mothers were on cocaine or heroin or alcohol?” And I can’t answer your questions or even my own except in the words of Scripture.
These words from the apostle Paul who knew the power of the cross of Jesus. And this is what he wrote:
‘For I reckon that the sufferings we now endure bear no comparison with the splendor as yet unrevealed which is in store for us. For the created universe waits with eager expectation for God’s sons to be revealed. It was made the victim of frustration [all those animals—all those babies who have no guilt whatsoever] the victim of frustration not by its own choice but because of him who made it so yet always there was hope [and this is the part that brings me immeasurable comfort] because the universe itself is to be freed from the shackles of mortality and enter upon the liberty and splendor of the children of God.’ (Rom. 8:18–21 paraphrased)
Where does this idea of a loving God come from? It is not man so desperately wanting a god that he manufactures him in his mind. It’s He who was the word before the foundation of the world suffering as a lamb slain and He has a lot up His sleeve that you and I haven’t the slightest idea about now. He’s told us enough so that we know that suffering is not for nothing.

Elliot had perspective – a heavenly perspective. That did not make her suffering instantly disappear or make it easy, but it sustained her through that suffering. Her earthly perspective was dominated by that of eternity. We need the same perspective.

5 Replies to “The Need for Perspective”