Everyone – except the hard-core ideologues of the left – can now see what a joke the so-called Safe Schools program is. Indeed, the whole world can now see that the chief architect of this “anti-bullying” program is a bully himself/herself.

Roz Ward was caught out attacking and bullying a Trump supporter in Melbourne recently, and in this case the photos sure do not lie. Ward is a Marxist thug, and like so many of his/her leftist colleagues who go on and on about tolerance, is not in the least bit interested in tolerance when anyone dares to differ. 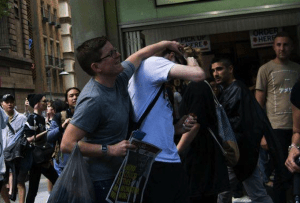 While this photo says it all, let me recap things for those not in the know. Pictures have emerged showing how Ward was trying to rip a hat off a young man at a “No to Trump” rally in Melbourne recently put on by the Monash Student Association.

This clear case of bullying has renewed calls for the sacking of Ward. The Marxist hardliner has already caused controversy by posting a photo of the homosexual flag on Facebook with the comment: “Now we just need to get rid of the racist Australian flag on top of state parliament and get a red one up there and my work is done”.

The comment about the red flag of communism is not some slipup. This Marxist has made it clear that the Safe Schools Coalition (SSC) is in fact all about pushing Marxism in the schools. As he/she proudly stated, “I not only teach people how to be gay, I teach them how to be gay and communist, so invite me to your school if you will.”

Ward also has made it quite clear that the SSC is not about bullying. It is “not about stopping bullying…but about supporting gender and sexual diversity”. See here: www.youtube.com/watch?v=j5uNocBCw3Q&feature=player_embedded

Thus people have rightly been critical of both Ward and the SSC. With this latest example of leftist intolerance and bullying, many are now saying it is time for Ward to go. As one news item reports today:

Premier Daniel Andrews appeared to condemn Ms Ward’s actions when he was asked if it was appropriate for her to grab the man’s hat….
Liberal MP Tim Smith led calls for Ms Ward to resign. “Daniel Andrews mate Roz Ward must resign after being caught harassing a bystander because she didn’t like his hat,” he tweeted. Writer Kate Doak, who says she worked on the Safe Schools steering committee said Ms Ward must go.
“As a now former @SafeSchoolsAust national steering committee member, I think that Roz Ward must go from @latrobe after this,” she tweeted. Managing director of the Australian Christian Lobby Lyle Shelton said it was “beyond comprehension” that public money continued to be spent on Ms Ward’s Safe Schools program.

So even secular leftists are getting real uneasy about this hard-core Marxist. And well they should be. Both Ward and the SSC are completely unacceptable. Yet incredibly we have some rather clueless Christians who still are supporting it, thinking it is just peachy.

That is just mind-boggling, but biblical discernment has long been on the wane among many Christian groups, especially those moving in a more trendy “progressive” direction. As I wrote just a few days ago, the Victorian Salvation Army has decided that they will throw their full support behind this diabolical program: billmuehlenberg.com/2016/11/16/compromised-christianity-treachery-betrayal/

The reaction to that article has been most revealing. It has already been shared many hundreds of times all around the world. Salvos have personally contacted me not just from Australia but from overseas to tell me how utterly shocked they are at this senseless decision.

They are incredulous that an organisation that claims to be based on biblical Christianity would support this immoral pro-homosexual indoctrination program. The overflow of grief and outrage I personally have received from so many Salvos tells me just what a shocking and totally unbiblical decision this was.

It never should have happened, and they never should have been so public and so proud in defending this satanic program. We would expect the atheistic Greens to do something like this, but never a Christian organisation, especially ones founded by the holy and godly Booths.

While countless Salvos worldwide have been shocked and dismayed at this madness, there have been some who have actually defended this terrible decision. I have heard some really bizarre defences over the past few days. For example, one wrote and said that the leadership must have thought and talked about this a fair amount first, so it must be God’s will.

Good grief! Simply making a decision is no guarantee it is a biblical or godly decision. Christian leaders can and do get it wrong – often. Church history is full of this. And this was one of the worst decisions I have encountered in quite some time.

Others made the foolish claim that we had no right to criticise the Salvos publicly and it was slanderous to do so. Um no. One simply has to read the Bible to see that public sin always warrants public rebuke. When a leader in a Christian organisation very publicly and proudly makes a statement contrary to biblical teaching then of course there should be a public response.

And that is just what they got: a very strong and solid public response. How could this not be the case? Indeed, given what a perverted, immoral, anti-child and pro-homosexual program the SSC is, I am surprised they thought they could get away with this without a very concerned response from a very concerned public, especially from countless very concerned Salvos.

Numerous longstanding Salvos have told me just how out of touch the leadership has been to their concerns on this issue, and sadly on other issues as well. So had I said absolutely nothing about this, the response would have been exactly the same. Dozens of other concerned Christians around the world are already reporting on this, just as numerous homosexual websites have been gloating in this announcement from day one.

And of course it is not at all slanderous to publically offer a response when people perceive the gospel of Jesus Christ being radically undermined and threatened by those proudly promoting a pro-homosexual program which is diabolical in nature and is doing untold damage to children.

Jesus was not being slanderous when he publically challenged the Pharisees, or Paul the Judaisers, or the Booths the opponents of their day. It is the holy calling of all Christians under God to discuss these matters, and not sweep them under the carpet and pretend everything is just fine when it is not.

Given how many concerned Salvos have told me how they will now sadly be leaving this organisation and no longer supporting it tells us exactly how very serious this is for so many ordinary godly Salvos who have been utterly heart-broken and devastated over this issue.

It seems tens of thousands of ordinary Salvos are being put in a hard place because of this unwise and unbiblical decision by some of their leaders. So we must continue to pray for these leaders who so wrongly went down this path, that they will see how mistaken they have been, repent, and change course so that the glory of God can again be manifest.

I for one am so very grateful for this mass reaction against this incredibly bad decision. Indeed, had no Salvos made a stink, that would have indicated just how far this group has fallen. But because they are making a very loud stink from all around the world, that gives me real hope that God is still there in the organisation, and there is still hope for it.

So keep praying that some godly wisdom will prevail here, and real repentance will take place. And pray that God keeps exposing the pernicious nature of this program and of its militant activist leader Roz Ward. The Victorian Opposition has already said they will scrap this wretched program if they win office, so pray for that as well.

Our children are far too important, and we should not allow them to be sacrificed on the altar of the radical homosexual and gender bender militants.

27 Replies to “Our Anti-Bullying Bullies – And Some Clueless Christians”