There are various historical events which have been real game changers, and what transpired 500 years ago certainly was one such event that changed the world. Indeed, we are still all impacted by it today. I refer especially to what took place on October 31, 1517 when an Augustinian monk and University of Wittenberg theology professor published his Ninety-five Theses.

What Martin Luther did back then is still being felt around the world. My Catholic friends may well see it as a very bad happening indeed, while Protestants will see it as a vital and necessary step in the forward motion of the church of Jesus Christ.

This event did not occur in a vacuum of course, and there was plenty of reform work already at hand, with papal wealth and excesses being criticised, the sale of indulgences being questioned, protests against ecclesiastical corruption and abuse of authority taking place, antagonism between Rome and Germany already under way, theological and spiritual renewal and reform movements springing up, and so on. 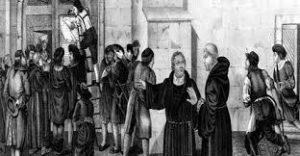 Indeed, as one fair-minded historian of this period, Roland Bainton once put it, “To hold the Reformation responsible for the destruction of the great papal theocracy of the 13th century is to forget the condition into which it had already fallen.”

But the feisty German theologian helped to bring it all to a head, and a break with Roman Catholicism – which was never the original intention of Luther – eventually occurred. The theological differences which were at the heart of this of course here cannot be gone into.

Let me just offer one quote on this. As Reeves and Chester put it, “At its heart the Reformation was a dispute about how we know God and how we can be right with him. At stake was our eternal future, a choice between heaven and hell.” Given the weightiness of such matters, the theological divisions will likely continue indefinitely.

Many thousands of books have of course been penned on the Protestant Reformation – both its European and English manifestations – and on the lives and thought of the main players such as Wycliffe, Luther, Calvin, Hus, Bucer, Beza, Zwingli, Melanchthon, Knox, Farel, Cranmer, etc.

With so much to choose from, only a few select volumes can be mentioned here. And confession time: the great bulk of books mentioned here are simply those which I pulled off the shelves of my own library. However, I have supplemented these with a few others which although unread, I can nonetheless recommend.

And I will simply feature these books in a few key sections, and I will offer them from the oldest to the newest volumes. Notice that there are a number of quite recent books on Luther and the Reformation. More will surely be appearing this year because of the 500th anniversary.

Given that 2009 was the 500th anniversary of the birth of Calvin, one series of books published back then is also worth highlighting here. The 8-volume Calvin 500 Series covers just about everything you might like to know about the reformer and his work:

If the reader were to carefully digest only a fraction of the nearly 40 volumes listed here he or she would have a very good working grasp of what the Reformation was all about, why it was so important, and what the basic theological differences were all about.

I of course write as a Protestant so I think this was a very important development indeed in church history. My Catholic friends may have to just humour me here, look the other way, pray for me, pronounce an anathema on me, or turn the other cheek, as the case may be! Be that as it may, happy reading.

(Australian readers can find many of these volumes at Koorong Books.)