And as McGuire makes clear, this has not been a good thing. The ones who are especially losing here are women. They are the ones who suffer the most when we pretend that men and women are fully identical. She writes:

Nature and biology are pesky realities that are impossible to wipe out, so when we strive for gender neutrality, we are left with a frustrating mess. If anything, the effort to stamp out sex differences has only enhanced sex stereotypes such as aggressive masculinity and hyper-sexualized femininity. And the members of the sex whose characteristics are often more subtle, more mysterious, and more complex are being swept up and pressed into a masculine world. Women are set up to fail.

Going back to the sexual revolution of the 60s, along with the feminist and homosexual movements, the move has been to deny any innate differences between men and women. While women were promised liberation and freedom, they instead were the big losers, while men were the big winners:

The gender identity movement parades under the mantle of equality, but it only makes the world a less equal place. By denying the sexual binary inherent to human bodies, the gender revolutionaries just tip the scales toward men, making it easier for them to buy women for sex and easier for them to violate women’s safe spaces. And they make it impossible for women even to complain about the abuse on the basis of sex – a category they are intent on eliminating. 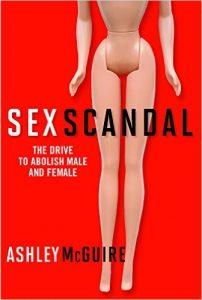 A book on the new androgyny and the war on gender could go down historical, philosophical or sociological paths. This book briefly engages all three, but the bulk of it looks at examples of the war on sex differences and the negative consequences thereof.

Many of the stories are familiar, and in detailed chapters she examines how this is impacting areas such as sport, the military, parenting, education, popular culture and even our bathrooms. Of course science is put at risk, as gender ideologues seek to trump scientific and biological reality.

The idea that there is no biological basis for gender but it is just a social construct is of course not something science supports. It is simply a radical ideological position being pushed for political and social reasons. McGuire cites some of the research on the very real differences between men and women.

Things like hormones, DNA, chromosomes and other key biological markers have to be dealt with, not ignored. But that is what the activists are doing, and it sure does not look pretty. She quotes UK political philosopher Rebecca Reilly-Cooper who wrote an important essay on this in 2016, “Gender is Not a Spectrum”:

Once we assert that the problem with gender is that we currently recognise only two of them, the obvious question to ask is: how many genders would we have to recognise in order not to be oppressive? Just how many possible gender identities are there? The only consistent answer to this is: 7 billion, give or take. There are as many possible gender identities as there are humans on the planet.

It does seem like all this has come out of nowhere: “It seems like you woke up one day and suddenly it was normal for kindergartens to ban Legos as sexist, for high school boys to shower in the girls’ locker room, and for America to send the mothers of toddlers to defend us from our enemies.”

But there is a background to all this, so she takes us on a very brief tour of how this came about. She looks at some of the usual suspects. French feminist and existentialist Simone de Beauvoir for example said in her influential 1949 book The Second Sex, “One is not born, but rather becomes, a woman.”

Many look to the publications by gender theorist Judith Butler from the 1980s onwards as being a key turning point here. Her theories and those of others rapidly caught on, primarily in our universities. Coupled with the feminist movement of the 60s and 70s, all this culminated in the genderless world we now find ourselves in, including the full-scale transgender revolution.

Children of course suffer from all this. The universal and historical assumption that every child has a right to a mother and a father has been thrown out the window by the activists. With homosexual and trans families, children are being denied the most important thing they can have.

The truth is, men and women are different, and they parent differently as well, as the research on this is becoming increasingly clear. “As Yale psychiatrist and author Dr. Kyle Pruett sums up the research, it’s clear that ‘fathers don’t mother and mothers don’t father.’ In parenting, as in much else, men and women have different strengths.”

But as mentioned, a major loser in this sex revolution has been women. They have lost big time. Feminism and the Sexual Revolution have disdained things like chivalry, viewing them as outdated, oppressive and patriarchal. But, says, McGuire, “without chivalry the worst masculine qualities run rampant.”

Chivalry is built on respect for women. She states: “It is sexual difference that activates chivalry, and women are its primary beneficiaries. Chivalry is not exploitative; it is the force designed to prevent men from exploiting women, particularly when they are most in need of different treatment.”

In all this, women lose, men gain, and society is the worse for wear. All because we have bought the myth of the androgyny activists. “A gender-neutral society effectively stacks the deck in favour of men by binding itself, in the name of political correctness and equality, to everything that makes women more vulnerable. Women are forced to compete on male terms, and the male model of accomplishment is the default, the paradigm against which women are judged.”

The key is to return to sanity by acknowledging that real equality can only occur when we recognise and act on the obvious: men and women are different. As she says in the conclusion of her book: “The starting point for authentic equality between the sexes must be recognition of what makes us different and the acceptance that some of those differences cannot be altered. . . . Only when we can all say vive la différence can men and women truly begin to live as equals.”

7 Replies to “A Review of Sex Scandal. By Ashley McGuire.”