The word “equality” is thrown around all the time in our politically correct culture. “Fairness” is another such term which we hear constantly. But sadly there is a lot of fuzzy thinking as to what these terms actually mean. That is certainly the case with the homosexual and transsexual activists.

What these folks mean when they toss out these words is radically different than what they actually mean, and have always meant. Consider a few basic truths about equality. It has long been held that there is nothing more unequal than the equal treatment of unequal people.

As Aristotle put it, “The worst form of inequality is to try to make unequal things equal.” When we pretend that things that are manifestly different are the same, and try to treat them that way, then we get into all sorts of strife. One simply cannot claim that apples are oranges, and vice versa.

It is the same in the homosexual marriage debate. The activists keep speaking about “marriage equality”. But the male-female union with its ability to rear and raise the next generation is fundamentally different from male-male unions or female-female unions.

The truth is, the “equality before law” that the homosexual activists are demanding is a chimera. Marriage means something in particular, and those who want it must abide by the rules. And the rules are simple: one man and one woman; of a proper age; no close blood relations.

Abide by these rules and anyone can marry. Thus homosexuals are no more (and no less) being discriminated against than are all kinds of other people. Yes, a homosexual cannot now legally marry in Australia, but neither can many others:
-A five-year old boy cannot marry.
-Three people cannot get married to each other.
-A father cannot marry his daughter, regardless of his affection for her.
-I cannot marry (I already am).

So their cries of discrimination and rights being denied are bogus. But let me look at a related area where equality is being blown out the window. The trans activists talk a lot about equality but their relentless social engineering ends up with all sorts of nasty inequalities.

Simply consider the world of sports for example. We have plenty of cases of gross inequality and unfairness going on here, all in the name of transgender “equality”. And overwhelmingly it is women who are the real losers. Consider a case that just hit today’s press:

Kiwi weightlifter Laurel Hubbard has dominated her first major competition, taking out the Australian International in Melbourne on a night she made history as the first transgender athlete to represent New Zealand. Hubbard, 39, won the women’s over 90kg division at the Melbourne event, setting four unofficial national records in the process. Hubbard lifted a combined total of 268kg – 19kg better than silver medallist Iuniarra Sipaia of Samoa. Australia’s Kaitlyn Fassina claimed the bronze medal with 223kg. Hubbard looked visibly emotional as she lined up behind dais awaiting the official medal presentation. But she kept the tears at bay, smiling and waving as she stood atop the podium….
Hubbard, who once competed at national level as Gavin Hubbard, transitioned in her mid-30s. 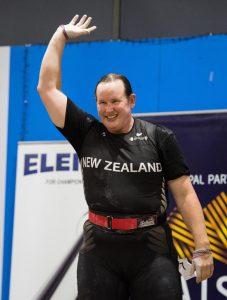 Um, Laurel is a guy. That is why he keeps winning. It is easy for stronger, more powerful men to whoop physically weaker women. Calling yourself female when you are male changes nothing. One look at the guy’s pic dispels any illusions about this guy being a female.

So while he is demanding his “right” to be treated “equally” when he pretends to be another sex, there is no fairness or equality for all of his genuine female opponents. They are the ones who suffer. Indeed, they sometimes can even be sent to the hospital when they face these men who are deluded into thinking they are women. Consider the famous case of Fallon Fox.

The June 8, 2015 headline says it all: “Transgender ‘Female’ MMA Fighter Brutally Injures Female Opponent.” Here is part of that story:

Transgender mixed martial arts (MMA) fighter Fallon Fox is the target of criticism after brutally injuring an opponent Fox defeated Tamikka Brents just two minutes into the first round of the match. Brents suffered a damaged orbital bone, which required seven staples, and a concussion. Brents summed it up: “I’ve never felt so overpowered ever in my life.”
“I’ve fought a lot of women,” Brents stated. “And never felt the strength I felt in a fight as I did that night. I can’t answer whether it’s because [he] was born a man or not, because I’m not a doctor,” she stated. “I can only say, I’ve never felt so overpowered ever in my life, and I am an abnormally strong female in my own right.”
The video of the Brents-Fox fight was pretty brutal: Fox threw knees to Brents face and torso right at the beginning, to kick off the fight. Brents ultimately turned her back to avoid more damage – and took almost a minute of hard strikes from Fox’s elbows and fists, before the referee stopped.
Because of how men and women are differently built – Fox, who was born a man, has larger hands, shoulders, bones, and muscle mass – a transgender opponent has a huge advantage. Because Fox transitioned her gender so recently, she still has many of the advantages that being a man has.
And, on Saturday night when Fox fought Brents, those advantages were very clearly on full display. Already, criticism is mounting, both from MMA fighters and the greater public at large. Mixed martial arts champ, Ronda Rousey, has refused to fight Fox over her “unfair advantage.”

There are plenty other examples from the world of sports that we can run with here. Let me offer just one more, but this one involving a girl claiming to be a guy. “Transgender boy wins Texas girls wrestling championship” is how the February 26, 2017 headline reads. The story begins:

Mack Beggs, a 17-year-old wrestler who identifies as male, has won a Texas state title in girls wrestling, overcoming jeers from the crowd en route to a controversial championship. The victory was contentious in part because Beggs is taking testosterone as he transitions from female to male, which some claimed gave him an unfair advantage.
“She’s standing there holding her head high like she’s the winner. She’s not winning. She’s cheating,” said Patti Overstreet, the mother of another wrestler, according to the Washington Post. “It’s not equal. It’s never going to be equal.”

Did you get that? This mother knows far more about reality and basic biology than all of our eggheads, activists and coercive social utopians. Let me repeat her wise words: “She’s not winning. She’s cheating. It’s not equal. It’s never going to be equal.”

Nope, it sure ain’t equality, and it sure never will be. Trying to treat unequal things equally will always result in blatant, appalling inequality. And in the case of sports, it will result in more women being taken to hospital – if not the morgue.

It is time to say no to unequal equality.

8 Replies to “Equality, Inequality and the Transgender Revolution”