Note: I do not favour any acts of terror, or any violence against innocent civilians.

With yet more European terrorism – this time in Brussels, Paris and London – we have to once again restate basic truths. Never mind that I have made these points many dozens of times now – they need to keep being made, as long as the mainstream media refuses to impartially and accurately cover the news.

The reason why this is all the more urgent now is that one of the three latest terror attacks was not done by a devout Muslim, but by someone worried about Islam. He was a “right-wing” terrorist, or so we are told. If you have not heard anything about the Brussels and Paris attacks there is good reason for this.

The leftist MSM is utterly focused on London, more specifically Finsbury Park, where a non-Muslim drove a van into a crowd of people outside of a mosque. Everywhere the media has been in overdrive about this. As I said, is an attack on innocent people ever to be condoned? Of course not. 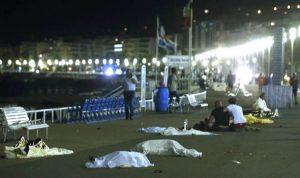 But it is the despicable hypocrisy and double standards here that stink to high heaven. The T and H words were immediately released (terrorism and hate); global condemnation was instantaneous; and incredibly, not one excuse was made by the MSM for this particular attack.

For some reason the Muslim Mayor of London Sadiq Khan did not repeat his claim that terrorism is part and parcel of living in a big city. Indeed, while he is often silent on all the terror attacks in his city and nation, he was very quick to stand in front of the media to condemn the attack and offer more police protection for mosques.

We do not know all that much about the attacker, Darren Osborne, but within minutes of the incident the media, the politicians and the elites were utterly sure about his motivation: he was an evil Islamophobe. Yet when a Muslim with the name Muhammed waves an IS flag, shouts “Alahu Akbar,” and lops off the heads of infidels, all the experts assure us that we have no clear motive to go on.

You know the drill by now: every idiotic excuse in the book is made for Muslim terrorists. It has become such a standard and routine response of Western leaders, commentators and “experts” that we do not need to wait for any new information.

The formula runs like this: A Muslim kills in the name of his faith, or political ideology, making it 100 per cent clear what his motivation is, what his religion is, and what his beef is, and the West offers us this:

-he was mentally ill
-he was a lone wolf
-he must have had some real serious grievances to act like this
-we cannot tar all of Islam with this one attack
-we must remind people that Christians are terrorists too
-we must insist that you have more chances of getting killed by a wayward emu than a Muslim terrorist
-we must repeat the mantra that Islam is a religion of peace
-we must come to accept all this as the new normal
-we must accept that this is the way life now is in the West
-we must insist that the real worry is any backlash against Muslims
-we must do more to protect Muslims
-we must resist all this racism
-we must assure all Muslims that we fully stand with them no matter what
-we must stop alienating and offending Muslims
-we must above all guard against Islamophobia
-we must remember the appropriate response: more hashtags, candle-lit vigils, “peace” marches and love-ins
-we will need more pop concerts with young pop stars gyrating in front of smitten 13-year-old girls
-we will hire yet more Muslim policemen, firemen, politicians, military leaders, lecturers, and news readers in the West to combat all this ugly Islamophobia
-we will immediately attack and condemn anyone who dares to say we might have a problem with the political ideology of Islam

Now just change a few words and see how all this goes down with the Finsbury Park attacker:

-he was mentally ill
-he was a lone wolf
-he must have had some real serious grievances to act like this
-we cannot tar all of conservativism with this one attack
-we must remind people that Muslims are terrorists too
-we must insist that you have more chances of getting killed by a wayward emu than a right wing terrorist….

Exact same response, but to a different attacker. Now unless I have missed something here, I have never once heard any of these excuses and justifications for the non-Muslim attacker. Not one. Never. Why is that? Why do we have a broken record when it comes to clear-cut cases of Islamic terrorism and jihad, but the whole world goes nuts when one non-Muslim does something similar?

And yet the fools running the West (and that is exactly what they are) are insisting that there is some sort of moral equivalence here: Islam has a few bad eggs, but so too does the evil right wing. Um no. Conservatives during the past 16 years have not gone on 31,046 deadly terror attacks.

Simply consider what has been happening this month, since it is now Ramadan. This is always a prime time for terror and jihad as I explain here: billmuehlenberg.com/2014/07/02/ramadan-and-jihad/

So what does the Ramadan bombathon scorecard look like at the moment? Let me tell you: It is only day 25 of this special annual time for Muslims, and already we have had 145 Islamic terror attacks resulting in 1350 people being killed.

Um, aside from Finsbury Park, please offer me ten other examples of right wing terrorism resulting in numerous casualties this month. Indeed, just name two others. There is no moral equivalence here whatsoever. Yet most of our Western leadership and commentariat are hell-bent on assuring us that the two are equivalent – and actually the right wingers are probably worse!

The simple truth is, most Western leaders and commentators are fully in bed with Islam and will never say anything negative about it – despite the daily, even hourly, body count which keeps on rising and rising. They will only get really hyped up about terrorism when it comes from a non-Muslim it seems.

As columnist Rita Panahi so very rightly put it today, “Finally, the terror deniers of the Left have a terrorist they are happy to condemn.” Yep, finally a REAL act of terror! Finally someone that we have no doubt about the motivation! Finally a clear-cut case of genuine evil!

As I say, I am fed up with these reprehensible double standards. Thankfully some others, like Panahi, are as well. Let me quote a bit more from her column:

Finally, the terror deniers of the Left have a terrorist they are happy to condemn. In the aftermath of the attack there have been no idiotic efforts to downplay the terror threat by comparing the number of deaths in the West with those who die from bee stings or fall off ladders.
The very people who implored us to carry on as before and not be alarmed after an Islamist blew up little girls leaving a pop concert in Manchester seem to think it is perfectly reasonable to be hysterical about a lone attack aimed at Muslims.
Curiously, too, the usual calls for love, tolerance and togetherness have been replaced by opportunistic fearmongering from the very people who steadfastly refuse to accept the reality of Islamist terror around the world. Instead of prayers, hashtags and demands for unity, the Left has gone on the attack by blaming its ideological opponents for inspiring the attack.
Terror is terror and should be condemned categorically, not just when it is convenient to your ideological narrative. Harry Potter author JK Rowling tweeted “Let’s talk about how the #FinsburyPark terrorist was radicalised”, with an image of former UKIP leader Nigel Farage in front of a “breaking point” anti-illegal immigration poster.
Sadly, this type of hypocrisy dominates the current debate.

Yep, it sure does. And most folks are getting sick and tired of it. If we took the threat of Islamic terror seriously, we might spare the lives of many innocent men, women and children. But as long as our elites play this sick game of defending Islam at all costs, the toll will rise, there will be more bloodshed on our streets, and likely – and regrettably – there will be more revenge attacks carried out by those who have lost all faith in their governments to protect them.

For those interested, a five minute video by Paul Joseph Watson on this matter is well worth watching: www.youtube.com/watch?v=Rb99RVT6afI

17 Replies to “Terrorism: When Truth Disappears”