Retired Presbyterian pastor, best-selling author, and the creator of the Bible paraphrase The Message Eugene Peterson has caused a big stir by saying he is happy with homosexuality and homosexual marriage. And he has caused another stir by soon thereafter “retracting” what he said.

It is confusing to say the least, and one has to ask a few hard questions. When book deals, book income, speaking gigs and so on come under threat, one can suspect that a “retraction” may have been done for less than ideal motives. This seems to be the case when one reads what he said in his original interview. 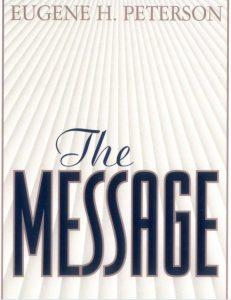 It can be found in its entirety, including the two main questions about this, in the first link below. The first question was this: “You are Presbyterian, and your denomination has really been grappling with some of the hot-button issues. I think particularly of homosexuality and same-sex marriage. Has your view on that changed over the years?”

He talked about there not being too much homosexual activity in his churches when he was pastoring, and then went on to say this, which was the real point of controversy:

In my own congregation — when I left, we had about 500 people — I don’t think we ever really made a big deal out of it. When I left, the minister of music left. She’d been there ever since I had been there. There we were, looking for a new minister of music. One of the young people that had grown up under my pastorship, he was a high school teacher and a musician. When he found out about the opening, he showed up in church one day and stood up and said, “I’d like to apply for the job of music director here, and I’m gay.” We didn’t have any gay people in the whole congregation. Well, some of them weren’t openly gay. But I was so pleased with the congregation. Nobody made any questions about it. And he was a really good musician.
I wouldn’t have said this 20 years ago, but now I know a lot of people who are gay and lesbian and they seem to have as good a spiritual life as I do. I think that kind of debate about lesbians and gays might be over. People who disapprove of it, they’ll probably just go to another church. So we’re in a transition and I think it’s a transition for the best, for the good. I don’t think it’s something that you can parade, but it’s not a right or wrong thing as far as I’m concerned.

The second question was this: “A follow-up: If you were pastoring today and a gay couple in your church who were Christians of good faith asked you to perform their same-sex wedding ceremony, is that something you would do?” And his reply: “Yes.”

I’ve never performed a same-sex wedding. I’ve never been asked and, frankly, I hope I never am asked. This reporter, however, asked a hypothetical question: if I were pastoring today and if a gay couple were Christians of good faith and if they asked me to perform their wedding ceremony—if, if, if. Pastors don’t have the luxury of indulging in hypotheticals. And to be honest, no is not a word I typically use.
When put on the spot by this particular interviewer, I said yes in the moment. But on further reflection and prayer, I would like to retract that. That’s not something I would do out of respect to the congregation, the larger church body, and the historic biblical Christian view and teaching on marriage. That said, I would still love such a couple as their pastor. They’d be welcome at my table, along with everybody else.

So which is it? What is the real message here Mr Peterson? Sorry, but I and others find the so-called retraction a bit suspect. The idea that he was caught off guard in the original interview and just blurted out a reply he had never really thought about before just does not cut it.

He would have been reflecting on these matters for years of course, so the answers he gave in his interview would have been a faithful reflection of where he was at on these matters. Indeed, in the second article I link to below the guy who interviewed him said Peterson had said three years ago that he “started to change my mind” on the homosexuality issue.

So his retraction rings a bit hollow here to be honest. A big backlash has obviously shook him up, and now he seems to want to put out some of the flames caused by his initial remarks. Well, I hope he does want to affirm biblical truth on this issue. But even in this retraction he has said things which are still very worrying indeed.

Recall that he said this: “I would still love such a couple as their pastor. They’d be welcome at my table, along with everybody else.” Um, really? Allowing an unrepentant homosexual couple at the Lord’s Table? That can only mean one thing in my books: a pastoral blessing on this sinful union if not this sinful lifestyle.

So confusion still seems to reign here. And I am not alone in thinking this. One biblical scholar and expert on homosexuality, Robert Gagnon, posted on his Facebook page his own concerns about this supposed retraction. He began with these words:

Really? Not so fast: How does one in a single day go from dismissing something as foundational as a male-female prerequisite for sexual unions to (allegedly) embracing such a prerequisite, with the only thing occurring in between being a major threat to a massive loss of influence in the evangelical community along with income from book sales? Read carefully both Peterson’s RNS interview by Merritt and his subsequent “retraction” and decide for yourself which is the “real” view of EP. I have been actively engaged in the discussion of homosexuality in mainline churches (and now evangelical churches) for over two decades. If there is one thing that I have learned about assessing a person’s actual view, it is that you have to read and listen very carefully to what is (and what is not) written and spoken. On this issue the “dodge” is common.

The focus of Peterson’s regret is on generating controversy (“It has never been my intention to participate in the kind of lightless heat”) rather than on violating a foundational Christian standard for sexual ethics.
What kind of credibility would there be to such a “retraction” (again: Precisely what has he retracted?) if, instead of commenting on homosexual relations, he had commented on there being “no right or wrong” about adult-consensual incestuous unions or adult-polyamorous unions, had expressed the desire that there be no further controversies over such relationships in the church, spoke of welcoming them to church and to his table without any mention of the need for repentance, expressed his willingness to perform a marriage ceremony for such and then subsequently retracted (after a huge controversy endangering income) only the willingness to perform a ceremony and the use of the name “marriage”? Would such a “retraction” really give one assurance of his complete rejection of such unions?

At the end of the day, we may never fully know where Peterson stands. He seems to be all over the place. But as always we must pray for folks like Peterson. He certainly needs our prayers during this time, and we can pray that he gets back to the biblical message on this, not the world’s message.

Sadly, none of this is all that surprising. Christian leaders are dropping like flies in the West when it comes to all things homosexual. One after another is compromising and capitulating on these sorts of issues. Thus when I first heard the story I was not inclined to write about it.

I just thought that such sell-outs to the gospel on this issue are a dime-a-dozen. But with his quick back-tracking, the story gets even more bizarre. Of interest, in the second article he says he will now no longer make any public comments. That might be a good thing indeed.

If Christian leaders are going to speak publicly, they had better ensure what they say fully lines up with the Word of God, and not with the latest trendy leftist political causes. The message we share is vitally important, and we had better make sure we are proclaiming the one true message.

51 Replies to “Peterson and Homosexuality: Just What is the Message?”