The pro-homosexual marriage activists keep claiming our side is putting up a lot of red herrings and false diversions about legalising faux marriage. When we say that a vote for homosexual marriage means a vote for radical sex education, including the deplorable safe schools program and the whole transgender agenda, and much more, the other side claims there is no connection whatsoever.

But the simple truth is, the pro-homosexual sex ed programs and the like have always been part and parcel of the radical homosexual agenda, including the push for homosexual marriage. That has been crystal clear right from the beginning. One simply has to look at statements made by these radical left groups to see that this is indeed the case.

Yet so many in the media, in politics, and sadly even in so many of our churches are all insisting that homosexual marriage will be fine and nothing negative will follow on from this. They are quite clueless here. And sadly too many of these Christians seem to enjoy being armchair critics in all this. 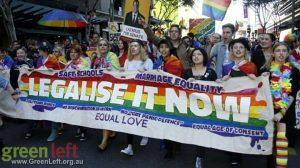 For example, one Christian leader recently actually attacked the Coalition for Marriage ad. He claimed it had “contested facts,” and was just a “Slippery Slope argument.” He said “these guys [were] speculating about related topics,” and asked why “no strong arguments in favour of retaining the definition of marriage” were given.

To be honest it greatly bothers me when so many devout and faithful Christians are working their tails off to defend marriage and family, and the gospel as well, and are taking all the heat for it, yet we have some of these critics who seem to enjoy taking pot-shots at them.

Was the ad perfect? Of course not. If the Coalition had a zillion more dollars they could do many more ads with differing messages. But you can only do so much with a 30-second ad and with very limited funds. Until these critics put up their own time and money to produce better ads, I think they need to just ease up with their constant criticisms.

And he simply is wrong in what he said. I and many others have long made solid arguments for the case for marriage. For example I have written three books on this, nearly 800 articles on homosexuality, nearly 400 articles on marriage, and over 100 articles on the transgender issue. Yet he implies we have no arguments to make for our case?

And “speculating about related topics”? These matters are all most certainly related, and it is indeed a package deal, as I will document in a moment. When we get homosexual marriage we get everything else as well: more safe schools indoctrination, more gender bending, more of the heavy hand of the law, more persecution of Christians, less gospel freedoms, etc.

As mentioned, simply listen to what the other side has been saying all along. I could fill this page just with all their banners and posters making this clear connection. They all carefully and clearly link the push for homosexual marriage with all the other radical agenda items, including the Safe Schools nonsense.

The evidence on this is so overwhelming that it actually seems foolish for me to have to once again state and restate the obvious. So let me just provide a few examples (of many) here, in no particular order:

Former Labor leader Mark Latham, who happens to favour homosexual marriage, has said this will ‘open a can of worms’:

I’m a supporter of same-sex marriage and would like to vote Yes in a plebiscite. But clearly Labor and Liberals have in mind a far broader definition of marriage….
Marriage equality is not just for gay couples. It involves a sweeping redefinition of marriage, extending to the other 247 gender/sexual categories. My advice to people would be: if you don’t understand the proposal, don’t vote for it. I won’t be.
www.dailytelegraph.com.au/news/opinion/mark-latham-samesex-yes-vote-will-open-a-can-of-worms/news-story/248eb22253826ed116f51eb08c353a48?nk=97677126c5652a1f709d3e3908e0824d-1504163850

Or look at one major player in all this, the Greens. In their LGBTIQ page they make the link crystal clear. The first item on their wish list is homosexual marriage, followed immediately by the Safe Schools program. They see both as essential and necessary.
greens.org.au/LGBTIQ

More importantly, simply listen to what Roz Ward, the co-developer of the Safe Schools program, said about the two issues a few years back:

It is a total contradiction to say we want (the) Safe Schools Coalition but you can’t get married to the person that you love. (Teachers) have to work in this context where we have this state-sponsored homophobia in this discriminatory law and still fight against homophobia. The question of equal marriage is important in every single school that I go to, because I talk to teachers and they say to me: ‘How can we continue to fight against homophobia when the students will say to us that same-sex couples or transgender people cannot get married to the people they love? The law says it’s not equal and then we need to turn around as teachers and say: well it should be but it’s not’.
www.theaustralian.com.au/national-affairs/education/antibullying-head-links-safe-schools-to-samesex-marriage/news-story/6a690a2e67406b2f33d96da12c4f287b?nk=97677126c5652a1f709d3e3908e0824d-1504139291

Um, if this homosexual activist and safe schools chief says the two stand or fall together, why are so many folks living in denial about this? But there is plenty more one can run with here. Consider this article on the need to go beyond marriage equality by Simon Copland, a member of the editorial board for Green Agenda. He admits this:

It is true that marriage has become an extremely important symbol and its passage would be seen by many as a significant milestone in indicating the willingness of the state to treat gay and lesbian people equally. Yet, unfortunately it is little more than a symbol. In Australia marriage equality actually has few practical impacts. State-based de-facto legislation gives same-sex couples practically all of the same rights as their married straight counterparts.

Of course they already have all the same rights as anyone else. Of course this is mere symbolism. I have been saying this for years now, as have many of the more honest homosexual activists. He even admits that legalising homosexual marriage is merely “symbolic gain”. He continues:

Campaigners have unfortunately been accused at times of pushing other issues under the bus in order to succeed on this one front. Short-term success is sometimes put ahead of long-term gain. This needs to change, with us in particular looking at marriage as part of a broader campaign for LGBTIQ rights — one that requires a strong progressive debate about sexuality and gender identification.
Marriage has become an extremely important issue for LGBTIQ people. Yet it is just one step on a very very very long road. We should be thinking a lot more about the other issues facing our community — issues that cannot be ignored any longer.
greens.org.au/magazine/national/beyond-marriage-equality

Years ago I carefully documented the many demands of the homosexual activists. They have plainly told us what they want. They have spelled out in detail their various lists of demands. They have made it clear about all the radical social transformation that must take place.

Homosexual marriage is just one of many major items on their wish lists. Read Strained Relations and Dangerous Relations for plenty of documentation and references on all this. Living with our head in the sand may seem comforting, but it is a dangerous place to be in.

When the other side clearly informs us about their aims and intentions, maybe we should start listening to them for a change, instead of living on another planet. The stakes are high, and we must take the opposition seriously. And we know full well from what they have said and written over the past 50 years, that homosexual marriage is just the tip of the iceberg.

28 Replies to “Homosexual Marriage, “Safe Schools” and Much More: A Package Deal”