OK, I thought I had finished writing about Tommy Robinson, his jailing, and the plight of young girls targeted by rape gangs in the UK. But since the story keeps bubbling along, and since critics keep coming out of the woodwork, going on search and destroy missions, I guess I must offer one more piece on all this.

Much of this has to do with questions about whether Tommy Robinson may have been guilty of breaking the law, and thus deserving any punishment he has gotten. You would have heard plenty of these sorts of criticisms over the past few days.

We obviously expect the left to come up with all this, as they hate people like Tommy and what they stand for. But there have been some conservatives who have also come out of late seeking to show that because he may have broken some laws, we simply cannot support him, and we should find someone else to champion. 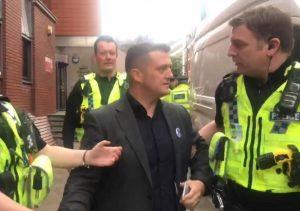 Well, sorry, but I do not buy this for a number of reasons. Sure, generally speaking, both conservatives and Christians have a very high view of human law, and we generally seek to respect it and obey it. But not always. Sometimes there is a time and a place to go beyond law keeping, when greater goods are at stake. But more on that in a moment.

Let me just deal with a few of these recent articles penned by conservative critics. The first thing to say is that some of these conservatives may not always be all that conservative anyway. They can often be quite wishy washy in various areas, or perhaps far more libertarian than conservative, and so on.

As just one example from here in Australia, we recently had columnist Janet Albrechtsen pen a piece saying we should not be supporting Tommy Robinson because he is a law breaker and he knew he would get into trouble for his actions, etc.

Let me simply repeat what I said to others who mentioned her article to me: Yes I am aware of her piece. Needless to say I do not fully concur with all of it. I of course will have to leave it to the legal experts to debate the finer points of all this. I claim no special expertise in law and jurisprudence.

But Albrechtsen has been at best a half-hearted conservative over the years, so she is hardly my first port of call when I want someone on my side. Given how iffy she has been in the past on some issues, I do not really consider what she has to say here as being all that important.

But more importantly, I will NOT let pieces like hers detract from the main issue here: that there are massive problems in the UK with Islam and with rape gangs; that Tommy and others have long been targeted; and that the powers that be do NOT want their voices heard.

The Islamic takeover of the UK continues apace, and I prefer to side, as much as possible, with people like Tommy who are – albeit quite imperfectly – doing what they can to warn us of the great evil unfolding there. But I seek to explain this more fully here: billmuehlenberg.com/2018/05/30/on-tommy-robinson-again-and-others-like-him/

Let me mention just one further conservative critic of Robinson. I refer to English Jewish commentator Melanie Phillips. If you do a search of her name on my site you will see I have often mentioned her and quoted from her. I have even done some reviews of her terrific books on my pages.

But here I am not as impressed with what she had to say. As with Janet and some others, I again beg to differ. It seems to me that when conservatives try to slam Tommy for possible laws being broken and the like, they may not always be helping matters that much.

Sometimes things come to that place where it is time to take a stand, even if it may mean violating some laws – often lesser laws. To suggest otherwise is NOT to hold to a conservative position. This is called civil disobedience. Sure, when one engages in this, being willing to face the consequences is usually a part of this. And it must be entered into carefully, usually as a last resort.

Conservatives – certainly Christian conservatives – do not believe that the rule of law is absolute and inviolate. It is very important indeed, and not to be sniffed at. It is what by and large separates free and democratic societies from barbaric ones.

But we never hold up human laws as being absolute. Sometimes there are bad laws that deserve to be resisted and/or changed. Sometimes a particular law is OK in itself, but it may need to be violated to obtain a greater good. A law about where a journalist can or cannot stand outside of a courtroom may not be onerous or evil. But there may be a time when even a law such as that may not be viewed as absolutely binding.

Again, I am not a legal expert, and it is not my intent to get into all the fine points of English law. But I have heard plenty of other knowledgeable conservatives who say this entire episode has been a travesty of justice. But I will let the experts in the various camps fight this out.

My point here is simple: sometimes a conservative or a Christian must, for sake of conscience, violate a certain law or set of laws. One can argue whether or not Tommy needed to run up against these particular laws in the UK. But to say that we must stop supporting someone because he may have resisted some laws is rather unhelpful.

One might as well argue that because Bonhoeffer may have broken the law, he deserved his imprisonment and eventual execution. Indeed, we should just forget about all that Nazi business. Um, sometimes civil disobedience is necessary to help stop great evil.

And as I have said repeatedly now, I may not approve of everything Tommy has said and done, but at the end of the day I prefer folks who care enough about horrendous evil to speak out, rather than all those armchair critics who shoot the messenger and usually do nothing to really turn things around.

So consider this to be a possible case of legitimate civil disobedience if you will. All true conservatives, including Phillips, should know that there is a place for this. It may not always be done perfectly, but we do not live in a perfect world. We may not always pick the right time or place to do this, but sometimes it must be entered into.

Here is not the place to go into all the details as to when and where civil disobedience may be appropriate or necessary. But I have written a number of pieces on this over the years. For more on these sorts of matters, see here: billmuehlenberg.com/2015/09/09/the-state-unjust-laws-and-civil-disobedience/

I repeat, not everything done by people like Robinson are necessarily right or expedient or helpful. I do not support all that he has said or done. But I support in principle the one who is willing to speak and to act, and to act knowing that severe consequences may be awaiting.

Robinson has been attacked in prison and elsewhere before, and it will likely happen again. He may well be killed while in jail this time. But he seems to be willing to take the risk, as he cares about his country, and all the victims of these demonic rape gangs. We all should care. Sure, some folks might run in different ways with how they express their care.

But I prefer to run with those who care. Sure, we prefer that the activists only acted with the most pristine of motives, only engaged with the very best and noblest of actions, and did everything in accord with perfect wisdom. That is the ideal. But in a fallen world the ideal is not always possible.

If I make some mistakes along the way in seeking to save the lives of young girls – or others – I sure hope that folks will remember me for what my main motivation was, not for any imperfections and shortcomings as I sought to implement those concerns.

Can he and others like him do things better? Sure. But give me one far from perfect activist any day of the week over a hundred armchair critics who prefer shooting the ones on the front lines while they stay quite safe, secure and comfortable at home.

At the very least, we all need to pray for Tommy. And for England. It may well be on its last legs, and time is running out.

For those impatient with lengthy articles like this, let me offer the following summary, with a bit more spice:

I know, let’s obsess over any perceived flaws or shortcomings of Tommy Robinson. That way we can:
-happily allow him to rot in prison;
-ignore all the horrific problems associated with Islam in the UK; and
-most importantly, totally forget all about the rape gang crisis and the tens of thousands of abused, raped and tortured young girls.

24 Replies to “Tommy Robinson, the Law, and Social Activism”