“Nothing will change when homosexual marriage is legalised.” We were of course told this a million times by the militants over the years, but I never believed a word of it. Sadly many folks did however. So now we are all paying the price for the activists’ war against everything, including reality itself.

These are scary days indeed, and getting darker by the moment. I have already documented far too many examples of the rainbow warriors’ assault on all dissenters, but each new day brings even more new horror stories. Here are four more to send shivers up your spine and curl your toes. 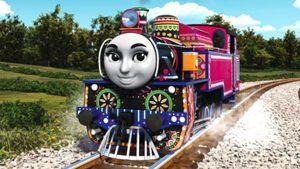 The first one comes from the UK. And yes, I thoroughly checked the page at least three times to make sure it was not just a satire piece. Here it is:

‘Thomas The Tank Engine’ has undergone the biggest update in the children’s favourite’s history after years of accusations of sexism, racism and classism. The TV show, based on the books by Rev Wilbert Awdry, will be relaunched next week with new multicultural and gender-balanced characters, 73 years after it was created. ‘Thomas & Friends’ will now feature Isla, an Australian Flying Doctor; Hong-mei, A Number 1 Blue Tank Engine from China, and Churubala, a female railway controller from India. This means the Steam Team is now gender-balanced, with three male and three female characters: Percy, James, Gordon, Emily and new characters Nia and Rebecca, as well as Thomas.
www.huffingtonpost.co.uk/entry/thomas-the-tank-engine-introduces-inclusive-gender-balanced-multicultural-characters-in-major-revamp-of-childrens-classic-thomas-and-friends_uk_5b8a5b3ae4b0162f4723bc87?pkj&utm_hp_ref=uk-homepage

Oh come on now – how dare you assume Thomas’s gender? And how dare you assume he is a tank engine? Perhaps he actually identifies as a green geriatric jellyfish, a lesbian mobile phone, or a Mexican-American accordion. Stop this narrow-minded bigotry and hateful stereotyping already!

My next two examples both come from Australia. I begin in the West:

In a proposal that’s guaranteed to make talkback radio, the Western Australian Law Reform Commission has recommended leaving gender off birth certificates, as well as adding a third official option of non-binary. Under current laws, children are assigned a gender by their parents before they reach 60 days of age. Critics say this is discriminatory to intersex people, places pressure on parents to nominate a gender, and makes officially changing a gender more arduous, as it means a change of birth certificate.

The commission recommends the birth certificate gender field should be left blank and a classification held on a confidential state register. The classification would include three options: male, female or non-binary. A person could apply to the Registrar for a ‘proof of sex certificate’. Other recommendations include:

-You would not need to undergo a medical procedure to have your gender identity officially recognised
-You could change your gender three times in a lifetime before having to seek the approval of a court
-If you are over 12 but under 18, you could seek to formally change your gender. If you don’t have the permission of your parents, the Family Court would decide.
www.abc.net.au/triplej/programs/hack/western-australia-may-leave-gender-off-birth-certificates/10180012

Good grief, the insanity continues. You might as well be granted the “right” to change your species three times in a lifetime, or change your need to eat or breathe three times a year. Anyone saying such lunacy just a decade ago would have been locked up. Now these mad hatters are running the country. We really are in deep doo doo folks.

The second Australian example is not any better alas:

One of Australia’s most popular wedding publications, White, has been criticised by contributors who say the magazine refuses to feature same-sex couples but won’t publicly admit it. Text messages between the magazine’s editor and a photographer reveal the publication isn’t including gay weddings.

Separately advertisers, photographers, videographers and celebrants have turned to Facebook this week to share stories about their interactions with White. Many say they’ve been ignored after they’ve submitted same-sex content. Photographer Lara Hotz noticed White didn’t make any reference to gay couples during 2017’s postal survey when 62 per cent of respondents supported changing the law to legalise same-sex marriage.
www.sbs.com.au/news/australian-wedding-magazine-under-fire-for-gay-silence?cid=news%3Asocialshare%3Atwitter

Oh the horror. That is just about as bad as David Attenborough’s Blue Planet not featuring cisgender swordfish, demi-boy blowfish, tri-gender octopi, or gender nonconforming tuna. When will all this hatred and discrimination end? How dare that dinosaur Attenborough keep reinforcing his bigoted and non-inclusive agenda? Liberate the seas now!

And we all know that Canada can never be left out of such lists of moonbattery and mayhem, so let’s look at one recent case from Ontario:

Threats of violence and expletive-laced phone calls from LGBT activists forced an elderly Ontario man to take down a billboard with messages about God’s will in regard to homosexuality earlier this week. “I thought I knew all the swear words, but this was a learning experience. I wasn’t even close to all the swear words and anger that came from the homosexual community,” said 81-year-old Ralph Baker in an interview Wednesday. “It’s been terrible.”

The Petrolia, Ontario resident had coughed up close to $10,000 for his billboard, which was placed in a farmer’s field at an intersection about 16 miles north of Chatham-Kent, last Wednesday. Its messages included: God says no to homosexuality & abortion; Bibles back in schools; Let the Bible be your teacher; Marijuana or peace with God, and; A ship without a rudder is tossed to & fro….

With his billboard, Baker was hoping people – particularly young people – who are struggling with homosexuality or unwanted pregnancies or other difficult situations would call him. “I was hoping for an opportunity to counsel people who are headed in the wrong direction,” he said. It didn’t work out that way. Instead, he claims he was threatened by members of the LGBT community. Callers apparently wished him dead.

Even the farmer on whose land the billboard was located — and who neither owned the billboard nor determined the message on it — was harassed, said Baker. “The farmer is receiving — and he has a wife and family — all of this stuff,” he said. “That’s not good … Even though I would like to keep it up, we have to take it down for the sake of safety.”
www.lifesitenews.com/news/lgbt-threats-harassment-force-ontario-man-into-removing-christian-billboard?utm_content=buffer7b993&utm_medium=WCDM%2BBuffer&utm_source=facebook&utm_campaign=WCDM

Just what is wrong with that old man? Doesn’t he realise that the People’s Republik of Canada has long ago outlawed freedom of speech and freedom of religion? These and other “freedoms” are of course relics of the dark and ugly past, and are no longer part of modern, progressive Canada. And isn’t that a good thing too?

So there you have it folks. Four more doozies from the militants. But hey, at least we can still rest in the knowledge that nothing changes when homosexual marriage gets the green light. Phew, that’s a relief alright.

9 Replies to “The Latest in Radical Rainbow Repression and Revisionism”