One of the leading pioneers in the intelligent design movement has been Michael Behe. In his first two books – Darwin’s Black Box: The Biochemical Challenge to Evolution (1996) and The Edge of Evolution: The Search for the Limits of Darwinism (2007) – he looked at the shortcomings of Darwinism, focusing on the “riddle of functional complexity in biology”.

Discoveries of DNA and proteins, and advances in our understanding of DNA as carriers of information, and the ability to sequence genes has led us forward in understanding life at its molecular level, and what was learned led to many troubling questions for standard Darwinist and Neo-Darwinist thinking. 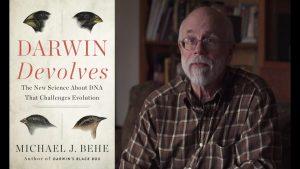 But we have advanced even further in the past few decades, and new discoveries mean new problems. Thus this book. In it Behe makes the case that random mutation and natural selection are actually quite “devolutionary”:

Darwinian evolution proceeds mainly by damaging or breaking genes, which, counterintuitively, sometimes helps survival. In other words, the mechanism is powerfully devolutionary. It promotes the rapid loss of genetic information. Laboratory experiments, field research, and theoretical studies all forcefully indicate that, as a result, random mutation and natural selection make evolution self-limiting. That is, the very same factors that promote diversity at the simplest levels of biology actively prevent it at more complex ones. Darwin’s mechanism works chiefly by squandering genetic information for short-term gain.

And again, “It’s taken a century and a half to realize it, but random mutation and natural selection are self-limiting. Two-edged swords, they both promote Darwinian evolution on a small scale and hinder it on a large one.” In 300 pages the American Professor of Biological Sciences explains all this with careful reasoning, scientific insight, and splendid prose.

So much of the new information that science is giving us through new scientific tools is making the old grand evolutionary scheme seem increasingly implausible. With new tools like electron microscopes, X-ray crystallography and magnetic resonance we are learning so much about the physical basis of life. Says Behe:

“The details of studies fill libraries, but the overarching picture is one of fathomless elegance – a seemingly never-ending parade of sophisticated structures, brilliant organizational arrangements, and well-nigh incomprehensibly complex systems.”

Life even at the molecular levels seems to be brimming with complexity, purpose and intelligent design. The notion of telos or purpose, promoted way back by the ancient Greek philosophers, is still the best way to understand how things work. And information and purpose are best explained by an intelligent cause – by a purposeful mind.

Of course much of this goes against the mainstream grain. Those immersed in scientism – as opposed to real science – philosophical naturalism, and atheism hate the very thought of this being the case, so they prefer to push conceptually much more bizarre or questionable explanations for what we find.

Reverting to his old example of irreducible complexity – the mousetrap – he says this: “For decades opponents of intelligent design have tried and failed to find a plausible Darwinian route even to a simple mechanical mousetrap.” Instead of following the evidence wherever it may lead, they doggedly cling to naturalism and materialism, and dismiss any rival options – even if they seem much more sensible.

Behe is fully up on the literature on these matters, and discusses the various theories being offered to deal with this staggering array of new findings and new information. He fairly and accurately lays out some of these proposals, showing the various shortcomings they entail.

Thus he examines some of the “potential supplements and alternatives,” including Michael Lynch’s neutral theory and Stuart Kauffman’s complexity theory. “Can one of them pick up the ball that Darwin fumbled? The answer is a flat no. . . . [N]one of them have the resources to explain the basic, functional, sophisticated molecular machinery of life. In fact, none even try to do so.”

He also closely discusses the scientific data, presenting in readable fashion the latest findings. Plenty of detail is offered, along with some of the big picture analysis. He reminds us for example that in his 1996 volume he had surveyed the evolutionary literature and demonstrated that

despite the serene confidence of many biologists, in fact there were no publications at all that described in anything like testable detail how random mutation and natural selection could account for the sophisticated molecular machinery of the cell, let alone experiments that demonstrated it. More than two decades later—despite the uproar caused by the book, despite much bluster and chest thumping in the media—the situation is unchanged.

Again, the various Darwinian schemes simply cannot properly account for the elegant structures of life. What does best account for them is mind and intelligence. Design always presupposes an intelligent designer. Again, those pre-committed to philosophical naturalism and scientism do not like such proposals.

So now we have come to the odd place where some philosophers and scientists actually deny the reality of the mind altogether. There is simply a slab of meat – the brain – and no more. Our thoughts, reasoning, memories, rationality, consciousness and even free will are all non-existent – or are at best reducible to mere physical causes – end of story.

But no one actually lives this way, except for some intellectuals in ivory towers. The truth is, we perceive the mind “in the purposeful arrangement of anything – events, for example.” He continues:

Stones placed into the shape of, say, an arrow pointing the way back to camp testify to the mind that conceived it. And, most especially in our era, intelligence is seen in the arrangement of pieces of complex machinery that are shaped to fit with each other to form a purposeful coherent whole— anything from the most advanced computers down to a humble mousetrap. In any of those arrangements we easily recognize a designing mind.

As for the rest of nature, so too for living things. The machinery of life is stunningly sophisticated, so much so that the overpowering appearance of design is acknowledged by virtually everyone, even by those who doggedly resist that conclusion….

Biology is suffused with a multitude of parts arranged purposefully, especially at its foundational level. Bacterial flagella, tank treads, sophisticated gene regulation, insect gears—all of those display more purpose than many of the things in our everyday lives whose design we instantly recognize. The degree of intelligence exhibited in life’s physical structures is light-years beyond what we modern humans have the capacity to produce.

Such is where the evidence leads. But a brief, sketchy review like this hardly does this book justice, so I urge you all to get a copy and read and study it for yourself. Thank you Michael Behe for your ongoing work in this area. It is so very much needed.

8 Replies to “A Review of Darwin Devolves. By Michael Behe.”