All that Trump needs to do to win in 2020 is let the Democrat contenders keep opening their mouths!

Yes I know: this is an article that is really not able to live up to expectations. Just seven? It seems every time a Democratic contender for the US Presidential bid opens his mouth, he has qualified for the most idiotic proposal. They just keep pouring out at an alarming rate.

While it is good fun to watch the two dozen or so presidential hopefuls stumbling over themselves, each one trying to prove he is more to the left than the others, the scary thing is this: it is just possible that one of them might one day actually make it into the Oval Office. 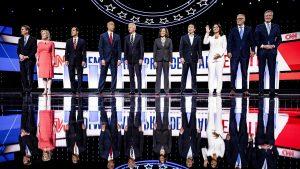 Sure, at the moment their hyper-leftism is the best thing going for Trump’s re-election prospects. Just let them keep talking – every time they do, they dig their graves even further, and boost Trump’s chances for 2020. But these proposals are not just nutty: many are downright dangerous, and if one day one of these Dems does take over the White House, we are all toast.

So I need to control myself here, and just restrict their madness to a mere seven dumb ideas. Here is my list, in no particular order.

Reparations, not just to blacks but to homosexuals

The idea of reparations for Blacks because of past wrongs regarding slavery is a common theme among the Democrat contenders. And I have written elsewhere why this proposal is certainly a dumb and unworkable idea: billmuehlenberg.com/2019/06/15/reparations-for-slavery-social-and-political-considerations/

But it gets even nuttier with some of them now saying we must do the same with homosexuals. I kid you not. Consider just one shocker of a headline: “Elizabeth Warren Wants to Give $57M in Taxpayer Money as Reparations to LGBT Couples”. The story begins this way:

Last week, Democrats wanted the federal government to pay reparations for slavery. Now, Democratic presidential hopeful Sen. Elizabeth Warren (D-MA) wants to spend taxpayer money to give tax refund reparations to same-sex couples who had to file as individuals before their marriages were recognized by the federal government. Warren has introduced a bill named S.1940, known as the Refund Equality Act, which would force the federal government to pay refunds to homosexual couples that they would have allegedly received before the Supreme Court legalized same-sex marriage in the case of Obergefell v. Hodges in 2015.
www1.cbn.com/cbnnews/politics/2019/june/elizabeth-warren-wants-to-give-57m-in-taxpayer-money-as-reparations-to-lgbt-couples?

I suppose once we bankrupt the nation fulfilling that moonbeam payout, we can keep going. How about reparations for all those who have had an abortion but some pesky pro-lifer made them feel bad about destroying the fruit of their womb? And of course bank robbers feel bad because of all the social stigma attached to their lifestyle choices. What about their payment? The list is endless.

Free healthcare for all is a routine demand being made by most of the Democrats seeking to displace President Trump. This is bad enough, but some of them are so inclusive that they want all of the nation’s 22 million illegal immigrants to get it as well.

Around half of the candidates at a recent debate put up their hands when asked about whether they support this. Wow. Sounds like a plan. After all, Bernie Sanders has already told us that Americans would be happy to pay more taxes. So let’s do it and make America even more inclusive! And more broke.

That abortion rights is very high on the list of Democrat demands is perfectly obvious, with every single one of the current crop of contenders fully pushing for it. But things get even more bizarre with folks now talking about abortion rights for all – and that includes men!

Consider what Texan politician Julián Castro said in a debate when asked about abortion funding. He said this: “I believe in reproductive justice, and what that means is just because a woman — or, let’s not forget someone in the trans community, a trans female — is poor doesn’t mean they shouldn’t have the right to exercise the right to choose.”

Hey, who am I to judge? If we insist that taxpayers now fund abortions for men, I guess we just need to move with the times. You can’t stop progress after all. And while we are at it, let’s force taxpayers to subsidise having tampons in male toilets. Oh, sorry, that is already happening in many places in the US.

Free education for all

There is a very long list of demands for free stuff from the leftists and socialists. The Democrats of course excel at this. A very quick overview of most recent American elections tells us this: a whole lot of people will always vote for Santa Claus. Whoever offers the most free stuff can often get the most votes. That effectively explains how Obama beat Romney in 2012.

But as Rep. Dan Crenshaw (R-Texas) rightly said, the moves to cancel student debt is immoral: “When you say #cancelstudentdebt, you’re saying a minority of people who had the advantage of obtaining a degree should have their debt paid off by hardworking taxpayers, 2/3 of whom don’t have degrees themselves, or already paid their own student debt off. This is immoral.”
thehill.com/homenews/house/450183-republican-lawmaker-plan-to-cancelstudentdebt-is-immoral

Overwhelmingly Democrats favour lowering the voting age, at least to 16 – for starters. As just one example, Beto O’Rourke from Texas certainly wants it lowered. But he is the same guy who acknowledged that he was just a stupid teen when he wrote a vile “murder fantasy” about running over children with a car.

In fact, a case might even be made for raising the voting age, not lowering it. A radical proposal, yes, but no less radical than the calls being made to lower it. But for more on this, see how one writer seeks to make the case: fee.org/articles/don-t-lower-the-voting-age-raise-it/

If Democrats do not want to outright abolish the Immigrations and Customs Enforcement, they at least want to severely restrict it and curb funding for it. This important government body, along with the United States Border Patrol, is at the front lines of protecting American borders and keeping illegals – including criminals, drug runners and sex traffickers – from waltzing across the borders.

As to those seeking to abolish ICE we have Democrats like Miramar, Florida mayor Wayne Messam and NY mayor Bill De Blasio actually seeking this. As to those in favour of the diminution of its powers and authority, almost all the other candidates are calling for this.

Felons should be able to vote in prison

Yes voting rights for prisoners. You can’t make this stuff up folks. When Kamala Harris was asked about this very matter – even including people on death row and inmates like the Boston Bomber – she said with a straight face, “I think we should have this conversation.”

Not to be outdone, Bernie Sanders put it this way: “I think the right to vote is inherent to our democracy – yes even for terrible people”. And Beto O’Rourke said that he believes America needs to “rethink” granting the right to vote to those in prison.

As I say, the list is really endless. So many more things can be mentioned, be it the push to get rid of the electoral college, the Green New Deal, socialism on demand, New Age guru Marianne Williamson talking about ‘dark psychic forces’ and so on. This is a party of fruit loops, and the further left they all go, the more re-electable Trump becomes.

The moral and mental meltdown of the Democrats is almost complete. But hey, it’s early days. I am sure we will see even more cases of zany, off-the-planet proposals being made in the days ahead. One really has to wonder: just how much is Trump paying these guys to keep saying these things?

8 Replies to “The 7 Most Idiotic Proposals by Democrat Contenders”