How would you live if you knew the world was going to end today?

So what would you do if you knew the world was going to end in 12 hours? Yes I know, the hyper-leftist American Democrat Alexandria Ocasio-Cortez is talking about the world ending in 12 years, joining a long-list of green nutters and chicken littles, but here I am talking about things coming to an end a bit sooner!

What is all this about? Let me explain. The other night I watched maybe twenty minutes of a film on television which had the ‘12 hours till the end’ theme. But it was late so I went to bed and did not see the rest of it. But the next day I did a net search and learned more about the movie. This is from a wiki piece on it:

“These Final Hours is a 2013 Australian apocalyptic thriller film… The film takes place in Perth, and begins ten minutes after an asteroid has collided with earth in the North Atlantic, leaving approximately twelve hours until the subsequent global firestorm reaches Western Australia.” 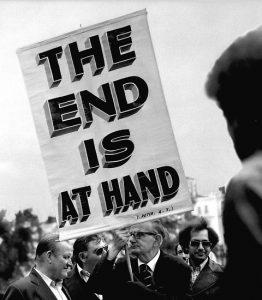 I had two main thoughts racing through my mind as I went to bed that night and reflected on what I had just seen. The first was this sad fact: The veneer of civilisation is exceedingly thin indeed. That is, what keeps things stable, peaceful and orderly in society – at least in the West – is very fragile and tentative, and it does not take much for the real face of fallen humanity to raise its ugly head.

When folks realised that everything was coming to an end – and real soon – then all hell broke loose. Civilisation and its restraints crumbled, and people did what they always wanted to do, but could not readily do because of law and order and other constraints.

Thus in the film one young girl was snatched by two evil men and taken to a house to be locked up and sexually assaulted. And why not? The world is coming to an end so let’s just give in to every urge and impulse we have. Just go for it!

I recall many years ago the lights went out for a long period of time – maybe for a week or more – in New Zealand I believe – maybe Auckland. Not surprisingly, crime rates and the like went up. When normal restraints and constraints are taken away, the real picture of fallen humanity emerges.

If one is not restrained internally (say, by conscience), then only external restraints (like the police) will suffice. That is what the biblical storyline makes clear. It is either conscience or cops. And even our fallen conscience is far from perfect, and can easily lead us astray.

Speaking of evil and restraints, the truth is this: thankfully the world is not as evil as it could be. That should be good news for all of us. If you thought things were bad now, just imagine how much worse things could be if there were no restraints on evil.

In a sin-soaked world, God has graciously provided various means to restrain evil. What are these restraints? Four of them are usually mentioned: conscience, family, government or civil authority, and the church. Each of these plays a role in restraining – at least to some extent – the selfish and evil urges, impulses and desires of fallen mankind.

They put a check on the free flow of evil, and they help slow down the urge to run amuck and sin with abandon. So we can be thankful that God’s common grace is showered upon all of humanity, and these various restraints are in place to keep this world from degenerating into a totally anarchistic and demonised hell on earth.

But a second thing came to mind as I reflected on the film the other night. What would I do if I knew the world was coming to an end in 12 hours? The first thing I thought of was to get on the phone and call as many friends and loved ones as possible and give them the gospel.

All Christians would do the same I trust. Nothing is more important than making sure you are right with God through Christ. If we knew that our lives were just about to come to an end, then seeking to assure ourselves and others that we are ready to face eternity would be the only sensible course of action.

Of course in one sense this might be a bit like death-bed conversions. One wonders how genuine or reliable they might be. If a person has rejected God all his life, will a last second prayer of salvation really cut it? Nonetheless, I am sure there can indeed be some real death-bed conversions, and there could also be genuine ones in an end-of-the-world scenario as well. But far better to get right with God now, instead of putting it off.

In conclusion, all this is an interesting thought experiment. Just how would we live if we knew the end was just around the corner? Would it change anything? And for the Christian, this raises questions as well. In one sense, all believers should live like this all the time, with a sense of urgency.

We should live as if each day could be our last. We should always live in the light of eternity, and we should have our priorities adjusted accordingly. But on the other hand – especially given that no one knows for sure when the world will end, or when Christ will return – we should live lives that reflect wisdom and common sense. We plant gardens and build houses, and find steady employment and do all the normal things that we do for our three score and ten.

A quote attributed to Luther says, “If I knew the world was to end tomorrow, I would still plant an apple tree today.” Apparently, he didn’t actually say this, and it may first have arisen in the 1940s by German believers under the Nazi regime to give them hope and perseverance.

Whatever the source of the quote, the point is well-taken. We are to ‘occupy till Christ comes’ as we find in Luke 19:13, and we need not let end-times speculation render us ineffective for the kingdom. Even if he does return in our lifetime, we still have a lot of work to do.

Sure, if I knew for sure that he was returning in 12 hours, I likely would not order any more books from overseas, I probably would leave the stack of dishes in the kitchen, and I would not be inclined to mow the lawn. Again, I would tell as many as I could about their need of a Saviour.

So how do we live our lives today? It seems with a combination of urgency as well as responsibility. If you sense God calling you to do a four-year BA degree, then do it. But also be aware that life is short, and the person you were intending to witness to could meet an untimely end at any point.

So we need to live sensible lives, being responsible to raise our families and the like, but we also need to have a sense of biblical priorities in life, with the realisation of the nearness of Christ’s return also informing and colouring how we live. He will come back one day. Are we ready?

13 Replies to “Thinking About the End of the World”