What are we to make of the latest comments by Israel Folau?

Star Rugby player (or ex-Rugby player) Israel Folau is in the news again for appealing to ancient Israel and the issue of natural disasters and the judgments of God. He said the nation’s laws on abortion and homosexuality have led to the bush fires and drought Australia has recently experienced.

He mentioned the ancient Israelite prophet Isaiah in a Sunday sermon about God judging the earth because of the sins of the people, and he sought to find parallels with Australia today. And for doing that, all hell has once again broken loose. Everyone is up in arms. 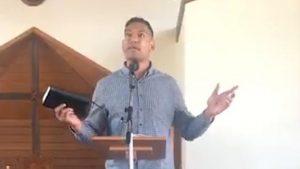 Secularists are of course completely outraged, but all sorts of trendy lefty Christians are also condemning him big time. Let me first offer a few more details on this matter, and then present a bit of commentary. One news item – which was a bit less severe on Folau than many others – said this:

In his latest sermon, Israel Folau has linked the bushfires and drought which have ravaged NSW and Queensland to same-sex marriage and abortion legislation. Speaking at The Truth of Jesus Christ Church in Kenthurst, north west of Sydney, Folau has again delivered yet another sermon which has taken aim at homosexuals.

He has since launched legal action, reportedly seeking $10 million in damages, believing he has been discriminated against because of his religious views. Folau is set to return to court in December ahead of a trial in February 2020 if mediation is unsuccessful. But in his latest sermon, Folau linked the devastating natural disasters to recent legislation. www.news.com.au/sport/sports-life/israel-folau-preaches-bushfires-and-drought-are-gods-punishment-for-samesex-marriage-and-abortion/news-story/1342cc45c7bdd686d99e56e97b608fcf

Another article with this title featured plenty of criticisms: “Fiery reaction after Israel Folau links Australian bushfires to same sex marriage.” Here are just two of them:

Even staunch ally Alan Jones condemned the comments. “Israel is a lovely human being, I know him well. But, Israel, button up,” Jones said on his 2GB radio program. “These comments don’t help.”

Others were saddened. “As a Christian I feel so desperately sad reading that because that’s not the nature of God, that’s not the heart of God … I feel like wearing a T-shirt saying ‘not on my team’,” Sky News contributor Gemma Tognini said. www.news.com.au/sport/sports-life/fiery-reaction-after-israel-folau-links-australian-bushfires-to-same-sex-marriage/news-story/35d07139e6ba4b69fae67a3388071a97

These were two of the milder complaints levelled against Folau. Plenty of other much harsher comments were made. So what are we to make of all this? Let me give a short answer and a long answer. Briefly, if he had simply said “These natural disasters may be part of God’s judgment on a sinful nation” I would have no problems with it.

But let me give a longer version of this. That God can and does use natural disasters, wild weather, floods, fires and all sorts of other things as a means of bringing judgment both to Israel and the nations is absolutely clear from Scripture. There are many dozens of verses on this found in Scripture.

Indeed, I have already penned a number of articles on this matter over the years, such as: billmuehlenberg.com/2017/09/10/hurricane-irma-god-natural-disasters/

In those and other related articles I list just some of the many Bible passages that speak directly to this. God is God, and he is actively involved in the affairs of this world. Christians are not deists, who believe that God is little more than an absentee landlord.

Instead, he is personally involved in the affairs of men – and that can include bringing judgment on them. In my own personal concordance, I have collected a hundred passages which speak to this. Let me offer just two from the Old Testament, one directly aimed at Israel and the other to a pagan nation:

Deuteronomy 28:20-24 The LORD will send on you curses, confusion and rebuke in everything you put your hand to, until you are destroyed and come to sudden ruin because of the evil you have done in forsaking him. The LORD will plague you with diseases until he has destroyed you from the land you are entering to possess. The LORD will strike you with wasting disease, with fever and inflammation, with scorching heat and drought, with blight and mildew, which will plague you until you perish. The sky over your head will be bronze, the ground beneath you iron. The LORD will turn the rain of your country into dust and powder; it will come down from the skies until you are destroyed.

But the God of the Old Testament is the same God of the New Testament of course. God still judges evil. Thus we find similar things mentioned there, such as this passage:

Revelation 6:7-8 When the Lamb opened the fourth seal, I heard the voice of the fourth living creature say, “Come!” I looked, and there before me was a pale horse! Its rider was named Death, and Hades was following close behind him. They were given power over a fourth of the earth to kill by sword, famine and plague, and by the wild beasts of the earth.

And notice who is behind all this: none other than the Lord Jesus Christ. Contrary to the compromised Christians who think Jesus was just some peacenik who would never hurt a fly, the book of Revelation reveals him to be King of Kings and Lord of Lords who executes judgment on unrepentant nations and individuals.

But I return to my initial short answer. God certainly uses natural elements to achieve his purposes. The Bible is crystal clear on this. The only issue here is this: are all such acts always divine judgments, or something else? In the OT we had divinely inspired prophets who could offer us divine commentary on such things.

But I am not divinely inspired, nor is Folau. So at best, all we can say is something like this: “Such natural disasters may well be part of God’s judgment on a sinful and rebellious nation that has overwhelmingly turned its back on its Creator and King.”

That is a biblically fair call to make. But to say it definitely is – or is not – would be something I could not say with certainty. The biblical principles are clear: sin always has consequences, and it will always be judged, either in this life or in the next.

While the judgment of sin took place at the cross and forgiveness is available for those who repent, those who persist in sin and rebellion against God are still under his just judgment. So whether God uses a flood or a fire or whatever to mete out such judgment in our day, or whether this judgment comes latter in the next life, sin WILL be dealt with.

And while a passage like 2 Chronicles 7:14 has at its primary interpretation the ancient Israelites, there can well be a secondary application for us today. I discuss this here: billmuehlenberg.com/2015/05/02/2-chronicles-714-in-context/

Let me close by offering the last three paragraphs of that article here:

In sum, there is nothing wrong with citing this verse or praying this verse. But remember the context: disobedience will bring the judgment of God. Today our blessings are more spiritual in nature, and so too the judgments. A batch of bad weather may or may not be part of the specific blessing or curse of God.

But for Christian churches and individual Christians to check their own hearts and see if known and un-repented of sin still lurks is always a good exercise indeed. There may well be various spiritual blockages or setbacks because of such disobedience.

So if we want to see the full blessing of God in our lives, we must make sure that we are dealing with any and all acts of disobedience. Simply praying this prayer in the hopes that our nation will be turned around, without dealing with the disobedience issue – either as individuals or the church – and engaging in heartfelt repentance, will be an exercise in futility.

62 Replies to “Israel Folau, Ancient Israel, and the God Who Is There”