If you are a Christian or a conservative, your days are numbered:

It is no longer business as usual. Gone are the days when Christians and conservatives who publicly affirm their beliefs and values are left alone, or tolerated. Now they are being hunted down. It is as if they are all walking around with large targets affixed to their backs.

It is now open season on anyone who dares to identify as a conservative or a Christian. And if you identify as both in any sort of public fashion, that is especially going to result in you being targeted by the secular left. Every day things are getting worse in this regard. 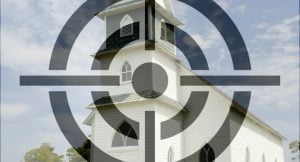 It is not full-blown persecution – yet. But it certainly is moving in that direction. The cases are far too numerous to just write an article on each. So I often have to double-up – and then some – as I will do here. Six new examples of this war on Christianity and conservativism can be examined – and lamented.

Let me begin in Australia and then head overseas. Most people would be aware of the ongoing controversy with Margaret Court, especially since the Australian Open is still running. She is without question the greatest female tennis player ever. But because she is now a Christian who stands for biblical truth, including the issue of homosexuality, she is treated like dirt by so many of our elites.

For years now she has been hounded and attacked, and just a few days ago a deplorable stunt was pulled by US tennis brat John McEnroe and lesbian Martina Navratilova. They unfurled a banner asking that the Margaret Court arena be renamed.

Their unethical and inappropriate protest resulted in Tennis Australia having to rebuff them, and so they then offered a very lame ‘apology’. Indeed, McEnroe simply doubled down and further attacked her: “What she said in the past, her comments, to me go over the line of what should be acceptable.” www.theaustralian.com.au/sport/tennis/australian-open-2020-day-11-live-coverage-is-this-sports-most-insincere-gesture/news-story/75dd55d517f1b9dc126eb58227d4385d

Hey John, many of us find you and your behaviour to be unacceptable. So much for all this tolerance and openness you keep carping about. You want everyone who dares to think differently to you and the PC crowd to be banished into silence and shame. I would prefer that you be banished to be honest.

My second Australian example has to do with former sexologist and feminist Bettina Arndt who has shifted in her views over the years, and is now actually involved in various conservative causes, including the men’s rights movement. For daring to move to the right secular leftists are going hysterical.

Their rage and venom increased exponentially when she received an Order of Australia award just days ago. Angry lefties are now demanding that she be stripped of this honour. Arndt said in reply, “People have to understand that this is an orchestrated campaign against me. These accusations are deliberately being used to try and damage me. I am not doing anything wrong. And yet there is this smear job going on.”

She continued, “I am being absolutely overwhelmed with responses from men and women all across Australia thanking me for what I’m doing, thanking me for being a voice for men, in a world where men are getting unfair treatment. Feminists are determined to shut down anyone who challenges the anti-male culture that exists in our society.” www.9news.com.au/national/bettina-arndt-slams-victorias-attorneygeneral-for-calls-to-revoke-her-australia-day-honour/d298eeae-c0a4-48fd-8a29-b88b2c779e05

Perth-based law professor Augusto Zimmermann said this: “Of course, the feminist backlash against her well-deserved award merely reveals the illiberal, fascistic nature of modern feminism. It is indeed quite revealing to see all these rabid feminists exposing their poisonous determination to retain control of the narrative. As Bettina points out, ‘It’s a wonderful demonstration of the threat I pose to their dangerous ideology’.”

Instead of defending religious liberty and free speech, they caved to the LGBT bullies. So far at least three venues have canceled Graham’s rally – and more are expected. Graham said on the Todd Starnes Radio Show they are working with attorneys and they plan on fighting back. He said thousands and thousands of British Christians are being disenfranchised. “Their rights are being trampled on by these city governments and the gay lesbian movement,” he said.

Graham said it’s disturbing that militant LGBT activists want to push Christians into the church house and off of church property. He likened it to what the Soviets did to people of faith. “It’s a freedom of speech issue it’s also a religious freedom issue,” he said. www.toddstarnes.com/faith/if-the-lgbt-activists-are-permitted-to-silence-franklin-graham-they-will-eventually-silence-all-of-us/

Another case from the UK concerns commentator Katie Hopkins. She is evidently “far-right” so that means she is especially evil:

Far-right commentator Katie Hopkins has been suspended from Twitter following calls for the social network to carry out a “full review” of her account. Campaigners had accused her of spreading hate on the platform, where several of her tweets have been shared by Donald Trump, the US president. Ms Hopkins’ account has more than one million followers, having survived a series of Twitter takedowns targeting activists including Tommy Robinson and the far-right group Britain First.

The only tweet still visible on her main profile page on Thursday morning was from a critic accusing her of inciting racial hatred in messages directed at the rapper Stormzy. Twitter said that Ms Hopkins had been temporarily locked out of her account for violating the site’s hateful-conduct policy, which bans the promotion of violence or inciting harm on the basis of race, religion, national origin or gender identity.

The move came a little over a day after Rachel Riley, a co-presenter of Channel 4’s Countdown and an anti-racism campaigner, met Twitter representatives calling for them to review and remove Ms Hopkins’ account. The meeting was organised by the Centre for Countering Digital Hate (CCDH) campaign group, which called for Twitter to permanently delete the account. www.independent.co.uk/news/uk/home-news/katie-hopkins-twitter-suspended-deleted-review-a9309351.html

Good grief. Of course one need not agree with all she has said. Indeed, one can ask just how much of a conservative she is across the board. For example, just five years ago she was proposing euthanasia vans because the UK has “far too many old people”. That is not quite a position conservatives or Christians are keen to champion.

One final act of secular left persecution from that part of the world deserves a mention:

A teenager with Aspergers was fined nearly $800 and placed under a strict 3-month curfew for asking an apparently transgender police support officer, “is it a boy or is it a girl?” Declan Armstrong (19) is said to have offended the officer, Connor Freel, who was reportedly left “upset and embarrassed” by the question. Freel’s counsel elaborated on how he reacted:

“To have something shouted at him that had such personal connotations whilst he was on his own in the middle of a public place that was rather busy due to market day footfall did leave him vulnerable, distressed, and embarrassed.” It also made Freel “reluctant” to work by himself in the future.

While Armstrong denies asking the question, he was convicted of violating the Welsh Public Order Act 1986 by “using abusive or insulting words with intent to cause harassment.” His sentence was also raised from “a low level to a medium level community order because of its transphobic nature.” Of the fine, $261 went directly to Freel. thenationalpulse.com/social-issues/teen-with-aspergers-placed-on-house-arrest-fined-for-asking-trans-police-officers-gender/

Wow, why don’t they just line us all up and shoot us already? And in America things are getting just as bad. Consider what will take place on Monday: around 100 million people will watch the Super Bowl. Just as riveting as the actual football game are all the mega-priced television ads that appear throughout the broadcast.

This year for the first time ever an ad featuring drag queens will be run. However, a prolife ad looks like being rejected by the network. Go figure. As one write-up of the story puts it:

FOX Sports apparently has no problem airing controversial ads during the 2020 Super Bowl — just not a pro-life commercial. According to NBC News, this year’s big game between the Kansas City Chiefs and the San Francisco 49ers will include a commercial featuring drag queens/LGBTQ activists.

Meanwhile, pro-life advocates with the new Faces of Choice organization said they have been waiting at least six months for an answer from FOX about their ad. The drag queen ad from Sabra hummus already is stirring up controversy. It features drag queens Kim Chi and Miz Cracker from “RuPaul’s Drag Race.” LGBTQ marketing strategist Bob Witeck celebrated the significance of the ad. www.lifenews.com/2020/01/29/fox-allows-super-bowl-ad-with-drag-queens-wont-approve-pro-life-commercial/

As far as the drag queen ad goes, there is a petition circulating calling for this to not be shown during this family viewing event: www.returntoorder.org/petition/tell-the-nfl-stop-promoting-drag-queens-at-the-super-bowl/

And the powerful and moving 2-minute prolife ad can be seen here: www.youtube.com/watch?v=hm24p8cBPKQ

As I said, if you are a conservative or a Christian in today’s West, your days are numbered. They ARE after you. And they will not stop until all of us are finally and forever silenced.

15 Replies to “Open Season on Christians and Conservatives”