Was Jesus a lawbreaker?

A few hours ago I wrote a piece entitled “Would Jesus Wear a Face Mask?” It was of course all rather hypothetical, since there were no face masks back then – at least for medical purposes. But I looked at various issues raised by such a question, and concluded by saying that he probably would not have. You can see that piece here: billmuehlenberg.com/2020/07/17/would-jesus-wear-a-face-mask/ 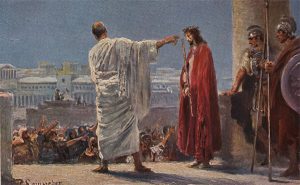 That article, not surprisingly, generated a bit of discussion. One person on the social media answered my question this way: “I don’t believe so, unless it was a Federal Law.” But of course that reply raises some other questions, such as: Did Jesus violate any laws while on earth? Would he have? If so, what sorts of laws?

These kind of questions are worth exploring a bit more. And the question we would have to ask at the outset is this: Just whose law are we referring to here? There were at least two sets of laws that can be mentioned: Jewish law and Roman law. Did Jesus violate any of those laws?

As to Jewish law, and/or Mosaic law, it was charged by the Scribes and Pharisees that Jesus did indeed violate their laws. An obvious set of examples has to do with Jesus and the sabbath. They thought he was disobeying the law when it came to doing things on the Sabbath – even healing people.

But Jesus responded to these charges by claiming that they had added all sorts of man-made tradition and spin to the original laws. As but one example, consider this exchange found in Mark 2:23-28:

One Sabbath Jesus was going through the grainfields, and as his disciples walked along, they began to pick some heads of grain. The Pharisees said to him, “Look, why are they doing what is unlawful on the Sabbath?” He answered, “Have you never read what David did when he and his companions were hungry and in need? In the days of Abiathar the high priest, he entered the house of God and ate the consecrated bread, which is lawful only for priests to eat. And he also gave some to his companions.” Then he said to them, “The Sabbath was made for man, not man for the Sabbath. So the Son of Man is Lord even of the Sabbath.”

It was their interpretation of the law that was being violated, not the law itself. That was the real issue back then. Jesus did not at any time urge people to violate Mosaic law, but he did often have to correct their faulty understanding of the law. Indeed, as he said in Matthew 5:17, “Do not think that I have come to abolish the Law or the Prophets; I have not come to abolish them but to fulfill them.”

And Jesus insisted that no one could accuse him of breaking the law. As we read in John 8:45-47, “Everything I have told you is true, and you still refuse to have faith in me. Can any of you accuse me of sin? If you cannot, why won’t you have faith in me? After all, I am telling you the truth. Anyone who belongs to God will listen to his message. But you refuse to listen, because you don’t belong to God.”

Had he broken the law of God he would have not been sinless. Yet the New Testament often affirms the sinlessness of Jesus. Consider just two such passages:

2 Corinthians 5:21 For our sake he made him to be sin who knew no sin, so that in him we might become the righteousness of God.

Hebrews 4:15 For we do not have a high priest who is unable to empathize with our weaknesses, but we have one who has been tempted in every way, just as we are—yet he did not sin.

So as far as the Jewish/Mosaic law is concerned, he did not break it, nor would he have. And neither could he have, being fully God as well as fully man. But we also have the Roman law to consider here. Did Jesus break any existing laws of Rome at the time?

Some folks of course tried to argue that he had committed treason and the like. But recall the words of Pilate after he closely cross-examined Jesus. The account in Luke 23 is telling. Verses 1-5 say this:

Then the whole company of them arose and brought him before Pilate. And they began to accuse him, saying, “We found this man misleading our nation and forbidding us to give tribute to Caesar, and saying that he himself is Christ, a king.” And Pilate asked him, “Are you the King of the Jews?” And he answered him, “You have said so.” Then Pilate said to the chief priests and the crowds, “I find no guilt in this man.” But they were urgent, saying, “He stirs up the people, teaching throughout all Judea, from Galilee even to this place.”

We then read about him being sent to Herod for further questioning. After this he was returned to Pilate, and we read this in verses 13-22:

Pilate then called together the chief priests and the rulers and the people, and said to them, “You brought me this man as one who was misleading the people. And after examining him before you, behold, I did not find this man guilty of any of your charges against him. Neither did Herod, for he sent him back to us. Look, nothing deserving death has been done by him. I will therefore punish and release him.” But they all cried out together, “Away with this man, and release to us Barabbas” – a man who had been thrown into prison for an insurrection started in the city and for murder. Pilate addressed them once more, desiring to release Jesus, but they kept shouting, “Crucify, crucify him!” A third time he said to them, “Why? What evil has he done? I have found in him no guilt deserving death. I will therefore punish and release him.”

So it is clear that he did not violate any Roman laws. But a question remains: Would he have? It seems so, given what we know of the early disciples. They were clear about how their utter allegiance to Christ could mean violating human law at times. Consider two examples as found in the book of Acts.

Acts 4:18-20 Then they called them in again and commanded them not to speak or teach at all in the name of Jesus. But Peter and John replied, “Which is right in God’s eyes: to listen to you, or to him? You be the judges! As for us, we cannot help speaking about what we have seen and heard.”

Acts 5:27-29 The apostles were brought in and made to appear before the Sanhedrin to be questioned by the high priest. “We gave you strict orders not to teach in this name,” he said. “Yet you have filled Jerusalem with your teaching and are determined to make us guilty of this man’s blood.” Peter and the other apostles replied: “We must obey God rather than human beings!”

Sure, generally speaking, we should obey the laws of the state that we find ourselves in. Romans 13:1-7 and 1 Peter 2:13-17 for example spell this out. But as I have also written, the state is not absolute, and we are not to offer blind subservience to the state. See for example this piece: billmuehlenberg.com/2020/05/15/the-state-is-not-absolute/

And there can indeed be a place for violating human laws. There is a place for Christians to engage in civil disobedience. See this article for more details on this: www.billmuehlenberg.com/2008/11/02/christians-and-civil-disobedience/

So we get back to our original question. Would Jesus violate the law? Again, it is in one sense hypothetical. We do know from what I just shared above that he does not seem to have violated either Jewish or Roman law while on the earth.

But would he have resisted evil laws of say a Hitler or a Stalin? Would he have violated laws that are clearly wrong, such as pro-abortion laws? Would he have disobeyed laws that go directly against his own teachings? I think the answer to these three questions would be ‘yes’.

But in saying all this we still must be careful and cautious. Jesus was not some political revolutionary seeking to overthrow the state. Neither should we be. But there may well be times when we have to say ‘no’ to the state in order to say ‘yes’ to God.

5 Replies to “Would Jesus Violate the Law?”