The militants seeking to destroy Lyle Shelton are coming after all of us:

One hates to do it, and one hates to sound like a broken record, but really, I told you so! Indeed, a number of us tried to tell you. Many of us warned and sounded the alarm and pleaded and did all we could to wake folks up before it was too late.

I refer of course to the unrelenting homosexual juggernaut which seeks to crush everything in its path. I and others warned that granting special rights to homosexuals, including recklessly redefining marriage, would be the slippery slope to a tyrannical future in which freedom of speech, freedom of religion, and freedom of conscience would all be under threat. 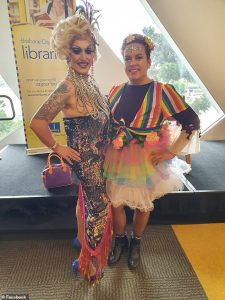 It would open a Pandora’s Box that would likely never be shut. I certainly made these warnings dozens, if not hundreds of times over the past few decades. I said everything would change if we went down that path. Nothing would stay the same, and conservatives and Christians would especially be in the crosshairs.

Of course everything that I have warned about has been happening – and then some. I have documented countless cases of those who refused to bow the knee at the altar of the sexual militants paying a heavy price, with legal actions of all sorts taking place.

How many people have now lost their jobs, been heavily fined, or even thrown into prison for daring to stand true to their convictions and not cower before the radicals? Sadly, far too many of these folks I happen to know personally. This is not make-believe – this is very real indeed.

Consider just one more shocking example of this. In today’s press (eg. The Herald Sun, Courier Mail, etc) there is a story of how two drag queens are each suing former ACL head Lyle Shelton for $20,000 and demanding a public apology. His crime? Daring to suggest that their ‘performance’ in a Queensland public library was not appropriate for little children.

Of course this story is not new. Those in the know have been following this for some time now. Consider this piece from August from a homosexual site. It begins:

Two drag performers have taken an Australian Conservatives political activist to the Queensland Human Rights Commission under the Anti-Discrimination Act over a blog he wrote about why “drag queens are not for kids.” Lyle Shelton, formerly head of the Australian Christian Lobby, appeared before the Queensland Human Rights Commission (QHRC)  on Thursday for the compulsory conciliation proceedings.

According to the QHRC, “conciliation is a private and informal opportunity for all parties to discuss what occurred, listen to each other’s views and come to an agreement about how the complaint can be resolved.” The proceedings look for a way to resolve the issue through conciliation in the hopes of avoiding time and money spent pursuing the case before a tribunal.

The ways one could resolve a complaint, the QHRC said, are to apologise, change the organisation’s policies, organise training in the workplace or pay compensation for the hurt feelings. In this case, the Thursday hearing did not lead to a conciliation.

“The complaint did not resolve and I now have an anxious wait to see if I am to be taken to the Queensland Civil And Administrative Tribunal (QCAT) for the matter to be heard before a judge,” Shelton posted on his website. Shelton calls himself a “long-time campaigner against gender queer ideology” and “leader of the campaign to preserve the definition of marriage during the 2017 same-sex marriage plebiscite.”

The complainants, Queeny and Diamond Good-rim, now have 28 days time to decide if they want to take their case of discrimination before the QCAT for a public hearing. In an email to his supporters, Shelton, who has tried to frame the issue as one dealing with “free speech”, claimed that the legal proceedings before the QCAT could cost him between $60,000-$100,000. www.starobserver.com.au/news/drag-queens-take-politician-to-human-rights-commission/197181

Lyle of course has been writing about this as well, including in a new piece just posted today. He says in part:

The freedom of every Australian in on trial. The Sunday Mail today revealed what the two drag queens suing me want. In short, $20,000 and an apology. However, the paper didn’t report everything, I get that space is limited. But critical to the story is their key legal demand: that I be gagged. Forever. (See Orders sought, 18 (c) on page 5.)

Their legal action, supported by the taxpayer-funded LGBT Legal Service, is a warning shot to every concerned parent in Australia. Don’t criticise Drag Queen Story Time. Or else. I will not be granting their demands. For to do so would surrender the freedom of speech of all Australians.

At stake is the freedom of parents to critique and debate the demands for influence on their children coming from an aggressive rainbow political movement. I have done nothing wrong. You and I should be allowed to think and speak about the issues that arise from placing LGBTIQA+ gender-fluid and adult entertainer role models in front of children in public libraries.

He closes his piece this way:

One more thing. Those of us who fought the LGBTIQA+ political movement’s crusade to de-gender marriage warned that the indoctrination of children would be next. The same-sex marriage Yes campaign, which now spends its time supporting legal action against Christian schools, flat out denied there would be any consequences for freedom of speech and for parent’s rights not to have their children taught radical LGBTIQA+ concepts.

Defending their promotion of Drag Queens Story Time, the Newcastle City Council said it was the result of same-sex marriage. Queensland’s former Education Minister Grace Grace said the same about why parents now had to accept their children being taught gender fluid indoctrination at school. Australians were lied to in the 2017 same-sex marriage debate. Freedom of speech and the well-being of children is now at stake. Big time. www.lyleshelton.com.au/revealed_what_the_drag_queens_want

I have been warning about how our children are being directly targeted by the activists – including via the drag queen story times – for years now. It really is frightening what is happening. See this earlier piece of mine for example: billmuehlenberg.com/2018/07/23/libraries-and-drag-queens-activists-targeting-our-children/

And all this will get ten times worse if Dictator Dan’s new bill in Victoria goes through: billmuehlenberg.com/2020/11/28/you-are-forbidden-from-getting-help/

As I said, I know many people who are going through or have gone through the same attacks by the rainbow warriors. Some have had to endure this persecution and anti-Christian bigotry for years. Some have lost their jobs and are struggling to feed their families. Some have been slapped with massive fines. Some have had to mortgage their own homes just to cover all the legal costs.

This is pink fascism in action. And it will not stop any time soon. Indeed, it will simply get worse. The more wins the activists get, the more emboldened they are to go after others. This will NOT stop until all opposition, all resistance and all criticism is finally silenced.

Their endgame has always been about the total muzzling of any and all opponents to their agenda. They will never be content until every last individual, organisation and church is forever shut down or banned from speaking out. That is always what they have been aiming for.

Wakey, wakey folks. Full-blown persecution is now upon us. And it will keep on going, and get even worse. You might be next. All the more reason to keep working, to keep fighting, and to keep praying against this sexual behemoth which is targeting us all.

As to Lyle and his case, you know what to do: Pray for him. Tell others about his plight. Share the word far and wide. And be prepared to open your wallets and give him and his family some much-needed financial help to pay off the hefty legal bills and other costs, including – heaven forbid – the draconian fines he may have to dish up.

30 Replies to “You WILL Be Silenced!”