Some useful helps as you read the book of Ezekiel:

The book of Ezekiel is a key prophetic book in the Old Testament, but it may not get as much attention as it deserves. Indeed, many Christians tend to shy away from the book, and that for various reasons. Some folks simply stay away from the OT. Some find this book to be rather mysterious and hard to get a handle on. As Iain Duguid says in the introduction to his commentary:

If you were to ask your Christian friend to name their favorite book of the Bible, the book of Ezekiel would not spring to most people’s minds. There are exceptions, of course. . . . The book of Ezekiel is certainly a difficult book to understand. That is hardly a new observation. The church father Jerome remarked:

“As for Isaiah, Jeremiah, Ezekiel and Daniel, who can fully understand or adequately explain them? . . . The beginning and ending of Ezekiel, the third of the four, are involved in so great obscurity that like the commencement of Genesis they are not studied by the Hebrews until they are thirty years old.” 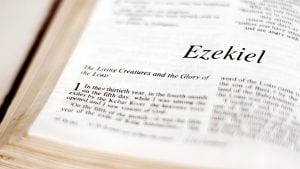 And then there is the prophet himself. He seems, well, so very strange. As Mark Dever puts it:

Perhaps what makes Ezekiel appear so strange are the bizarre things the Lord called him to do in order to communicate with his people. Quite simply, he called Ezekiel to communicate weird and fantastic visions by performing strange and symbolic actions. During the first period of Ezekiel’s ministry (593–586 B.C.), God called him to be a virtual recluse, afflicted with periodic fits, paralysis, and dumbness. For example, we observe episodes of aphasia, where Ezekiel lies motionless on his side for months, even years (4:4ff.). He is bound up in his house with ropes so that he cannot go out among the people (3:25). His tongue is glued to the roof of his mouth so that he cannot speak (3:26). He is ordered not to mourn the death of his wife (24:16-17)….

Ezekiel writes at the time of the exile. He was among the earliest waves of exiles deported to Babylon in 586/7 B. C. Some others still remained in the land for a bit longer, even with their own king – Zedekiah in Jerusalem. So Ezekiel ministered to both groups while he was in exile. 2 Kings 23-25 and 2 Chronicles 36 provide some of the historical background to this period.

In his book Roots: Let the Old Testament Speak, Alec Motyer offers us some more detail in terms of historical setting:

In the presentation of his message Ezekiel is the chronologist among the major prophets. Leaving aside for a moment the oracles addressed to the nations (chs. 25-32), the remainder of Ezekiel’s book records his messages in time-order. His ministry began in 593 BC (1:1) among the exiles taken to Babylon in Jehoiachin’s captivity (2 Kings 24:8-16), and continued on to the vision recorded in 573 BC (40:1).

J. Gordon McConville presents us with this simplified outline of the book:

1-7 the prophet and the coming fate of Jerusalem
8-11 a vision of Jerusalem’s sin
12-15 Ezekiel, elders, prophets
16-24 allegories and parables
25-32 oracles against nations
33-39 Jerusalem falls; oracles of salvation!
40-48 vision of a renewed city, temple, and land

Many features of the book could be mentioned here, but let me just focus on three of them. One is the way in which sin is so forcefully called out by the prophet. Perhaps no other book is so rich and varied in the ways evil is denounced and sin is rebuked. I like how Christopher Wright puts it:

The Old Testament has a rich vocabulary of sin. All the prophets found ways to characterize and expose its nature and effects. None of them, however, surpassed Ezekiel in the depth and the extent of his portrayal of sin in all its horror. . . .

Ezekiel spares no sensitivities in his use of metaphor and allegory. Sin is an abomination, it is detestable. Sin offends God, it stinks, it is grotesque, gruesome and disgusting. It perverts and pollutes. And in the end it provokes Yahweh, ‘the compassionate and gracious God,’ beyond all patience or pity.

Some of the most hardcore language and imagery is found in two shocking chapters: Ez. 16 and 23. The graphic pictures and imagery is among the strongest in the entire Old Testament. For example, ch. 16 is a very strong passage using very powerful wording to describe the wretched condition Israel had fallen to. Quite startling images of harlotry and unfaithfulness are used.

As Leslie Allen comments, the “language is deliberately repulsive and coarse”. Indeed, Douglas Stuart reminds us that its graphic and explicit descriptions, along with ch. 23, made Ezekiel among the last books studied by mature Jewish rabbinic students.

Daniel Block concurs, saying, “No one presses the margins of literary propriety as severely as Ezekiel”. He continues: “but the semipornographic style is a deliberate rhetorical device designed to produce a strong emotional response.” He even has a four-page excursus on this chapter entitled, “The Offense of Ezekiel’s Gospel”.

Chapter 23 is just as bad. As Wright reminds us:

Second only, perhaps, to the genealogies in 1 Chronicles, the lurid allegories of Ezekiel 16 and 23 must qualify as the chapters in the Bible least likely to be read aloud in church – and just as likely to be preached from. They are long, they are lewd, and their language in places is, frankly, pornographic. They evoke images of the most vulgar sexual depravity and the most horrendous graphic violence. They are, in short, shocking.

He goes on to note that most English translations “have to tone down the offensive coarseness of some of the original expressions”. However, all “this is not a matter of gratuitous bad taste, or evidence of some sick perversion … These are deliberate shock tactics on a scale probably unsurpassed in the whole arsenal of prophetic assault and battery weapons.”

As he rightly says, “Ezekiel’s capacity to shock knows no limits”. But it is all about speaking what God had told him to speak. It is about revealing the heart of God here: a heart sickened by the wretchedness of sin, immorality and idolatry of his own people. Would that we today had such a high view of God’s holiness and shared his utter hatred of all sin.

A related theme found in this book is the role of the watchman. In Ex. 3:16-21 and 33:1-9 we read about the heavy responsibilities of the watchman or sentinel. It tended to be a job no one wanted, and a ministry no one appreciated. Ezekiel is called to be a watchman and warn the people of their sins.

Ezekiel must discharge his duty to warn the people, otherwise he will have blood on his hands. He is under divine obligation to sound the alarm, warn God’s people of impending judgment, and plead with them to repent. Whatever way the people respond, once the prophet has fulfilled his divine calling his hands are clean.

Some might regard the two accounts as being quite similar, but there are some differences. As Iain Duguid comments, “In chapter 3, the image functioned as part of a private message to the prophet, pressing on him the importance of taking his task seriously. In chapter 33, it is part of a public proclamation (33:2, 7), pressing in on the people their own responsibility for their fate and the real possibility, even now, of repentance and return.”

And he reminds us of the present-day application:

The seriousness of the message must never be obscured by the desire to make the medium more attractive. The preacher’s task is not to entertain or inform but to plead passionately with men and women to flee the wrath that is to come on account of sin. The preacher is commissioned to call clearly for repentance and turning to Christ, to be a watchman rather than an entertainer. But preachers must not only preach the law to confront the hypocrite, they must also preach the gospel to woo the lost sheep.

I offer more on the need to be modern-day watchmen here: billmuehlenberg.com/2016/07/25/speak-even-no-one-wants-listen/

A third theme found in this book is the majesty of God. John Taylor puts it this way:

Once Ezekiel had experienced his vision of the merkabah, the chariot-throne of Yahweh, confirming to him that the God of Jerusalem was alive and triumphant even in this heathen, polytheistic land of Babylon, it is not surprising to find that his recurring theme is the majesty of the Lord and his reiterated message is that the house of Israel, the exiles, the nations of the world, even the forces of darkness, should all ‘know that I am the Lord’. To judge from the frequency of its use (over fifty times in all), this aim was Ezekiel’s consuming passion.