Do you have blood on your hands?

No, I am not talking about an accident in the kitchen with a sharp knife. The phrase under question of course has to do with being responsible for someone’s death in particular, or being guilty of something in general. Increasingly of late when I speak, I not only use the phrase, but I will hold up my hands and tell the audience: ‘See, there is no blood on my hands.’ I did this just last week with a group of young students I was teaching. 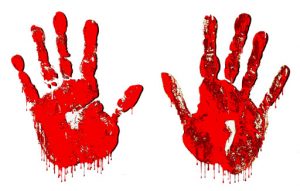 So what is all this about? This metaphor goes right back to the Bible where we find it being used in various places. In the New Testament for example we have this figure of speech famously used by Pilate. As we read in Matthew 27:24-26:

So when Pilate saw that he was gaining nothing, but rather that a riot was beginning, he took water and washed his hands before the crowd, saying, “I am innocent of this man’s blood; see to it yourselves.” And all the people answered, “His blood be on us and on our children!” Then he released for them Barabbas, and having scourged Jesus, delivered him to be crucified.

We see this being used elsewhere in Scripture. In Isaiah 59:3 for example it says this: “For your hands are defiled with blood and your fingers with iniquity; your lips have spoken lies; your tongue mutters wickedness.” Again, this is a figure of speech being used to refer to a very serious matter.

But here I have two passages from Ezekiel in mind. Both have to do with the watchman on the wall, as found in chapters 3 and 33. It may be that this memorable passage is run with twice because the first instance has to do with Ezekiel’s private calling, while the second has to do with his public calling.

Be that as it may, both passages give a very strong word to the prophet that he must warn the people, and if he does not, he will have blood on his hands. But if he does sound the alarm, he is no longer responsible, and the responsibility lies with the listeners as to whether they will heed his words or not.

In Ezekiel 3:16-27 we find the first variation of this calling to be a watchman:

And the hand of the Lord was upon me there. And he said to me, “Arise, go out into the valley, and there I will speak with you.” So I arose and went out into the valley, and behold, the glory of the Lord stood there, like the glory that I had seen by the Chebar canal, and I fell on my face. But the Spirit entered into me and set me on my feet, and he spoke with me and said to me, “Go, shut yourself within your house. And you, O son of man, behold, cords will be placed upon you, and you shall be bound with them, so that you cannot go out among the people. And I will make your tongue cling to the roof of your mouth, so that you shall be mute and unable to reprove them, for they are a rebellious house. But when I speak with you, I will open your mouth, and you shall say to them, ‘Thus says the Lord God.’ He who will hear, let him hear; and he who will refuse to hear, let him refuse, for they are a rebellious house.”

The word of the Lord came to me: “Son of man, speak to your people and say to them, If I bring the sword upon a land, and the people of the land take a man from among them, and make him their watchman, and if he sees the sword coming upon the land and blows the trumpet and warns the people, then if anyone who hears the sound of the trumpet does not take warning, and the sword comes and takes him away, his blood shall be upon his own head. He heard the sound of the trumpet and did not take warning; his blood shall be upon himself. But if he had taken warning, he would have saved his life. But if the watchman sees the sword coming and does not blow the trumpet, so that the people are not warned, and the sword comes and takes any one of them, that person is taken away in his iniquity, but his blood I will require at the watchman’s hand.

I have often written about these two passages. See here for example: billmuehlenberg.com/2008/09/28/on-the-need-for-watchmen/

In my own Christian ministry, I have a watchman on the wall sort of calling. I routinely am speaking to God’s people, seeking to sound the alarm about what is happening in church and state. I seek to warn folks about some of the issues that will very much impact on their Christian faith and practice. Often it involves what is happening in the culture wars.

I have been doing this now for over 30 years in Australia. I do not do it because I enjoy doing it. I do not do it in order to win some popularity contest. Just the opposite: it seems most Christians do NOT like it when I share such things, and they prefer not to listen to such warnings. Too many just want their ‘best life now,’ and they do not want anything ‘negative’ or controversial to interrupt their lives.

While I am not a prophet nor the son of a prophet, I am quite aware that all the biblical prophets experienced the same thing. They were rejected by the masses, hated on, and bitterly criticised. Some were imprisoned or even killed. And many were told even before they began their lengthy ministries that the people would not listen to them. Imagine that!

For example, Jeremiah was told by Yahweh at the very outset that the people would not pay any attention to him, yet he faithfully proclaimed God’s message for some 40 years. Based on that, I still have another decade to go! But I can relate to what they went through.

Most Christians are just not interested in these sorts of ministries, and they really do not want such watchmen around. Indeed, it is interesting to see how often I will get invited back to a church after I first go there and share what the Lord has placed on my heart.

I am always reminded of the words of the great prophetic voice of last century, A. W. Tozer. He said this about the ministry God had entrusted him with: “I have preached myself off of every Bible Conference platform in the country!” Although humorous, it is a sad reality.

I must always share what God is calling me to share – regardless of the reception. That will mean I will likely forever be on the outer. I will not be popular. I will not be invited to the mega-churches. I will not be liked in most church circles. Indeed, I will be roundly rebuked, criticised and made fun of.

That happens all the time. As I keep telling folks, I would much rather sit at home and live a quiet and peaceful life. You know, sit around reading books with a cat on my lap and a coffee in my hand. I could easily choose to do that – but if I did, I would be telling God to get lost, and I would have blood on my hands.

The phrase “No Lord” is of course a contradiction in terms. Either we say yes to what he calls us to do, or he is NOT our Lord. And if he is not our Lord, he is not our Saviour. It is that simple. As Elisabeth Elliot once put it: “To pray ‘thy will be done’, I must be willing, if the answer requires it, that my will be undone.”

So I shall keep on doing what I have been called to do. I really do not want any blood on my hands!

I am continuously surprised at how many folks – including far too many Christians – have no idea how rhetoric works in the Bible. Literary devices like hyperbole and so on are used all the time, and prophetic voices – ancient or modern – use such rhetorical devices routinely.

Yet some folks will completely misunderstand this and criticise the one using such language. For example, the other day I shared some terrific quotes about just how bad the public schools are and how sending our Christian kids to Sunday School will hardly offset the secular humanism they are being force-fed every day in our school system.

But this is exactly how rhetorical language works, and it is how prophetic voices make strong black and white declarations. It get’s the attention of folks and makes a powerful statement. Indeed, if something like this was said instead, no one would pay any attention: ‘Well, you know I think that some schools maybe now and then are perhaps not always too good in proper education, and sometimes they just might be pushing agendas that are not always the best…’

Compare that namby-pamby milquetoast utterance with the actual quote from Paul Washer that bothered a few folks: “Your children will go to public school … and they will be trained for somewhere around 15,000 hours in ungodly secular thought. And then they’ll go to Sunday school and they’ll color a picture of Noah’s ark. And you think that’s going to stand against the lies that they are being told?”

I think you will agree that his way of saying the same thing packs a whole lot more punch than the limp-wristed way that I put it. Sure, there is of course a time and a place for nuance and the like, but not usually when prophetic voices are seeking to stir the listener, move them from their lethargy and apathy, and make a strong, forceful point of biblical truth.

These critics need to get up to speed on how language – including biblical language – works. See this article for more detail on this: billmuehlenberg.com/2014/02/15/on-biblical-rhetoric-and-prophetic-speech/

And see these pieces as well: billmuehlenberg.com/2019/07/20/hermeneutics-and-figurative-language-part-two/

In sum, I will keep acting as a watchman on the wall, and I will keep using the sort of biblical rhetoric that God’s prophets have used. And I will keep striving to have hands that are blood-free.