I am not much of a fan of pop culture, pop music, or pop celebrities. The whole scene is one big turn off to me – indeed, it is mostly so boring and banal. But unless one is a complete hermit, one cannot help being exposed to some of the goings-on in popular culture.

While I did not watch it – nor have any desire to do so – I am informed that a big cheese pop culture event just occurred: the Grammys. And as to be expected, it sounds like it was a dreadful affair. It had everything most sensible people would want to avoid like the plague, including yet more zombie-like promotion of homosexual marriage. Whatever that has to do with music is beyond me.

But one performance seems to have especially resulted in a lot of attention. It seems ol’ Katy Perry is at it again. I have written before about how this American pop star has ditched her Christian faith big time: billmuehlenberg.com/…/perry-pop-and-priorities/ 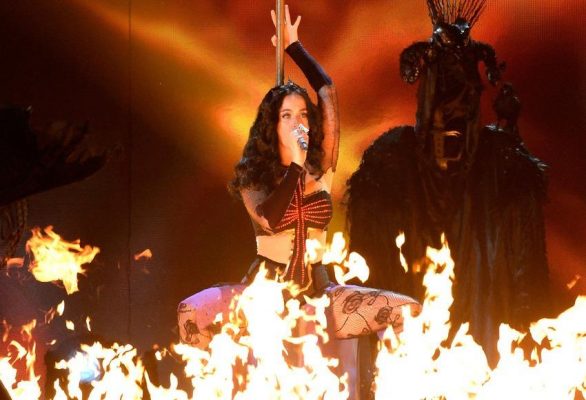 But her full-on display of the demonic and the occult has got plenty of people talking. Let me simply run with part of one write-up here about all this: “Popular Christian gospel singer Natalie Grant walked out of the Grammys after witnessing a series of performances that even the mainstream entertainment media admitted were occult in nature.

“Grant, who was nominated for two Grammys last night, tweeted her excitement upon arriving at the event but soon made it clear that she left early because what she witnessed conflicted with her Christian beliefs, stating, ‘We left the Grammy’s early. I’ve many thoughts, most of which are probably better left inside my head. But I’ll say this: I’ve never been more honored to sing about Jesus and for Jesus. And I’ve never been more sure of the path I’ve chosen.’

“Although she remained coy on the exact circumstances, Grant was probably referring to Katy Perry, who was surrounded by demons as she danced around an upside down broomstick before being encircled by fire during a performance of her song ‘Dark Horse’. Perry wore clothing bearing an illuminated Knights Templar cross. Even E! Online tweeted that Perry’s performance resembled ‘actual witchcraft’. Christian music website BreatheCast complained that Perry’s performance was ‘filled with satanic imagery and witchcraft.’

“Viewers also expressed their shock at the occult overtones of the show. However, Grant could also have been offended by the mass gay wedding ceremony which took place during a performance by Macklemore & Ryan Lewis. Not to be outdone, Beyonce and Jay-Z attempted to up the ante by performing a risqué duet which provoked fury from parents who complained that the spectacle was too explicit for children.”

Now it goes without saying that pop stars and other celebs regularly seek to push the boundaries and try to out-shock one another. It is all part of generating publicity and attention. So they go for the most shocking, the most controversial, and the most sleazy -that seems to be the order of the day for so many of these “entertainers”.

Thus they may not at all be full-blown Satanists and witches or whatever. But that really does not matter. These folks do not seem to realise that one cannot mess around with this stuff without being impacted. Even if it is all for show, there really are powers of darkness out there, and when we mess around with demonic and occultic stuff, we will not walk away from it unscathed.

The world as we know it is not all there is. There is an invisible realm of good and evil, of God and Satan. The Bible everywhere attests to the reality of the supernatural, and of spiritual forces both good and evil. And all of us are impacted by the spiritual war going on around us. All of us are on one side or the other.

Indeed, the truth is, there can be no neutrality here: we are either sold out to Jesus Christ or we are sold out to the devil. People might foolishly think that if they reject Christ they are just being neutral and unaligned. But they are sadly mistaken. When we shake our fist at the living God we are in fact making a formal alliance with the enemy.

Jesus made this quite clear when he said, “He who is not with me is against me” (Matthew 12:30). Or as he said in Matthew 6:24, “No one can serve two masters. Either he will hate the one and love the other, or he will be devoted to the one and despise the other.”

This idea of choosing one or the other – with no fence-sitting – is found elsewhere in Scripture. Consider just a few Old Testament texts:

“But if serving the LORD seems undesirable to you, then choose for yourselves this day whom you will serve, whether the gods your forefathers served beyond the River, or the gods of the Amorites, in whose land you are living. But as for me and my household, we will serve the LORD.” (Joshua 24:15)

There is no neutral ground here. Either Christ gets our full allegiance and devotion, or Satan gets it. Perry has sadly chosen the latter it seems. As I have said before, we need to pray for her – and others like her. She may think she is being oh so cool and hip and trendy.

But there is nothing cool at all in messing around with demons and Satan. It is bad enough when anyone gets involved in the world of the occult and the diabolic. It is even worse yet when someone renounces her Christianity to do so. In the light of all this, this very serious warning from Jesus certainly springs to mind here:

“When an unclean spirit goes out of a man, he goes through dry places, seeking rest, and finds none. Then he says, ‘I will return to my house from which I came.’ And when he comes, he finds it empty, swept, and put in order. Then he goes and takes with him seven other spirits more wicked than himself, and they enter and dwell there; and the last state of that man is worse than the first. So shall it also be with this wicked generation.” (Matthew 12:43-45)