One question almost too difficult to answer concerning the state of so much of the West today is this: which is worse, our mental meltdown or our moral meltdown? Chances are they are both equally abysmal. We live in a moral sewer nowadays, and our minds seem to be completely emptied out as well.

We can no longer think straight, and our morality abilities have all but disappeared. The grinding mill of political correctness and political radicalism are ensuring that the ability to think and make clear moral assessments have all but withered on the vine.

For all of our progress, growth, learning, and advances in technology, we may be the dumbest and morally numbest culture on earth. We are producing mental midgets and moral misfits, and the hopes of turning all this around seem to be fading every day. 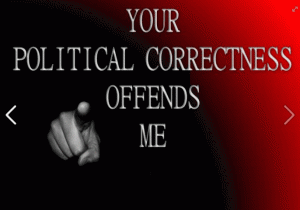 The examples of this are of course legion, and not a day goes by when we find more proof of this. My website cannot even begin to keep up with all this, try as I might. But I can report at least some scenes from this moral and mental meltdown.

Take as an example a seemingly inconsequential news item. It had to do with the latest evictee from a popular food show, Masterchef Australia. In this cooking competition one or more folks each week are eliminated, and eventually the last man or woman standing will be given their reward.

So a recent article about the latest contestant to lose out made the headlines. Again, what’s the big deal in all this? Well, it should not have been a big deal, until I actually read it a bit more closely. And what I found still has me shaking my head.

Consider this caption beneath a pic in the article: “Former Masterchef contestant Sam Gant and wife Celeste prepare for their new venture at South Melbourne Market.” Now for those not in the know, Sam happens to be a woman, a female. So run that by me again! Her wife? And said with a straight face? Puh-leese!

The article refers to her throughout as “Ms Gant”. So what then, pray tell, is her other? And what is Sam? The husband? Another wife? An it? When we totally massacre the institution of marriage, we end up in these idiotic situations. If we can call her partner a wife, we might as well also call her a rock, or a kumquat, or a farglesuvjf.

We are just making things up as we go along We are just inventing words, and taking older established words, gutting them of their meaning, and adding instead anything we want. This is sheer madness. And even more frustrating is the fact that any media outlet would even succumb to this moonbattery.

How could any journalist or subeditor actually stoop to such insanity as to actually write something like this with a straight face? Just how lobotomised are those in the media today that they simply parrot any PC nonsense as if it were gospel truth.

The mental and moral vacuum found in the lamestream media today is absolutely staggering. A few short years ago to write such foolishness would have meant you would be laughed out of court. Today hardly anyone bats an eye. That just demonstrates how successful the stranglehold of political correctness and the homosexual juggernaut has become.

These guys can do and say anything they like with complete impunity. Well, I don’t care if I am the last man standing, but I will keep calling out these social engineers. They are not just destroying our culture, but they are destroying our language as well.

The most important principle we can get out of this is to understand this truth: social engineering is always preceded by verbal engineering. Write that one down if you must. Commit it to memory. When the activists want to completely destroy a social or cultural institution, they know that the best and easiest way to accomplish this is to first assault the language.

By use of euphemisms, half-truths, deception, and by simply making language up as you go along, their job of smashing society becomes so much easier. And the militant homosexualists along with their PC buddies in the mainstream media have perfected all this. So now we can talk about a woman and her wife as if we are talking about 2+2 and what that equals.

The collusion of the media with the militants is a very worrying thing indeed. We expect the activists to lie, cheat, and do whatever it takes to accomplish their goals and secure their revolution. But when brainless and immoral journalists do their every bidding, then that is a real concern.

All this is why the alternative media has sprung up. We are sick and tired of the mental and moral midgets in the MSM siding with those who want to destroy society and establish their bent and twisted agenda. The truth is, these things matter, and they are worth fighting about.

I will keep doing this. Will you?