OK, now you may think I have gone off the deep end: speaking on things that mere mortals must tread so very carefully on. No, I have not gone into a last days’ madness mode, and no, I do not claim to know much of anything very definite about this most mysterious of books: Revelation.

Anyone who knows me realises that while in my younger days as a believer I was very keen indeed on all things eschatological, in my more mature years I have eased up a bit, having realised that there is plenty of room to move in interpreting and understanding these matters, and that we need to be cautious, humble and a bit less dogmatic here.

So I am certainly not offering any sure word about the last days and the Lord’s return. I am just throwing up a few rather generic and guarded thoughts about a few matters. As to Babylon, or specifically, Mystery Babylon, as found in Revelation 17-18, the text, as hard to fully understand as it is, does offer some general clues as to what is being referred to. 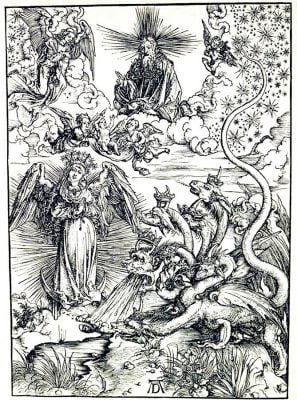 Babylon has had a long history in human affairs as well as in Scripture. We can go back to Nimrod and Babel in Genesis 10-11, through to the time of the Babylonian captivity, and right up until the end of the book of Revelation. But often Babylon is used in a more symbolic fashion in Scripture. It represents wider and bigger realities.

Indeed, what we have here is a tale of two cities. Augustine of course ran with that theme in his famous, The City of God. But the Bible in general and Revelation in particular make it clear that there is the heavenly city competing with the earthly city. As Tom Wright notes in his discussion of Rev. 18:

We shall see John’s own vision of this ideal city at the end of the book. But for the moment we are shown its opposite: the city which tried, like Babel of old, to make itself The Place, the summit of human achievement, by its own efforts and to its own glory – and which ends up shrinking to a shell, with the wild desert creeping back into its palaces, its temples, its fine streets and shops and courtyards. Creation will reclaim what arrogant humans had thought to construct. Babylon will become a place for demons, for unclean spirits, for birds and monsters of all the wrong kinds.

In both the Old and New Testaments both Babylon and Jerusalem take on more than life-size dimensions and become symbols of two entirely different relationships to God and ways of life. Babylon stands for earthly relationships and an earthly way of life. Jerusalem stands for spiritual realities, and God is its life. This was true of the earthly Jerusalem only at its best and in part. But it becomes so in full measure when the new Jerusalem rises on the ruins of the old.

William Dumbrell comments on the makeup of Babylon:

In a world controlled by divine order, it is inevitable that – given the pernicious nature of her influence through wealth and sensuality (18:3) – Babylon must fall. Babylon’s idolatrous and seductive social, economic, and moral actions will bring about her fall. Babylon’s blatant paganism will bring about her fall. And the leaders and peoples of Babylon’s world will fall with her. Indeed, all the Babylons throughout history must fall (cf. Isaiah 21:9). It is remarkable that divine patience permits the Babylons of history to endure until they collapse under the weight of their own excesses.

The fall of Babylon precedes the climax of history. David Pawson writes:

So sure is Babylon’s downfall that it is pictured in Revelation as already having happened. Christians can be absolutely certain of this. But there are practical reasons why they are being told about it. What is the relation between God’s people and this last ‘Babylon’? Three guidelines are given:
First, there will be many martyrs in the city….
Second, the Christians are told to ‘come out of her, my people, so that you will not share in her sins’….
Third, when Babylon falls, a celebration is commanded….
The prostitute disappears and the bride appears. The ‘wedding supper of the Lamb’ is about to take place.

The Mark of the Beast

However exactly we are to understand Babylon (mentioned six times in Revelation), it is clear, especially from Rev. 18:9-20, that it certainly involves economic, commercial and financial aspects. As v. 11 states, “The merchants of the earth will weep and mourn over her because no one buys their cargoes anymore.”

Let me briefly discuss this aspect of Babylon which seems to be playing itself out today. In Revelation we read about several beasts, and we also are told about the ‘mark of the beast’. Now, do I know exactly what the mark of the beast is, or will be? No, and neither does anyone else with absolute certainty.

This too is a mysterious concept, bathed in apocalyptic language and symbolism. Although entire books have been penned on this, I for one am not going to say this is it or that is it. But we do have a few clues provided for us here. The thirteenth chapter of Revelation is all about these beasts, and in verses 16-18 we read this about the second beast:

It also forced all people, great and small, rich and poor, free and slave, to receive a mark on their right hands or on their foreheads, so that they could not buy or sell unless they had the mark, which is the name of the beast or the number of its name. This calls for wisdom. Let the person who has insight calculate the number of the beast, for it is the number of a man. That number is 666.

Once again, what exactly the number 666 means and refers to we simply do not know with certainty, nor do we know exactly what this stuff about buying and selling is all about. However I wish here just to mention something which may be part of the whole package. And I realise I might be way off the mark here (no pun intended).

But as anti-Christian bigotry and persecution in the West heats up, one could almost imagine how all this might come about. Two main sources of hostility to Christianity can readily be identified: the radical homosexual lobby, and creeping sharia.

Between these two groups alone we are seeing more and more attacks on Christians, and this clearly involves the financial and commercial realms. For example, halal products are all over the place, and those believers who do not want to support political Islam are finding it increasingly difficult to find places where they can buy non-halal products.

It is the same with hundreds of companies, businesses, banks and corporations all fully promoting the homosexual agenda. Believers are rightly boycotting or avoiding such businesses. But as more and more groups jump on this bandwagon, there are getting to be fewer places for Christian consumers to turn to.

As I often say to those believers rightly concerned about all this, to be fully disassociated from such politicised and immoral businesses and services, we may have no choice but to live in a cave somewhere! It is getting that bad, but such complete isolation and separation may not be the answer.

Now in both cases much of this restriction in buying and selling – at least for now – is being done voluntarily by those who resist these two nefarious agendas. But one can see how this will continue to get worse, and we can certainly see already how more and more institutions, corporations and government bodies are forcing people to comply with the homosexual agenda and the spread of Islam.

Many people are losing their jobs or being fined or even jailed for refusing to go along with these agendas. Obviously all three types of penalties and punishments will greatly impact our buying and selling abilities. So I often wonder if part of the mark of the beast might be tied up with where the West is now headed in this respect.

Again, I certainly am not saying this is what those mysterious portions of Revelation refer to. But I can see how it might fit in somewhere along the line. As ungodliness and unrighteousness increase and abound, and as enmity towards Christians steadily grows in the West, we can see how the political and social and legal and financial systems of the world are so powerfully turning against the people of God.

So I am only speculating here – this is not gospel. But certainly one wonders as more and more of the corporate and commercial world turns hostile to believers, whether this might be part of it. But whatever the mark of the beast refers to, the good news of Rev. 18 and of the entire book is that God wins.

In the end, Babylon will most certainly fall and God’s complete reign and rule will run unhindered and unopposed. That is why William Hendriksen entitled his commentary on Revelation, More Than Conquerors. Jesus, and those who are with him, indeed conquer and triumph.

As he writes, “In short, the theme of this book is stated most gloriously and completely in these words: ‘These shall war against the Lamb, and the Lamb shall conquer them, for he is Lord of lords, and King of kings; and they also shall conquer that are with him called and chosen and faithful’ (17:14).”

16 Replies to “Babylon, Its Fall, and the Mark of the Beast”