The need of the hour is revival. All believers should be praying for heaven-sent, life-changing revival. Without it the West looks to be all but finished. While whole libraries have been filled with books on revival, let me look at one case of biblical revival, and the basis of it.

You would be familiar with the story. Josiah came to the throne at eight years of age and ruled for 31 years. During the eighteenth year of his reign (622 BC) the Book of the Law (most likely Deuteronomy) was found while temple repairs are being carried out.

While he had been involved in various reforms before this, real revival breaks out after the Word of God is found. The enormity of the predicament Judah is in and the need for change becomes clear to Josiah as he reads the book. We read about his response in 2 Chr. 34: 29-33: 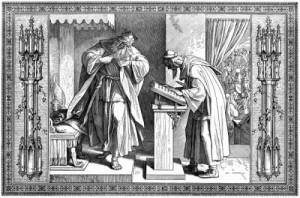 Then the king called together all the elders of Judah and Jerusalem. He went up to the temple of the Lord with the people of Judah, the inhabitants of Jerusalem, the priests and the Levites – all the people from the least to the greatest. He read in their hearing all the words of the Book of the Covenant, which had been found in the temple of the Lord. The king stood by his pillar and renewed the covenant in the presence of the Lord – to follow the Lord and keep his commands, statutes and decrees with all his heart and all his soul, and to obey the words of the covenant written in this book. Then he had everyone in Jerusalem and Benjamin pledge themselves to it; the people of Jerusalem did this in accordance with the covenant of God, the God of their ancestors. Josiah removed all the detestable idols from all the territory belonging to the Israelites, and he had all who were present in Israel serve the Lord their God. As long as he lived, they did not fail to follow the Lord, the God of their ancestors.

This was a real turning around for the people of Judah. Sadly, it was not to last (as is often the case with revival), and after Josiah died, he was followed by Jehoahaz who “did evil in the eyes of the Lord, just as his predecessors had done” (2 Kings 23:32).

But a period of grace, renewal and reform took place which was to be among the great highlights of Judah’s history. And it was all solidly based on a clear commitment to the Word of God. Biblical revelation is always the basis for powerful renewal and revival.

The story of Josiah illustrates the critical role of written revelation to establish practice of faith. Josiah began the work of purification in Jerusalem some ten years before the discovery of the book of the Law in the temple (2 Chron. 34:3). It was the written Word that was the impetus to renewing the vow and centralizing worship at the temple. Though tradition and symbol are critical to faith, the written Word provides a foundation to endurance and faithfulness.

Indeed, all students of revival have noted the vital role the Word of God plays. Let me offer a few choice quotes on this. Brian Edwards in his 1990 volume Revival! puts it this way:

This total acceptance of Scripture as the Word of God, and instant obedience to its commands, has characterized those whom God uses in revival. There is no escaping this fact. The reforms that took place under the leadership of both Hezekiah and, more than a half century later, Josiah, were all stimulated by a love for the Word of God and obedience to it. A study of the lives of the leaders in revival will reveal the same thing. If we long for revival, we must begin here. Jonathan Goforth was greatly used in China and elsewhere in revival from 1908 onwards. Looking back at those years he had this to say: ‘We wish to affirm, too, that we can entertain no hope of a mighty, globe-encircling Holy Spirit revival without there being first a back-to-the-Bible movement.’ Goforth certainly practised what he believed, for in nineteen years he read through his Chinese New Testament fifty-five times!
The reason for this essential acceptance of Scripture is that in revival God uses his Word to change and correct his people, and there is always a renewed love and acceptance of Scripture. God will not trust leadership into the hands of those who deny the very weapon he is going to use more effectively than any other.”

The Word of God is crucial and we will not see God moving in glorious revival if we do not put the highest priority on Scripture, its proclamation, its reading, and its obedience. More recently Kevin DeYoung said similar things as he reminds us that the “first and most important mark [of revival] is a rediscovery of the Word of God”. Says DeYoung:

True revival will always be Bible saturated through and through. Revival is not simply renewed fervor for spiritual things. Buddhists have a fervor for spiritual things. Oprah and Tom Cruise have a hunger for spiritual things. God-wrought revival brings a fervor for the Bible, that we might live, feel, sing, pray, work, and worship according to the word of God.
In our day, the Bible will not be found while repairing the temple, but when the Spirit blows, the authority of the Bible will be rediscovered. Preachers will preach with greater unction as they preach line upon line from the Bible. The minister will plead with sinners as a dying man to dying men. Husbands will wash their wives in the word of God. Parents will instruct their children in the truth. At social settings, conversation will move from sports and the weather to discussion about the Scriptures. People of all ages will hunger to read, memorize, and study the Bible. They will love to hear good preaching. They will love to read good books. There will be renewed confidence in, desire for, and obedience to every jot and tittle of Scripture. That’s how revival starts, and without this first mark you have mere enthusiasm.

So if we crave for revival – and we all should – then we must crave for a fresh love of God’s Word, and a new willingness to read it, study it, and fully obey it. Without the Word of God fully embraced and championed, we will not see the revival we are looking for.

Let me finish with the words of Charles Spurgeon: “If we want revivals, we must revive our reverence for the Word of God. If we want conversions, we must put more of God’s Word into our sermons.”

6 Replies to “Josiah, Revival and the Word of God”