As the West grows increasingly darker, more ungodly, indeed more anti-God, more immoral, more culturally bankrupt, and more hostile to what so many of us believe in and value, we need to ask the question again: how are we to respond?

For example, is there a place for active resistance, and if so, what sort of resistance? I am not necessarily speaking here about armed rebellion (but who knows if that might become a morally licit option in days to come?). But I am speaking about things like civil disobedience, and perhaps even such things as a just revolution of sorts.

Of course I have written about both these options on a number of occasions elsewhere:

But so many conservatives and Christians are really wondering how we should then live, as the West goes from bad to worse. It is not just a rotting culture, but the scarcity of any sort of principled leadership, that is so hard to bear. Here in Australia a principled conservative was knifed in the back by his own party members, replaced by a Labor-lite leader.

In the US we have already had two terms of Obama and his attempts to destroy the nation. And now we may only have the unenviable options of a Clinton or Sanders vs a Trump. All three options could well spell the end of America and the American dream.

All over the West we have weak, craven, compromising and self-loathing leaders who seem intent on dragging the entire West down with them. The absence of real leadership is just heartbreaking. Just hours ago I wrote about the issue of whether we simply get the leaders we deserve.

That is a good question indeed, and I encourage you to have a read of my piece: billmuehlenberg.com/2016/02/23/on-getting-the-government-we-deserve/

But as things grow worse and worse, with few positive options on the horizon, we may have to increasingly speak of bands of resistance fighters defying the state and agitating for freedom, morality, and humanity. And this would not be the first time such a need arose. 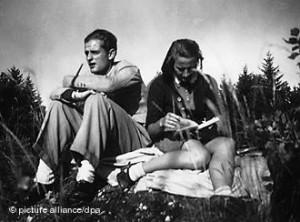 Often as things became very dark in the past, brave and principled resistance groups emerged to stand for what is right and speak out against that which is evil. And they often paid for their heroism with their own lives. Plenty of examples could be mentioned here, but let me focus on just one.

Not many of you would have heard of Hans and Sophie Scholl, siblings who took a stand against tyranny and injustice, and paid the ultimate price for doing so. Exactly 73 years ago they were executed by those they were rising up against in brave resistance.

The Holocaust Encyclopedia offers a nice summary of their lives and work, so let me present it here in full:

In 1942 Hans Scholl, a medical student at the University of Munich, his sister Sophie, Christoph Probst, Willi Graf, and Alexander Schmorell founded the “White Rose” movement, one of the few German groups that spoke out against Nazi genocidal policies.
Nazi tyranny and the apathy of German citizens in the face of the regime’s “abominable crimes” outraged idealistic “White Rose” members. Many of them had heard about the mass murder of Polish Jews; as a soldier on the eastern front, Hans Scholl had also seen firsthand the mistreatment of Jewish forced laborers and heard of the deportation of large numbers of Poles to concentration camps.
The group expanded into an organization of students in Hamburg, Freiburg, Berlin, and Vienna. At great risk, “White Rose” members transported and mailed mimeographed leaflets that denounced the regime. In their attempt to stop the war effort, they advocated the sabotage of the armaments industry. “We will not be silent,” they wrote to their fellow students. “We are your bad conscience. The White Rose will not leave you in peace!” Because the students were aware that only military force could end Nazi domination, they limited their aims to achieve “a renewal from within of the severely wounded German spirit.”
After the German army’s defeat at Stalingrad in late January 1943, the Scholls distributed pamphlets urging students in Munich to rebel. But in the next month, a university janitor who saw them with the pamphlets betrayed them to the Gestapo (German secret state police).
The regime executed Hans and Sophie Scholl and Christoph Probst on February 22, 1943. Officials also eventually arrested and executed philosophy professor Kurt Huber, who had guided the movement, and the rest of the “White Rose” members.
At his trial Huber remained loyal to the eighteenth century German philosopher Immanuel Kant’s ethical teaching, as he concluded his defense with the words of Kant’s disciple Johann Gottlieb Fichte:
And thou shalt act as if
On thee and on thy deed
Depended the fate of all Germany,
And thou alone must answer for it.

And a newspaper article today commentating the anniversary of their death concluded with these words:

During the brief trial before she was beheaded Sophie shared a cell with a political prisoner called Else Gebel.
She claimed that, on the eve of her death, Sophie said to her: ‘It is such a splendid sunny day, and I have to go. But how many have to die on the battlefield in these days, how many young, promising lives? What does my death matter if by our acts thousands are warned and alerted? Among the student body there will certainly be a revolt.’
No student revolt did take place but she earned her place in history. Books and films about her and the White Rose abound, streets, shopping centres and schools abound in Germany bearing her name.
One historian said: ‘Germans followed Hitler blindly to destruction. It took a wisdom and a strength far beyond their years to stand up to the colossal evil of Nazism and die unflinchingly when it struck back.’

Hans was only 24 when he was executed while Sophie was just 21. Christoph Probst was 23, and was executed just after his wife had given birth to their third child. A few quotes from these Christian heroes are worth offering here:

“Stand up for what you believe in even if you are standing alone.” (Sophie Scholl)

“The real damage is done by those millions who want to ‘survive.’ The honest men who just want to be left in peace. Those who don’t want their little lives disturbed by anything bigger than themselves. Those with no sides and no causes. Those who won’t take measure of their own strength, for fear of antagonizing their own weakness. Those who don’t like to make waves – or enemies. Those for whom freedom, honour, truth, and principles are only literature. Those who live small, mate small, die small. It’s the reductionist approach to life: if you keep it small, you’ll keep it under control. If you don’t make any noise, the bogeyman won’t find you. But it’s all an illusion, because they die too, those people who roll up their spirits into tiny little balls so as to be safe. Safe?! From what? Life is always on the edge of death; narrow streets lead to the same place as wide avenues, and a little candle burns itself out just like a flaming torch does. I choose my own way to burn.” (Sophie Scholl)

“I will cling to the rope God has thrown me in Jesus Christ, even when my numb hands can no longer feel it.” (Sophie Scholl)

“It’s high time that Christians made up their minds to do something . . . What are we going to show in the way of resistance… when all this terror is over? We will be standing empty-handed. We will have no answer when we are asked: What did you do about it?” (Hans Scholl)

“No one can know what secret inner ripening can come from suffering and sorrow. All we know is that every individual’s life is priceless – that each is dear to God.” (Christoph Probst)

While the West is of course not in a similar place to Nazi Germany, many concerned thinkers are wondering if we are quickly heading in that direction. With seemingly no one but megalomaniacs and demagogues leading the US polls, with genuine conservatives struggling to keep in the race, the future is not looking very good.

Hitler came in on a wave of populism, national discontent, and making grandiose promises. Some of the POTUS candidates seem to be following in similar style. Philosopher and law professor Robert George once said (at least if Twitter is to be believed) that this is a very precarious place to be in: “The danger to republics is that they will fall to demagogues. The vulnerability is greatest when a republic is in a state of moral decay.”

So things are looking rather grim at the moment, and some of those who have come along as a solution to the problem may in fact only make matters worse. In the light of all this, we need to at least think and pray about how we might go as resistance fighters if that becomes our main option.

At the very least, we desperately need the principles, courage and dedication Hans and Sophie Scholl and the White Rose movement had as we contemplate our next moves in the darkening days ahead.

17 Replies to “We Need Another Resistance Movement: Remembering the Scholls”