The book of Habakkuk is as amazing as it is brief. Three short chapters totaling just 56 verses contain so much theological, pastoral and apologetic richness. In many ways it is a lament (Habakkuk taking his complaints to God) as well as a theodicy (Why does God seem to allow great evil to happen).

The prophet Habakkuk would have been a contemporary of Jeremiah, just before the Babylonians came and destroyed Jerusalem. Habakkuk is greatly concerned about the great evil, violence and injustice in Judah, and cries out to God about it. But he sure did not expect the answer he received from Yahweh.

God knows all about Judah’s sins, and is going to judge them for it. But incredibly, he is going to use a nation seemingly far worse when it comes to injustice, bloodshed and evil: the awful Babylonians. What? How can this be? Yes, God’s people deserve punishment, but by this cruel and pagan nation? 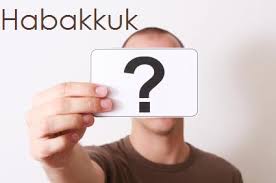 The Assyrians, who had earlier conquered Israel (the northern kingdom) were bad, but the Babylonians were even worse! How could God use them to punish the southern kingdom? They would totally wipe Jerusalem out in a scorched earth policy – nothing would remain. Talk about from the frying pan into the fire!

But in chapter two we read about how Yahweh will most certainly judge the Babylonians after he has used them to judge his own people. This is the same thing that we find in Isaiah 10 where we read how God is raising up the Assyrians to judge Israel, only for them to be afterwards judged by himself.

So God is in control of history and of the nations. He can sovereignly use one nation to judge another. But no nation is exempt and all are morally accountable for their actions. It is hard to see this when we are in the middle of a time of great crisis and grief. But God always has the big picture in mind and the longer term in view.

Though the fig tree does not bud
and there are no grapes on the vines,
though the olive crop fails
and the fields produce no food,
though there are no sheep in the pen
and no cattle in the stalls,
yet I will rejoice in the Lord,
I will be joyful in God my Savior.
The Sovereign Lord is my strength;
he makes my feet like the feet of a deer,
he enables me to tread on the heights.

Given the importance of the land and productivity to the Israelites, such a thought is indeed remarkable. Waylon Bailey reminds us of how disastrous all this was in an agrarian world: “The loss of any of these individually might be survived. Together, the losses spelled economic disaster and devastating loss of hope – loss of their daily provisions, loss of their economic strength, loss of the Lord’s blessing due to their sin.”

Indeed, all this is tied up with the covenant between God and Israel as we find in places like Deuteronomy 28. There we read about how obedience will bring productivity, abundance, security, peace and blessing. But disobedience will bring a curse – in the form of lost crops, unproductive vineyards, barrenness in humans and animals, drought, disease, famine, plagues, etc.

Thus for God’s people to see God allowing all this to come upon them is a shocking reminder of the broken covenant, and of all the blessings of God being stripped away, replaced with dreadful curses. However, even though everything will be torn away, Habakkuk could still rejoice in his God.

Such a sentiment is the antithesis to so much silly teaching of Christians today, including the woeful prosperity gospel. Habakkuk had the right perspective on this matter: the blessings of God, no matter how wonderful, are in themselves nothing. It is God Himself who is the believer’s blessing. As Chesterton once put it, “the gift without the giver is bare”.

David Prior puts it this way: “It is one thing to thank and praise God for all the good things in our lives, to rejoice in our blessings. It is quite another to rejoice in the midst of nothing, when all these blessings have been summarily and completely removed. The prophet has learned to rejoice, not in any particular quantity or quality of blessings, but in God himself.”

Or as O. Palmer Robertson says of this book (and Nahum and Zephaniah), “the salvational message of these prophets who must witness the breakup of nations centers on the possession of God himself. Since everything else has been taken away from them, they must look to him alone. All other blessings may be removed; yet they still will possess the ultimate blessing. All other things can have meaning only as they possess God himself and are possessed by him.”

And again: “In sharpest contrast with the spirit of complaint and unbelief manifested by Israel in the desert, Habakkuk openly recognizes the coming loss of all these luxuries as well as life’s necessities, but believes nonetheless. The promised mercies of God to his people extend well beyond all material losses. The entire present world order may pass away, but God’s grace to his people shall endure.”

Walter Kaiser comments: “Habakkuk teaches us how to rejoice when the lid has blown off everything and nothing that we once counted on as a reference point remains fixed: everything is gone, including the food we once took for granted.”

God and the nations

We read about similar things happening in Joel 1:8-12:

Mourn like a virgin in sackcloth
grieving for the betrothed of her youth.
Grain offerings and drink offerings
are cut off from the house of the Lord.
The priests are in mourning,
those who minister before the Lord.
The fields are ruined,
the ground is dried up;
the grain is destroyed,
the new wine is dried up,
the olive oil fails.
Despair, you farmers,
wail, you vine growers;
grieve for the wheat and the barley,
because the harvest of the field is destroyed.
The vine is dried up
and the fig tree is withered;
the pomegranate, the palm and the apple tree—
all the trees of the field—are dried up.
Surely the people’s joy
is withered away.

Again, devastation comes, but again, from the hand of the Lord. Whether he uses natural means or human agents, he can and does punish his people. All this raises questions for the contemporary believer. How should we think about evil rulers and nations? Should unjust aggression and tyranny be resisted and opposed – as in the spread of Nazism – or do we just sit by passively and take whatever comes our way?

A few quick responses. Whereas in the OT we had divinely inspired prophets of God telling us specifically what God was doing in the world, and how he was using the nations to accomplish his particular purposes, we do not have the same today.

I am not inspired – only perspired. Thus I can only surmise why things are happening today and how we might respond. I think we were right to seek to resist the tyranny and gross injustice of Hitler. But questions about how and how much God might have been allowing this or using such things to achieve his purposes are not so readily answered.

Therefore when asked about modern events such as the two American presidential contenders, I can only offer my speculation – not a sure word from the Lord. As to that issue, I believe it is more than likely possible that these two diabolical choices are part of God’s just judgment on a wayward and iniquitous America. But I cannot say much more with absolute certainty.

However there still is a place for resisting evil. We are not necessarily opposing God when we oppose evil – even though he likely is moving behind the scenes to bring about his purposes. On this, D. A. Carson has some helpful things to say concerning Joel 1:

This is a good place to reflect for a moment on how we should think about disasters. We should not adopt the stance of fatalists. If we can stop locusts today (satellites can sometimes spot incipient swarms that are then stopped by trucks with pesticides), then we should do so—in exactly the same way that we should try to stop war, plague, AIDS, famine, and other disasters. But in a theistic world where God is sovereign, we must also hear the summoning judgment of God calling his image-bearers to renounce sin’s selfism and cry to him for mercy.

I close by reminding us again of the great faith displayed by Habakkuk. Though he might witness the loss of everything, he made it his decision to keep God fully in view:

yet I will rejoice in the Lord,
I will be joyful in God my Savior.

8 Replies to “Habakkuk, Trust, God and the Nations”