We must not lose sight of the throne of God:

Throughout Scripture we read about God’s throne. It of course speaks to the rule and reign of God. It tells us about God’s sovereignty, his majesty, his dignity, his holiness, his justice, and his transcendence. Plenty of verses could be mentioned here. Let me just run with the first seven verses of Psalm 9: 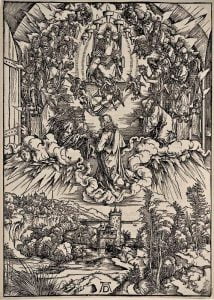 I will give thanks to the Lord with my whole heart;
I will recount all of your wonderful deeds.
I will be glad and exult in you;
I will sing praise to your name, O Most High.
When my enemies turn back,
they stumble and perish before your presence.
For you have maintained my just cause;
you have sat on the throne, giving righteous judgment.
You have rebuked the nations; you have made the wicked perish;
you have blotted out their name forever and ever.
The enemy came to an end in everlasting ruins;
their cities you rooted out;
the very memory of them has perished.
But the Lord sits enthroned forever;
he has established his throne for justice,

But here I want to focus on just one New Testament passage on this as found in Revelation 4. The entire chapter of 11 verses speaks to this, so here it is:

After this I looked, and behold, a door standing open in heaven! And the first voice, which I had heard speaking to me like a trumpet, said, “Come up here, and I will show you what must take place after this.” At once I was in the Spirit, and behold, a throne stood in heaven, with one seated on the throne. And he who sat there had the appearance of jasper and carnelian, and around the throne was a rainbow that had the appearance of an emerald. Around the throne were twenty-four thrones, and seated on the thrones were twenty-four elders, clothed in white garments, with golden crowns on their heads. From the throne came flashes of lightning, and rumblings and peals of thunder, and before the throne were burning seven torches of fire, which are the seven spirits of God, and before the throne there was as it were a sea of glass, like crystal.
And around the throne, on each side of the throne, are four living creatures, full of eyes in front and behind: the first living creature like a lion, the second living creature like an ox, the third living creature with the face of a man, and the fourth living creature like an eagle in flight. And the four living creatures, each of them with six wings, are full of eyes all around and within, and day and night they never cease to say,
“Holy, holy, holy, is the Lord God Almighty,
who was and is and is to come!”
And whenever the living creatures give glory and honor and thanks to him who is seated on the throne, who lives forever and ever, the twenty-four elders fall down before him who is seated on the throne and worship him who lives forever and ever. They cast their crowns before the throne, saying,
“Worthy are you, our Lord and God,
to receive glory and honor and power,
for you created all things,
and by your will they existed and were created.”

And a major point I wish to make here is this: too often Christians will read the book of Revelation because they love eschatology and they love to find matches with today’s headlines and what is found there. While all this has its place, that is not the main focus of the book.

Sometimes we can get so excited about setting dates and trying to pin down God’s prophetic clock that we miss the really vital themes here. God and his glory should be our main emphasis. God is the main focus of this book, and the throne of God plays a large role in this.

Indeed, as Joel Beeke says in his commentary on Revelation, “God’s throne is the primary picture in Revelation. The word throne occurs in the New Testament sixty-two times, and forty-seven of these are in Revelation. The book is dominated by the idea that there is a throne in heaven at the center of all things and that there is a glorious One who sits upon that throne. The centrality of God’s throne signifies His sovereignty. It presents His royalty, authority, and control of the universe.”

He goes on to say this: “Focus for a moment on the centrality of the throne. This is significant doctrinally rather than pictorially. The throne’s centrality declares that everyone and everything should acknowledge the triune God of the universe in the person of Jesus Christ as the Lord God. All derive their very existence from His will alone, and they were made to serve His pleasure. The throne is the center of everything.”

Let me offer a bit more commentary on this grand theme. J. Scott Duvall comments: “The ‘throne’ stands as one of the primary images of the entire book since it represents the center of ultimate reality—God’s sovereignty and majesty. . . . God’s throne or sovereign rule is the centerpiece around which everything else revolves.”

He continues: “Divine sovereignty stands as the primary theological theme of Revelation 4-5. God on his throne represents the very center of all reality, a vivid reminder to human beings that we do not occupy that role.”

And the themes of God’s holiness and his judgment on sin are paramount here. As William Dumbrell puts it: “The image of the throne is both political (the place where God rules over all creation) and cultic (the divine throne room is the holy of holies of heaven itself, cf. 11:19; 15:5-8). God’s holiness will always mean judgement on evil. The one who sits on the throne is the holy God of the Sinai covenant who demands obedience to his righteous will.”

It also needs to be stressed why this theme is so important in this particular book. In chapters 2-3 of course we have the letters to the seven churches, and we read there about the persecution, opposition and hostility believers faced from hostile rulers and evil powers. Knowledge of our sovereign God who is on the throne is what we all need during such times.

The vision that unfolds is the answer to all the questions and issues raised up till now, and the picture of the power and majesty of God sets the wider context that all the followers of Jesus need to see as their own. Why worry about temporary opposition, either from Jews or pagans, if God is truly enthroned and all-powerful? Why compromise with surrounding culture when the patterns of authority there are just a shadow of the reality of God’s authority? And why falter and stumble if this vision represents your inheritance and your destiny?

The main point of chs. 4-5 is God’s punitive and redemptive purposes for the world beginning to be accomplished through the death and resurrection of Christ, through whose reign God’s purpose for creation will be consummately executed and divine glory accomplished. The pastoral purpose is to assure suffering Christians that God and Jesus are sovereign and that the events that the Christians are facing are part of a sovereign plan that will culminate in their redemption and the vindication of their faith through the punishment of their persecutors.

We need the same assurance and comfort today. May a meditation on the great themes of Rev. 4-5 spur us on to keep serving our Lord amidst all the darkness and resistance we face all around us. God is indeed still on the throne, and that is the one fact that we must always keep in mind.

Some helpful commentaries on Revelation

7 Replies to “The Throne of God”