The episode in the Old Testament about Saul and the witch of Endor raises a number of questions, chief of which is this: Can God use a means which he had expressly forbidden elsewhere? Other questions include: Did Samuel actually return from the dead? Did the witch successfully do this? Was the entire appearance a deception?

Let’s begin with a bit of background. The Philistines had come down to within around five miles of where Saul was staying. This was a serious incursion. As Mary Evans notes, “This was no minor battle to be carried out between the standing armies but a major show down between the two nations.” 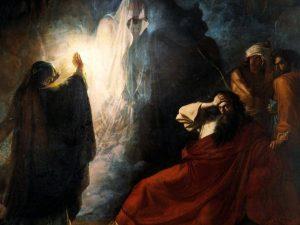 By this point Saul had well and truly lost God’s favour. Indeed, God had departed from him. His kingdom was taken away from him and he was rejected as king (1 Sam. 13:14; 15:28). Because of his sin and rebellion, Saul was no longer the brave king he used to be but a fearful man: “When Saul saw the Philistine army, he was afraid; terror filled his heart” (v. 5).

In the past he had consulted with God before going into battle (eg., 1 Sam. 14:37), and he thinks he can continue to do so. But after being met with only divine silence, he takes matters into his own hands: “He inquired of the Lord, but the Lord did not answer him by dreams or Urim or prophets. Saul then said to his attendants, ‘Find me a woman who is a medium, so I may go and inquire of her’” (vv. 6-7).

Consulting spiritists and mediums, and engaging in necromancy (communicating with the dead), are clearly forbidden in Scripture (Exodus 22:18; Leviticus 19:31; Deuteronomy 18:9-13 – and later on, Isaiah 8:19-20). Saul knows this full well: earlier he had even “expelled the mediums and spiritists from the land” (v. 3).

Indeed, he had been told by Samuel not long ago: “For rebellion is like the sin of divination, and arrogance like the evil of idolatry. Because you have rejected the word of the LORD, he has rejected you as king” (1 Sam 15:23). Yet here he is trying to get divine guidance through Samuel by means of divination!

You may well be familiar with the rest of the story. Saul sneaks past the Philistines incognito to consult the diviner at Endor. Samuel does indeed appear, but not to answer his questions about the battle. Instead he further rebukes him, just as he had done when he was alive. Samuel gives Saul some real bad news:

“Why do you consult me, now that the Lord has departed from you and become your enemy? The Lord has done what he predicted through me. The Lord has torn the kingdom out of your hands and given it to one of your neighbors—to David. Because you did not obey the Lord or carry out his fierce wrath against the Amalekites, the Lord has done this to you today. The Lord will deliver both Israel and you into the hands of the Philistines, and tomorrow you and your sons will be with me. The Lord will also give the army of Israel into the hands of the Philistines” (vv. 16-18).

Sure enough, 24 hours later Saul is dead. Given that those who commit the sin of divination and mess around with the occult are to be sentenced to death (Lev. 20:6, 27), there is some divine justice at work here. Saul’s downward spiral finally comes to a sad and tragic end.

But what about the appearance of Samuel? As Evans notes, “this whole account is, probably intentionally, shrouded in mystery. Was the woman a fraud or did she genuinely have some kind of clairvoyant skill? Was it really the dead Samuel coming back to life, or was it the appearance of an evil spirit or some kind of a trick? Was the woman’s recognition of Saul based on her own insight or did his disguise drop for a second? Did Saul really hear from Samuel or just deceive himself into hearing all the things that he knew and feared?”

So what do we make of all this? Was this a genuine appearance by Samuel? It seems that it indeed was. But it was God calling the shots here, for his own divine purposes. The diviner in this case was merely a foil in the bigger plans of Yahweh.

Walter Kaiser says that there was an authentic appearance of the dead here, but “one that did not result from her witchcraft. Instead, it was God’s final means of bringing a word to a king who insisted on going his own way. . . . Our conclusion is that God allowed Samuel’s spirit to appear to give Saul one more warning about the evil of his ways.”

Norman Geisler also thinks this is the best option: “the witch did not bring up Samuel from the dead, but God Himself intervened in the witch’s tent to rebuke Saul for his sin. . . . The miracle was not performed through the witch, but in spite of her.”

So Saul was fully responsible for making this terrible choice, and he met his just deserts as a result. It is a sober warning about seeking God by unapproved means. Robert Bergen puts it this way: “The Torah prohibits necromancy not because it is a hoax but because it promotes reliance on supernatural guidance from some source other than the Lord.”

Indeed, this entire episode also speaks to us today. Far too many folks are dabbling in the occult and spiritism today. The Bible tells us to avoid all this like the plague. It does not deny that such things can actually work, but that they are harmful and to be avoided at all cost.

As David Firth notes, “the OT only condemns necromancy; it never questions its possible effectiveness.” Or as Bill Arnold comments, “Israel’s ban on magic was a unique characteristic of the nation’s overarching worldview. . . . Significantly, however, the Old Testament ban on magic is not based on the assertion that magic is ineffective. On the contrary, magic is banned precisely because it does work.”

Let me conclude with the timely words of Mary Evans: “Saul’s excursion into forbidden occult territory brought him no joy, no reassurance and indeed no benefit at all but only further despair. There is a warning here which it seems the author intends to stand.”