History was meant to be the vehicle by which we learn some hard lessons. But regrettably we mostly ignore the lessons of history, and therefore keep repeating the same old mistakes. And one of the great lessons of history is the folly of seeking to appease our enemies.

When groups have clearly declared their intentions to kill you, you do not seek to just get along with them, or compromise with them – you seek to steadfastly resist them, or else. The story of the Second World War is a classic example of this.

And with each passing year, the threat grew worse and worse. But most folks fell for the appeasement trap, thinking they could all just happily get along with Hitler. It was a doomed policy, which we can now clearly see with the aid of hindsight. 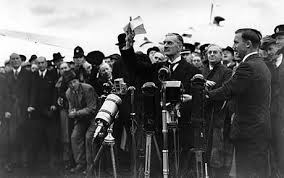 September 30, 1938 – British Prime Minister Neville Chamberlain signs the Munich Agreement with Hitler. He returns to England and declares “Peace for our time,” and is hailed as a hero by the British population.
October 15, 1938 – Nazis occupy the Sudetenland (the German-speaking part of Czechoslovakia).
November 9-10, 1938 – Kristallnacht (The Night of Broken Glass).
March 15-16, 1939 – Nazis take all of Czechoslovakia.
May 22, 1939 – Nazis sign a ‘Pact of Steel’ with Italy.
August 23, 1939 – Nazis and Soviets sign a Non-Aggression Pact.
September 1, 1939 – Nazis invade Poland.
September 3, 1939 – Great Britain and France declare war on Germany.
September 17, 1939 – Soviet troops invade eastern Poland.
April 9, 1940 – Nazis invade Denmark and Norway.
May 10, 1940 – Nazis invade France, Belgium, Holland and Luxembourg.
May 10, 1940 – Chamberlain resigns and Churchill becomes Prime Minister.
May 7, 1945 – Germans surrender; war in Europe ends.
November 16, 1945 – Churchill said in a speech: “President Roosevelt one day asked what this War should be called. My answer was, ‘The Unnecessary War’.”

Yes, because of the failed policy of appeasement, this was an unnecessary war, but some 60 million lives had to be lost for this folly. As Churchill famously said: “An appeaser is one who feeds a crocodile, hoping it will eat him last.”

But have we learned anything here? Today we are also engaged with a mortal enemy, one that has fully declared its hand. But instead of taking head on political Islam, most Western leaders foolishly think that a policy of appeasement will work instead.

Fortunately a few folks are aware of what is going on here. Daniel Greenfield has just penned an incisive article on “Peace With Islam in Our Time” which is well worth quoting from. He begins:

Abdallah Bulgasem Zehaf-Bibeau, the crackhead turned Jihadist spawned by the mating of a Canadian immigration official and a Libyan Muslim Jihadist, just wanted peace. He told a co-worker, “There can’t be world peace until there’s only Muslims.” Then he tried to usher in peace, the Islamic way, by opening fire near the Canadian parliament. Meanwhile in Israel a reporter interviewing Arab Muslim settlers in Jerusalem found that they too wanted peace. On their terms. “Yes we want peace,” one of them said, “but peace means no Jews.”
When negotiating peace with other cultures it’s a good idea to make sure that the words you are using mean the same thing. Most Muslims and Westerners want peace. But to Westerners peace means co-existence. To Muslims, peace means the end of your existence.
Ideas carry heavy cultural baggage. Peace in the West summons up images of Armistice Day, of the Christmas Truce of WW1 in which French, German and English soldiers could share meals and play soccer together. It carries with it the subversive idea that both sides realize the war isn’t worth fighting. Such a subversive idea has no place in Islam. The Jihad is at the heart of Islam. To question the holy war is to also question the faith. When war is religion then peace through setting aside war is heresy.
The Western idea of peace is a wholly alien one to Islam. In Islam, peace does not come from men transcending their differences, but from destroying men who think and live differently. That is the function of the religious police of our allied “moderate Muslim” countries who seek out the practice of other religions and other ways of living in places like Saudi Arabia and suppress their practitioners.
Islamic peace does not come from diversity, from accepting the existence of other nations, religions and peoples, but from unity through Islam and eliminating as many differences as possible. If Islam is the source of peace, then all that which is “not Islam” is the cause of war. Kill the Jews. Kill the Christians. Then there will be peace.
The Islamic idea of peace was aptly expressed by Zehaf-Bibeau and our anonymous Jerusalem Jihadist. It is not based on a recognition of the humanity of one’s fellow man, but on a rejection of their humanity. As Mohammed curtly put it in missives to the leaders of non-Muslim countries in the region, “Aslim, Taslam.” Convert to Islam and you’ll have peace.

The Nazis and Communists were the products of years of indoctrination that taught them to see opponents as less than human and peace as being obtainable only through their destruction. Japan, which had a longer history of dehumanizing outsiders, proved to be an even tougher nut to crack. Islam has a history of over a thousand years of continuously dehumanizing non-Muslims and identifying peace and their enslavement as one and the same. It is impossible to live in peace with Muslims who think that there can be no peace as long as non-Muslims continue to live independent lives.
In the Muslim worldview, war happens because non-Muslims exist. War is caused by the infidel, the disbeliever and the Muslim hypocrite who does not truly commit to the practice of Islam. The Jihad purifies the world of non-Muslims; it eradicates the “moderate” Muslims who have been compromised by Western culture. It is a war of extermination against the un-Islamic.

Islam does not obtain peace through peace, but through war. It seeks a world without conflict by killing anyone who might disagree with its totalitarian ideology. Proposing the peace of co-existence to an ideology to which peace means its own supremacy is a foolish and deranged act. Our outreach to the Muslim world does not lack for a common language, but for common ideas. Both sides may speak of peace, but for one side peace really means war.
Languages are not only made up of words, but of values. It is not enough to bring a dictionary to a negotiation if the two parties are reading from different moral and ethical traditions. Just because we translate “Salaam” as peace and agree that we both want peace does not mean that we have the same idea of what peace is. The West sees peace as living side by side with Muslims. Muslims see peace as the end of the West.

Exactly so. Once again, we have failed to learn from history. And for that we are paying an incredibly high price.