Once again American cities are burning. And once again, there is a truth deficit as to why this is happening. The mainstream media is putting its usual leftist spin on things, and in the meantime, anarchy and lawlessness are hitting our streets.

Thus it is time to state a few cold facts here. With so much commentary already available on all this, I will not reinvent the wheel, but simply share some of the insights and wisdom of others on this issue. Let me start with the basics. 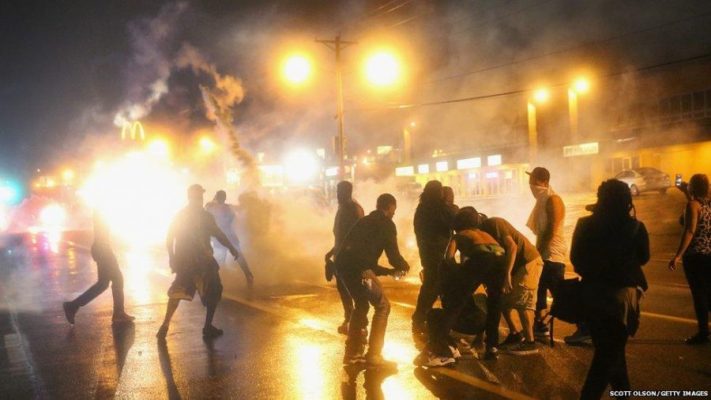 On August 9, 2014 in Ferguson, Missouri an 18-year-old black man, Michael Brown, was fatally shot by white police officer Darren Wilson. Later that month a grand jury hearing was initiated over the case, and on November 24 a decision was announced that the jury elected not to indict Wilson.

But the rioting has been going on ever since, both in Ferguson and in other cities. Leftists from Obama on down have been in fact instigating much of this, and the cultural Marxists are quite happy to use these occasions to continue their war on America. J. Christian Adams comments on this big-picture perspective:

When history remembers the Obama administration, the flames of Ferguson will light up our memories. It wasn’t just an AutoZone and Jade Nails burning up in the fires of Ferguson, it was also the “Hope” of 2008 going up in smoke. Instead of hope, the age of Obama has been characterized by racial division and discord. Obama and Holder commanded the police to behave themselves. The police behaved, and look what happened.
Last week, members of the New Black Panther Party were arrested by state officials for plotting to use pipe bombs against the St. Louis Gateway Arch and for purchasing guns in a plot to kill as many policemen as possible. Notice it was state officials who made the arrests. The Washington Times had a no-longer-surprising quote from an Obama administration official characterizing the plot to blow up the arch and kill (presumably) white police officers as “not a serious threat.”

And the Islamists are also quite happy to co-opt and exploit all this, marching in the protest rallies, even demanding that Israel get out of Palestine, etc. Talk about radicals using a local situation to push for global revolution. See more on this here: www.foxnews.com/us/2014/11/18/muslim-groups-seek-to-co-opt-ferguson-protests-says-watchdog-group/

As to the actual case, Ann Coulter offers a few salient facts:

Anyone following this case has seen the video of Big Mike robbing a store and roughing up an innocent Pakistani clerk about 10 minutes before being shot by Officer Wilson. They’ve seen him flashing Bloods gang signs in photos. They know Brown’s mother was recently arrested for clubbing grandma with a pipe over T-shirt proceeds. They’ve seen the video of Brown’s ex-con stepfather shouting at a crowd of protesters after the grand jury’s decision: “Burn this bitch down!” Liberals will say none of that is relevant in court, but apparently they don’t think actual evidence is relevant either. It’s certainly relevant in the court of public opinion that the alleged victims are a cartoonishly lower-class, periodically criminal black family.

Jason Riley offers more inconvenient truths, including the fact that the overwhelming majority of black homicide deaths are caused by blacks:

The black teen in Ferguson, Mo., robbed a store, attacked a white police officer and was shot dead while resisting arrest. That was the conclusion of a St. Louis County grand jury that brought no charges against the officer after considering all the physical evidence, along with eyewitness accounts from blacks in the vicinity of the confrontation. Not that any amount of evidence would have stopped the hooligans in Ferguson Monday night who were determined to use Brown’s death as a pretext for more bad behavior. Nor will evidence thwart liberals who are bent on making excuses for black criminality and pretending that police shootings are responsible for America’s high black body count.
According to the FBI, homicide is the leading cause of death among young black men, who are 10 times more likely than their white counterparts to be murdered. And while you’d never know it watching MSNBC, the police are not to blame. Blacks are just 13% of the population but responsible for a majority of all murders in the U.S., and more than 90% of black murder victims are killed by other blacks. Liberals like to point out that most whites are killed by other whites, too. That’s true but beside the point given that the white crime rate is so much lower than the black rate.
Blacks commit violent crimes at 7 to 10 times the rate that whites do. The fact that their victims tend to be of the same race suggests that young black men in the ghetto live in danger of being shot by each other, not cops. Nor is this a function of “over-policing” certain neighborhoods to juice black arrest rates. Research has long shown that the rate at which blacks are arrested is nearly identical to the rate at which crime victims identify blacks as their assailants. The police are in these communities because that’s where the emergency calls originate, and they spend much of their time trying to stop residents of the same race from harming one another.

What the MSM also is not telling us is that many of the shops destroyed by these roving gangs of thugs and militants were minority-owned small businesses, including black businesses. Where is the MSM outcry about this? Selective outrage is what the left and the MSM specialise in. And since then, we have had cases of black policemen shooting unarmed white citizens. The result? Crickets chirping.

As if all this were not bad enough, consider how the despicable leftist New York Times actually printed the home address of Wilson! How low can you go. The only sniff of justice here is that the favour was returned, and alternative media outlets began offering the addresses of the reporters who did this: rightwingnews.com/media/two-new-york-times-reporters-posted-darren-wilsons-home-address-look-see-home-addresses/

Add to this the fact that when the opposite verdicts are reached, we don’t see whites rampaging in anarchist riots. Recall the O.J. Simpson case for example: www.truthrevolt.org/news/flashback-oj-simpson-verdict-reactions-no-justice-no-rioting

But consider also the thoughts of some leading black Americans on this. American footballer Benjamin Watson who plays for the New Orleans Saints posted a powerful piece on his Facebook page about Ferguson, and he concludes with these words:

Finally, Christian pastor Voddie Baucham highlights the real issues here, and it is not systemic racism as the lefties scream:

Rest assured, I do believe there are systemic issues plaguing black men. These issues are violence, criminality, and immorality, to name a few. And all of these issues are rooted in and connected to the epidemic of fatherlessness. Any truly gospel-centered response to the plight of black men must address these issues first and foremost. It does no good to change the way white police officers respond to black men if we don’t first address the fact that these men’s fathers have not responded to them appropriately.
There is indeed an epidemic of violence against black men. However, that violence, more often than not, occurs at the hands of other black men. In fact, black men are several times more likely to be murdered at the hands of another black man than they are to be killed by the police. For instance, in the FBI homicide stats from 2012, there were 2,648 blacks murdered. Of those, 2,412 were murdered by members of their own ethnic group. Thus, if I am going to speak out about anything, it will be black-on-black crime; not blue-on-black. I want to apply the gospel and its implications in a way that addresses the real issue. If a few black men being killed by cops requires a national “dialogue,” what in the world does the overwhelming number of black-on-black murders require? If the police do not see black men through the proper gospel-centered, image-of-God lens, what does the black-on-black murder rate say about the way we see ourselves?…
The underlying malady that gives rise to all the rest of these epidemics is immorality and fatherlessness. We know that fatherlessness is the number one indicator of future violence, dropout rates, out-of-wedlock births, and future incarceration. And in the black community, more than 70 percent of all children are born out of wedlock! Fatherlessness is the bane of the black community.

In the end, the best lesson my children can learn from Ferguson is not that they need to be on the lookout for white cops. It is far more important that I use this teachable moment to remind them that “God is not mocked, for whatever one sows, that will he also reap” (Gal. 6:7). Moments before his death, Michael Brown had violently robbed a man in a store. A man doing the best he could to make a living. Minutes later, Brown reaped what he sowed, and was gunned down in the street. That is the sad truth.
My sons have far more to fear from making bad choices than they have to fear from the police. The overwhelming majority of police officers are decent people just trying to make a living. They are much more likely to help you than to harm you. A life of thuggery, however, is NEVER your friend. In the end, it will cost you . . . sometimes, it costs you everything.

Now that is a voice of reason and balance in the midst of all this madness. We need more men like him. And we need to get truth into the public arena about what is happening in Ferguson.

15 Replies to “Facts on Ferguson”