A meme making the rounds on social media has much to say about the state of many Western nations today. Thus it has become quite popular to post it and share it. The short saying, attached to a picture of John Calvin, says this: “When God wants to judge a nation, He gives them wicked rulers”.

Now I realise that far too often stuff like this is passed around without any careful check to see if indeed it is so. I am sure I have been guilty at times of doing this as well. But often I do want to get to the bottom of a matter, and ascertain just what is accurate and what is not.

Since I have long had an interest in Calvin, and since the saying is a neat one, I wanted to make sure he did in fact say it. So I actually spent a bit of time sniffing around on this, as well as asking a few like-minded friends. After a day or two of digging around, the best I can come up with can be gleaned from two Calvin sources. 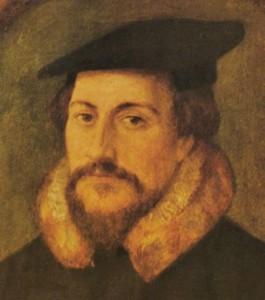 Neither one says exactly what this meme says, but both come pretty close. So while we can dismiss Calvin as the direct author of that particular meme quote, we can say it reflects for the most part what he did say. His two sources are these (and there may be a few others – calling all Calvin scholars!).

The first is from his famous Institutes of the Christian Religion which of course had been through various editions during his lifetime (1509-1564). The first edition of the Institutes appeared in 1536 in Latin, with a French version coming in 1541.

Four more Latin and four more French revisions came along, with the fifth and final ones appearing in 1559 (Latin) and 1560 (French). So of course to track something down depends in good measure on what version we are using, and then too we must consider the English translations available as well. I happen to have the Beveridge English translation.

However many consider the English translation of Ford Lewis Battles to be among the best available. For those wanting to delve much deeper into the Institutes and its significance, many volumes can be consulted, with one of the best being A Theological Guide to Calvin’s Institutes edited by David Hall and Peter Lillback (P&R, 2008).

The editors say this in their foreword:

Calvin’s Institutes (5th edition, 1559) is one of the wonders of the literary world. . . . Through its five edition, Calvin’s summa pietatis grew to five times its original length and from six to eighty chapters, divided into four books of which the fourth matches for length the first three put together. It began as a catechetical account of foundational protestant Christianity, loosely modelled on Luther’s Smaller Catechism, covering in sequence the Decalogue, the Apostle’s Creed, the Lord’s Prayer, the gospel sacraments and the five rites incorrectly so called, and the life of freedom under the Word of God in church and state; all with an apologetic cast, in hope of gaining respect and acceptance from the King of France, to whom Calvin addresses a courteous dedicatory letter. New material mutated the second edition (1539) into a sort of summa theologiae… [B]y 1559 the Institutio was twice as long as in 1539. It was now a full scale declaration of biblical Christianity as Calvin saw it….

But I digress! Back to wicked rulers. In Book four, chapter 20, section 25 of the Institutes we find this:

But if we look to God’s Word, it will lead us farther. We are not only subject to the authority of princes who perform their office toward us uprightly and faithfully as they ought, but also to the authority of all who, by whatever means, have got control of affairs, even though they perform not a whit of the princes’ office. For despite the Lord’s testimony that the magistrate’s office is the highest gift of his beneficence to preserve the safety of men, and despite his appointment of bounds to the magistrates he still declares at the same time that whoever they may be, they have their authority solely from him. Indeed, he says that those who rule for the public benefit are true patterns and evidences of this beneficence of his; that they who rule unjustly and incompetently have been raised up by him to punish the wickedness of the people; that all equally have been endowed with that holy majesty with which he has invested lawful power. I shall proceed no farther until I have added some sure testimonies of this thing. Yet, we need not labor to prove that a wicked king is the Lord’s wrath upon the earth [Job 34:30, Vg.; Hos. 13:11; Isa. 3:4; 10:5; Deut. 28:29], for I believe no man will contradict me; and thus nothing more would be said of a king than of a robber who seizes your possessions, of an adulterer who pollutes your marriage bed, or of a murderer who seeks to kill you. For Scripture reckons all such calamities among God’s curses. But let us, rather, pause here to prove this, which does not so easily settle in men’s minds. In a very wicked man utterly unworthy of all honor, provided he has the public power in his hands, that noble and divine power resides which the Lord has by his Word given to the ministers of his justice and judgment. Accordingly, he should be held in the same reverence and esteem by his subjects, in so far as public obedience is concerned, in which they would hold the best of kings if he were given to them.

As can be seen, I have put in bold the two lines that come closest to the meme saying. But there are other places to look. We also find more along these lines in Calvin’s commentary on the book of Romans, particularly 13:1-7. This is what he says about vv. 3-4:

He now commends to us obedience to princes on the ground of utility; for the causative for, is to be referred to the first proposition, and not to the last verse. Now, the utility is this, — that the Lord has designed in this way to provide for the tranquillity of the good, and to restrain the waywardness of the wicked; by which two things the safety of mankind is secured: for except the fury of the wicked be resisted, and the innocent be protected from their violence, all things would come to an entire confusion. Since then this is the only remedy by which mankind can be preserved from destruction, it ought to be carefully observed by us, unless we wish to avow ourselves as the public enemies of the human race.
And he adds, Wilt not thou then fear the power? Do good. By this he intimates, that there is no reason why we should dislike the magistrate, if indeed we are good; nay, that it is an implied proof of an evil conscience, and of one that is devising some mischief, when any one wishes to shake off or to remove from himself this yoke. But he speaks here of the true, and, as it were, of the native duty of the magistrate, from which however they who hold power often degenerate; yet the obedience due to princes ought to be rendered to them. For since a wicked prince is the Lord’s scourge to punish the sins of the people, let us remember, that it happens through our fault that this excellent blessing of God is turned into a curse.

Again, that which is in bold comes the closest to the saying above. As mentioned, there may be other places where Calvin directly deals with this topic. (Hey, where are all those Calvin scholars when you need them?) But it seems clear from the above that while the meme is not entirely accurate – that is, it is not a verbatim quote from Calvin – it does reflect pretty closely what he in fact said on these matters.

Of course how we are to understand and apply this to today’s political climate is another matter. Is an evil ruler like Obama God’s judgment on America for example? I am quite open to the idea. But for those who are interested, I did write on all this in greater detail elsewhere, so you might have a look at this: https://billmuehlenberg.com/2016/02/23/on-getting-the-government-we-deserve/

In the meantime, the words both attributed to, and actually written by, Calvin are certainly something to think about. As the West continues to go downhill, and its selection of leaders gets worse by the day, maybe there is something to this idea of being under divine judgment. If true, it would not surprise me at all to be honest.

15 Replies to “Calvin on Wicked Rulers and God’s Judgment”