Leftists like to call themselves “progressives”. They think all their radical social agenda items are a sign of moving forward, of progress. But the truth is just the opposite. They really want to take us backwards. Their vision of the new and liberated society is actually centuries old.

They want to take us back to a day when genuine diversity of opinion did not exist, and only one political correct line of thought is allowed.

They want us to all inhabit a monochrome culture where there is only one tolerated way to think and believe. All recalcitrants will be prevented from freely offering their own views.

They want to silence all religious voices except their own – the religion of secular humanism. Their religious ideology must be promoted and enforced, while all others must be silenced.

They want to silence any and all critics of their radical agenda, and ensure that only their voices are heard. Any dissenters will be dealt with by the PC thought police, and re-education camps.

We see this happening every day with the progressives. Contrary opinions are simply not allowed with things like global warming, all things homosexual, multiculturalism, or the threat of Islam. We will all be silenced and forced to go along with the various ideologies and PC agendas of the day.

In my recent book Strained Relations I offered almost 200 cases of folks losing their jobs, being fined, or even jailed, for simply saying things like, ‘marriage is between a man and a woman’. How in the world did we get to such a place where to state the obvious now makes you guilty of hate speech and subject to draconian repercussions?

Of course people who do not submit to the party line on things like climate change also know full well the ugly reprisals that come their way. The same with those who may differ on anything to do with the shibboleth of evolution and the like. Any dissenter will immediately be punished.

This was the hallmark of more recent tyrannies of course, especially the Marxian variety. In today’s climate of hyper political correctness, coupled with a culture of offense, wherein anyone who feels offended by anything can now press charges (and usually win), free speech is disappearing fast.

As George Orwell warned, “If liberty means anything at all, it means the right to tell people what they do not want to hear.” But that is the mark of a truly progressive society. The kind of society our left trendy progressives are creating is anything but that. 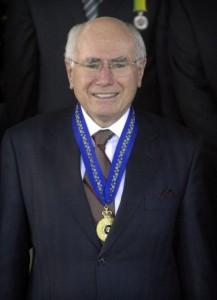 We have regressed to a new tyranny, a new Group Think, and a new grey ideological straight jacket. And I am not alone in these concerns. Just today one of our former great Prime Ministers has come out and said the very same thing. There is a great piece about John Howard in today’s Weekend Australian which is worth sharing here. Paul Kelly’s article begins:

John Howard has sounded an alarm about the culture war in Australia — warning that people are being “cowed” against stating their views on issues and that a dangerous anti-religious push has emerged — and branded as “pernicious” the Victorian government’s hostility to religious connections in schools.
Mr Howard said there was a “get Pell” mentality in “some sections of the media”, referring to Cardinal George Pell, who is about to answer questions before the child sex abuse royal commission and has been the subject of allegations of sex abuse by material coming from Victoria Police.
In relation to gay marriage, Mr Howard said: “There is nothing homophobic about supporting traditional marriage. Everybody did in the parliament in 2004.
“May I remind you that in 2004, when I inserted the definition in the Marriage Act, the Labor Party supported it. You ought to be able to have sensible discussion on these sorts of things. And you should be able to express a view on these things. But there is a sense in which people are so frightened of being accused of being discriminatory or intolerant that they don’t speak the commonsense view.”
Mr Howard said the standards of civil society in Australia were being undermined by a growing intolerance towards people who did not subscribe to a range of progressive views.
“I think the problem is that too few people are prepared to call it for what it is,” he said. “I think people are cowed because they think, ‘I can’t say that because I might lose votes or I might offend somebody’.”
He said there was a new form of “minority fundamentalism” emerging, typified by the use of the anti-discrimination law in Tasmania to silence the Catholic Church from stating its position on marriage. Having read the document issued by the Catholic bishops, Mr Howard said: “How anyone can read that as offensive to people who favour same-sex marriage or gay or lesbian people is beyond me.”
He said the situation in Victoria under new guidelines for religious instruction was that “from now on you can sing Jingle Bells in schools but not Once in Royal David’s City or Silent Night”.
“This is pernicious,” he said. “I’m surprised there hasn’t been a greater outcry about it. Nobody is forced to believe in God. Nobody’s forced to follow Christianity. The observance of Christmas and all that goes with it is part of our culture. I must say I have never come across a person of the Jewish faith or of the Muslim faith who has complained that they have had Christianity forced upon them.”
Warning that such cultural intolerance would provoke a backlash, Mr Howard said one of the reasons Donald Trump was succeeding in the Republican primaries was that people felt he was speaking directly to them and shunning any political correctness.
While saying he “would tremble at the idea of Trump being President of the US”, Mr Howard said the Republican frontrunner was benefiting because other politicians refused to acknowledge public resentments. While he found some of Mr Trump’s comments “appalling”, his success was “a measure of how people feel”.
These comments recall his performance as prime minister when Mr Howard campaigned against political correctness, resisted the idea of a superior morality on the part of elites and had to manage the rise of Pauline Hanson, who exploited economic grievances.
Mr Howard expressed disappointment that the Abbott government had abandoned its proposed free speech changes to section 18c of the Racial Discrimination Act after winning an election mandate on the issue. He said it was probably only with the Andrew Bolt case that people realised the application of this provision “was as spiteful as it turned out to be”.
Branding the climate of repression as “pernicious”, Mr Howard said there was “almost a fear” among people to articulate the views he was expressing because of concern they would “offend our multicultural ethos” or be “branded as intolerant”.

Wow, when is the last time you heard a major political figure speak out like that? I encourage you to read the entire piece. It is such strong resistance to the PC thought police as this that makes me pine for the good old days of the Howard government.

This makes me wish he would stage a political comeback. What he says is absolutely true, and absolutely vital. But so very few politicians are willing to stand up and be counted here. Most are deplorable cowards. This is especially appalling when it comes to the Liberals.

They should be leading the charge here, but most are spineless wonders. As Janet Albrechtsen recently said about one example of Liberal cowardice:

Last week on the ABC’s Q&A when Liberal MP Steve Ciobo was asked whether he believed in free speech, he said: “I’m attracted to the principle.” Really? That’s it? I might be attracted to a dress in a shop but I’m not committed to it. Surely a Liberal MP, a minister, can do better at defending a core Western freedom. You’re not going to convince anyone about the virtues of free speech by saying you kind of like it, with the same commitment as you might say you like cornflakes in the morning.

The multicultural virus has impaired even self-professed cultural warriors. As prime minister, Tony Abbott decided that defending free speech by reforming section 18C of the Racial Discrimination Act was too hard once a few migrant groups kicked up a fuss.
Sure, the Senate was unhelpful, but rather than make a humiliating retreat, a warrior of Western culture should fight on to defend the marketplace of ideas, rather than kowtow to the marketplace of outrage that has been fuelled by multiculturalism.

Yes many of us were quite let down by Abbott on that one. That is why more than ever we need strong, principled leaders. As Howard said, one can understand why Trump is doing so well. Whether or not he is really principled is a moot point, but he certainly speaks his mind and does not give a rip what anyone else thinks.

The progressives are taking us backwards, and quickly. Unless we get some fearless champions like a Bernardi or a Christensen or another Howard into the upper echelons of politics, we will continue to go downhill. Let me conclude with some important words from Melanie Phillips. In her autobiography Guardian Angel she says:

All, however, is not lost. A culture can pull back from the brink if it tears off its suicidal blinders in time. This can still be achieved — but it requires a recognition above all of the paradox that so many fail to understand, that freedom only exists within clear boundaries, and that preserving the values of Western civilisation requires a robust reassertion of the Judeo-Christian principles on which its foundations rest. And that requires moral, political, and religious leadership of the highest order — and buckets of courage.

5 Replies to “Our Regressive Progressives”