The only thing that bothers me more than seeing Muslim women being treated as second class citizens is ignorant Christians being utterly clueless when it comes to head coverings. I have written on this matter before but it seems I have to keep writing on this, as rather uninformed and biblically illiterate Christians keep trying to tell me that the two are identical and think it’s no big deal.

Talk about facepalm moments. I really tire of the inability of those who call themselves Christians to actually think clearly for a change instead of just parroting the world’s wisdom on such issues. But with yet more clueless wonders pushing this silliness, I guess I have to once again write on this – hopefully for the last time.

The latest reason why some of these undiscerning folks are pushing this nonsense has to do with the Christchurch massacre. Not only has the Prime Minister Jacinda Ardern spent much of her time of late “identifying” with the Muslim community there (which comprises a mere one percent of the entire population) by wearing head coverings, but all sorts of others have gotten into the act as well. 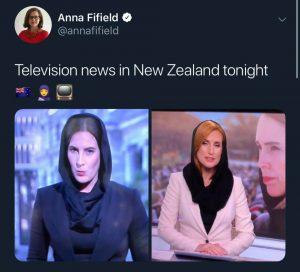 In one of the most incredible displays of dhimmitude and cluelessness thus far, last night on various NZ television news programs a number of the female newsreaders actually wore head coverings to show some solidarity with the victims and their loved ones.

I have written about similar acts of dhimmitude before. One had to do with a female professor at a leading American evangelical college. She actually wore a head covering in class and to church to show support for Muslims. As I said back then:

Spare us this “embodied solidarity” silliness. She really wants to wear a hijab to identify with and show solidarity to Muslim women? A symbol of oppression, misogyny, and second class citizenship? Get real Hawkins. Any genuine Christian would want to see Muslim women liberated and emancipated from their enslavement, not stand with them and celebrate their wretched condition.
billmuehlenberg.com/2015/12/14/20417/

In another piece I penned on this, “Islam, the Hijab, and Clueless Westerners,” I quoted Muslim Ayaan Hirsi Ali:

Islam dictates that a man must command obedience from his women, from his wives and daughters and they must submit to him…This belief is part of a larger one – that individuals don’t matter, that their choices and desires are meaningless, particularly if the individuals are women. This sense of honor and male entitlement drastically restricts women’s choices. A whole culture and its religion weigh down every Muslim but the heaviest weight falls disproportionately on women’s shoulders…The Muslim veil, the different sorts of masks and beaks and burkas are all gradations of mental slavery…The veil deliberately marks women as private and restricted property, non-persons…It restrains them, confines them, grooms them for docility. A mind can be as cramped as a body can be.
billmuehlenberg.com/2016/01/01/20532/

That Western women who fought so long and hard for their own liberation would now willingly put themselves back under the yoke of oppression and second-class citizenship utterly boggles my mind. Has feminism gone full circle now, with voluntary submission to the most patriarchal and misogynist religion ever?

But here the main issue is whether Christian women who might wear a head covering are in some ways identical to their Muslim counterparts. Are these two things morally equivalent? Sadly, some clueless Christians seem to think so. Let me try to explain the very real differences.

The New Testament does not speak a whole lot to this issue, but we have one passage that must be considered in this regard. In 1 Corinthians 11:1-16 Paul has a lengthy discussion about women and head coverings. He speaks of how men should not have their heads covered, while women should, especially during worship.

Anyone who knows the slightest bit about biblical scholarship knows that there are plenty of exegetical, hermeneutical, textual and theological questions that arise here. Indeed, there are now small libraries devoted to how exactly we understand this passage.

One of the biggest matters has to do with how much of this is cultural, pertaining to the culture of the day, and therefore not directly transferable to our own culture of today. That is, what are the biblical principles being taught here that transcend time and cultures, and which matters are specific to a certain time and place?

A look at any decent commentary will reveal what a complex, nuanced and ongoing discussion this actually is. Thomas Schreiner comments: “Paul addresses a matter of cultural importance regarding the adornment of women, and it relates particularly to issues of honour and shame which played a significant role in the Graeco-Roman world. The text before us is especially difficult because cultural practices and theological matters collide.”

N. T. Wright looks at many possible interpretative options here and then says: “That’s a lot of ‘perhaps’es. We can only guess at the dynamics of the situation – which is of course what historians always do. It’s just that here we are feeling our way in the dark more than usual.” Or as Gordon Fee reminds us, “this passage is full of notorious exegetical difficulties.”

Craig Blomberg puts it this way: “This passage is probably the most complex, controversial, and opaque of any text of comparable length in the New Testament. A survey of the history of interpretation reveals how many different exegetical options there are for a myriad of questions and should inspire a fair measure of tentativeness on the part of the interpreter.”

As to the actual practice of female head covering, Anthony Thiselton reminds us, “In Roman society the wearing of hoods (or veils, or some parallel symbolic expression) marked a married woman as both ‘respectable’ and deserving of respect.” All good commentators spend a lot of time on the historical and cultural situation back then.

Suffice it to say that there are plenty of these cultural matters which must be discussed as we try to learn what Paul is saying here. Timeless theological truths need to be separated from time-bound cultural practices and beliefs. But I have already penned an introductory piece on all this, so I ask my readers to go here: billmuehlenberg.com/2017/04/29/difficult-bible-passages-1-corinthians-112-16/

However, there are other passages we can examine which speak about the need for modesty. It should go without saying that ALL Christians – men and women – should dress modestly, but some texts do remind Christian women about the importance of all this. Peter for example reminds us that such modesty for women is as much an internal virtue as an outward action.

In 1 Peter 3:3-4 we find these words: “Your beauty should not come from outward adornment, such as elaborate hairstyles and the wearing of gold jewelry or fine clothes. Rather, it should be that of your inner self, the unfading beauty of a gentle and quiet spirit, which is of great worth in God’s sight.”

Another key text here is 1 Timothy 2:1-15. Once again, proper worship is the context of the passage. Verses 9-10 say this: “I also want the women to dress modestly, with decency and propriety, adorning themselves, not with elaborate hairstyles or gold or pearls or expensive clothes, but with good deeds, appropriate for women who profess to worship God.”

Again, we see two main points being made in such passages. One, this is all about modesty, which is always a Christian virtue, and something Christian men and women both should aim for. Two, the setting for female head coverings is worship. This is NOT about how women must dress while at home or when shopping at Woolworths or when they go to work.

In sum, there is absolutely NO comparison between the two. A Christian woman may – if she so chooses – wear a scarf as part of modest dress. There is no clear imperative in this, and Christian modesty involves much more than just wearing a scarf. Indeed, modesty is as much an attitude as anything.

In Islam however the hijab, along with the burqa, etc., are very much part of how Islam regards women: as second-class citizens. Even if some Muslim women choose to wear these things, that does not change the reality: these are part of an oppressive and demeaning institution which really does dehumanise women.

Worse yet, when Western non-Muslim women, and Christian women, wear head coverings to “identify with” and show support for Muslims, they are really doing exactly what the political ideology of Islam wants: becoming dhimmis. They are becoming subservient dupes to the oppressive religion of Islam, whether they realise it or not.

In my last article I spoke of ‘creeping sharia’ in New Zealand. Perhaps ‘steamrolling sharia’ might have been a better term. Some folks there seem intent on turning the place into a Kiwi Caliphate. One person who lives there has put together a list of indicators of this which is frightening indeed, and well worth reading and sharing: www.lifesitenews.com/opinion/troubling-signs-new-zealand-shooting-is-being-used-to-turn-my-country-into-islamic-state?fbclid=IwAR2j4E1zkciOsOycyJwz3InFmU-KZUR8dozDCmR8_7GD6UPZld-4HY_JjhM

Dhimmitude is what keeps far too many people already oppressed and enslaved. We really do not need clueless wonders in the West to add to this. And that includes clueless Christians.