If you are reading this article – or this website – you are doing well. I really do not believe both will be around a whole lot longer – not the way the crackdown on free speech is going. Throughout the West the forces of intolerance and bigotry – yes, the secular left – are doing all they can to stamp out all points of view but their own.

And leading the way here is how the left is seeking to make all criticism of Islam illegal. Demands have been made for decades now that all criticism and critical assessment of Islam become verboten, and after Christchurch this is ramping up even further. 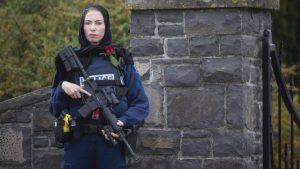 The Islamic war on freedom, free speech and the West – aided and abetted by the left – is now moving along very nicely, and anyone with eyes wide open has good reason to be very concerned. Daily now we see moves to restrict our freedoms and constrain free speech.

A few recent examples can be noted here. Recently in the UK an African street preacher was arrested for simply proclaiming the gospel in public. As I wrote on February 28, “A black street pastor, believed to be a Nigerian man, was arrested in London on 23 February apparently for an alleged ‘breach of the peace’ as he preached the Gospel outside Southgate Underground Station.”
billmuehlenberg.com/2019/02/28/how-the-west-was-won-and-lost/

When the Muslim mayor of London, Sadiq Khan, was asked about this worrying case involving Oluwole Ilesanmi, he could not give a straight answer, but mumbled about the importance of free speech. When asked if street preachers could freely read from the Bible on the streets of London, he simply said that he had not read all of it. Andrea Williams, head of the Christian Legal Centre, said this about the case:

Street preaching in the UK has a long, storied history. Open air preaching is the only way to guarantee that all the public is given the opportunity to respond to the love of Jesus Christ. But despite laws that theoretically support the freedom to preach in public, in practice, police officers are quick to silence preachers after any suggestion (often false) of Islamophobia or homophobia. This is not only unjust, but chills free speech through self-censorship. We want to see police officers protect the freedom of street preachers by only using their powers when truly necessary.
www1.cbn.com/cbnnews/cwn/2019/march/british-police-finally-admit-driving-street-preacher-out-of-london-neighborhood-to-silence-him

But let’s look further at the fallout from the Christchurch shooting. I have already mentioned some of them, including how one New Zealand book chain has pulled the best-selling book 12 Rules for Life by Jordan Peterson simply because he dared to pose with some fan who had a t-shirt on which was critical of Islam.

A private business is free to do what it wants I suppose, but the rank hypocrisy here is sickening. As has been pointed out, while Whitcoulls has ditched Peterson’s book – which has sold millions of copies and helped so many people – it is still happily selling Hitler’s Mein Kampf!

Consider also some political fallout from this. On Tuesday March 19 Islamic prayers were heard in the New Zealand Parliament in a further “show of solidarity.” Um, whatever happened to the separation of mosque and state? Recall that over a year ago New Zealand dumped any mention of Jesus in its parliamentary prayer. As one report said at the time:

Mentions of Jesus and the Queen have been removed from Parliament’s Te reo karakia, or prayer. A consultation period for the new karakia isn’t over yet but the Speaker of the House, Trevor Mallard, has already adopted it, RNZ reports. That’s been causing concern amongst some in opposition, but Mallard says he’ll consider any feedback before a final decision is made.
www.stuff.co.nz/national/politics/98742522/parliament-prayer-changes–no-more-queen-or-jesus

And on Friday Muslim prayers were broadcast around the nation with full, official government support and backing. Not only that but many schools were strongly encouraging their female students to wear a hijab in support. But I thought education in NZ was supposed to be secular?

Many are now wondering if the aim here is the eventual Islamisation of New Zealand. If so, not bad, considering only one per cent of its population is Muslim. While Christians make up around half of New Zealand’s population, it seems they have nowhere near such influence. Are we soon to witness the establishment of a Kiwi Caliphate?

And recall that the previous Friday various newsreaders for the evening news in New Zealand had donned the hijab for yet more ‘solidarity’ and ‘identification’ with the Muslim community. Wow. Talk about falling over themselves in an attempt to appease Muslims while effectively slapping the faces of those in the Christian community and other faith-based or even non-faith-based groups in NZ.

And even more frightening was this recent headline: “Hijab wearing police officer’s photo makes powerful statement in wake of Christchurch mosque shootings”. I offer the photo of this above.
www.stuff.co.nz/national/christchurch-shooting/111491996/hijab-wearing-police-officers-photo-makes-powerful-statement-in-wake-of-christchurch-mosque-shootings

So we now have the leader of the country, schools, the media, and the police – and who knows who else? – wilfully succumbing to dhimmitude as they seek the favour of Muslims. That is a real worry. While these clueless wonders and dhimmi dupes are donning the hijab all over the West, in Iran we have a different story: “Iranian Attorney Sentenced to 38 Years, 148 Lashes for Defending Women Who Removed Their Head Scarves”.
www.christianheadlines.com/contributors/scott-slayton/iranian-attorney-sentenced-to-38-years-148-lashes-for-defending-women-who-removed-their-head-scarves.html

And the NZ shooting is also having quite an impact overseas. Consider a case in Canada where an atheist – not a Christian – who happens to be an ex-Muslim, has had his speech cancelled because of the NZ shooting:

An ex-Muslim who is now an atheist and secular activist says Mount Royal University is overreacting by canceling his talk that was planned on campus for Thursday. Armin Navabi, who lives in British Columbia, was being brought in by the Atheist Society of Calgary to share his journey and discuss the reasons he doesn’t believe the Islamic faith can be reformed. But now he says he’s disappointed he won’t get a chance to engage in some passionate discussions with staff and students, including those who still practice Islam, because of MRU’s last-minute decision.

“What do they want? Do you want to have less conversation? Isn’t less conversation exactly what leads to people having extreme radical positions,” said Navabi. “I mean the less words exchanged between us, the more fists and bullets are going to exchange between people. Having more conversations is exactly what you need in the face of some tragedy like this.”
www.cbc.ca/news/canada/calgary/mount-royal-university-armin-navabi-new-zealand-ex-muslim-atheist-speech-1.5065319

And in the US all the usual suspects, including hyper-socialist politicians, have been gushing over NZ Prime Minister Ardern and her quick move to further disarm the population. Both Bernie Sanders and Alexandria Ocasio-Cortez have sung her praises and called for America to follow suit.

But wait, there’s more. Get a load of this one: “A petition started in France is circulating online for Prime Minister Jacinda Ardern to receive the Nobel Peace Prize for her response to the shooting massacre in Christchurch.” Wow! Let’s just go all the way and proclaim her to be the Messiah!
www.stuff.co.nz/national/christchurch-shooting/111502795/international-petition-pushes-for-jacinda-ardern-to-get-the-nobel-peace-prize

Plenty more examples of leftism spiralling out of control, and the curbing of various freedoms as well as free speech could be offered here. The horrible NZ massacre – as chilling as it was – is now being used all over the world to push something Muslims have been keen to push: the end of all criticism of Islam.

Indeed, Muslims have long sought to shut down all criticism of Islam by any means possible. There are far too many examples of this to recount here. Let me just offer a few. A decade ago this was even being pushed at the UN level. The Organization of the Islamic Conference pushed U.N. Resolution 62/154, on “Combating defamation of religions.” It sought to have Islam be officially shielded from any criticism.

Countless other such calls have been made over the years. And following the Christchurch massacre we are again hearing such calls, loud and clear. Let me give just one more as an example, this time back here in Australia. As we have heard so often before, Islamic leaders are again calling for the end of critical commentary on Islam. As one report puts it:

He told SBS Arabic24 that he brought three items to the table during the meeting, including his request for the introduction of new laws which would make it an offence to discriminate against Muslims. He noted that such laws would be similar to those in place in numerous countries which protect Jews against antisemitic speech.

Section 18C of the federal Racial Discrimination Act prohibits actions, including what is widely called hate speech, that “offend, insult, humiliate or intimidate another person or group of people” based on their race. However, comments directed towards Muslims are said towards people who adhere to the Islamic faith, not at a racial group. He also asked Mr Morrison to ensure that the Christchurch attack was “documented” in a way that it would “go down in history as a terrible massacre”.
www.sbs.com.au/yourlanguage/arabic/en/article/2019/03/18/grand-mufti-calls-new-laws-protect-muslims-against-virus-racism?fbclid=IwAR1w6_nJ5Bhyy8mxwWRnaGHlRia_t5_WB8mWEdLOveJGs1tdtJySdZK0hWY

Section 18C has of course already been a disaster when it comes to free speech, and this Muslim leader wants to make it much worse. We should be getting rid of 18C altogether, not adding more to this draconian piece of Australian law. That case I have made elsewhere: billmuehlenberg.com/2014/08/07/appeasing-minority-groups-while-stifling-free-speech/

Suffice it to say that this massacre sure is having a huge spill-over effect. And the truth is, there are so many unanswered questions about the Christchurch massacre, just as there are about previous ones, especially the 2017 Las Vegas shooting. I am not a fan of conspiracy theories, but many things just do not seem to add up about so many of these attacks.

It seems to me that if I were a lefty who was desperately searching for a foolproof plan to finally silence conservatism and Christianity, further promote and elevate Islam, disarm a nation’s populace, and bring about the end of free speech and the end of the West, I could think of nothing better than these terrible massacres. They seem to be working perfectly to bring about these very aims.