The despicable hypocrisy of the secular left is never-ending:

It is a truth that we hear all the time, but it must be repeated nonetheless: if it were not for double standards the left wouldn’t have any standards at all. Hypocrisy is the name of the game for the woke left, and they don’t even try to cover it up anymore.

There is nothing logical nor reasonable about the secular left. It is fixated on something and is unable to stop: the public enemy number one always has been and always will be Christianity, and theirs is an all-out war on it. They will stop at nothing until all true believers are fully silenced.

And not just that: they will stop at nothing until all true believers change their object of worship, from the one true living God to the diabolical agenda of the secular left. Only a complete and final change of allegiance will satisfy them.

The appalling treatment of Andrew Thorburn is simply the latest case of this. And if you have no idea who he is, then you really have been living on Mars lately. This is now my fifth article on him in almost as many days. All of the Australian media has been talking about him non-stop this week, as well as many overseas media outlets.

For daring to be a biblical Christian Thorburn has been hounded out of his job. For daring to be part of a church that actually believes the Bible, and what it teaches on things like the sanctity of life and gendered-marriage between a man and a woman, he is now on the unemployed scrapheap.

Sure, abortion and homosexuality are two of the main things no one is allowed to criticise anymore, but really, it is not even so much about that. The real issue for the activist left is Christianity. That is their number one hate. And the proof of this is easy enough to come by.

Other major world religions – most notably Judaism and Islam – happen to take the same view as Christianity on major moral and cultural issues such as homosexuality. Yet when folks in the public arena who belong to these other religions take similar stands to that of Thorburn, we simply have crickets chirping. The whole world does NOT explode when a Muslim sporting figure for example also states his or her concerns about something like homosexuality.

Let me offer here two crystal clear cases of this hypocrisy in action. The first concerns an AFLW player who will NOT take part in a homosexual pride round match. Check out this news report:

The AFLW’s first-ever Muslim player, Haneen Zreika, has pulled out of the league’s pride round due to religious beliefs – the second time she has done so. The 23-year-old Greater Western Sydney Giants player will not be playing in the club’s fixture against Hawthorn on October 16 in Sydney, where the side will be wearing specially-designed pride jumpers. The round celebrates and honours the LGBTQI+ community, which is heavily interlaced with the league given the amount of gay players.

It comes after Essendon CEO Andrew Thorburn was forced to step down from his role after just one day due to his links to a controversial church that condemns homosexuality and compared abortion to the Holocaust. Islam, the second largest religion in the world, is clear in its teachings that homosexuality is a sin, and Zreika said she felt she had a ‘responsibility to represent her faith’ during pride round.

For her, this means not wearing the rainbow jersey GWS designed for the round – and she revealed she felt like an ‘outsider’ when the AFL rejected her proposal to just wear the normal strip. ‘I didn’t want to make a big deal of it, until the AFL rejected me from wearing a normal jersey. That was a shock to me,’ the speedy midfielder said in the Disney+ AFLW documentary ‘Fearless’, which was released at the start of the season.

‘I love what the AFL do and the way they include everyone, but you can’t have a round where you include people but exclude someone that it impacts their faith. I really feel like an outsider, like, “no mate, you’re not part of us”,’ Zreika said. www.dailymail.co.uk/sport/afl/article-11285113/Muslim-GWS-Giants-AFLW-star-Haneen-Zreika-sparks-controversy-pulling-pride-round.html

Hmm, so why are the AFL and Dan Andrews and all the media tarts not seeking to force HER out, publicly shame and humiliate her, and make a lesson out of her? Oh, that’s right: Islam good, Christianity evil. ‘Thou shalt not pick on Islam’. ‘Thou shalt always attack Christianity’. These are the two great commandments of the secular left.

But wait, it gets even worse. My second obvious example of these damnable double standards has to do with the 2022 FIFA World Cup to be held next month in Qatar. Now for those not in the know, Qatar is a hard-core Muslim-majority nation. And this is not just hearsay: I have actually been there and experienced this first-hand.

Consider this little bit of welcoming information that the government wants all visitors – especially those from the West – to be aware of. There are certain things you WILL not do while there – or else. That includes: 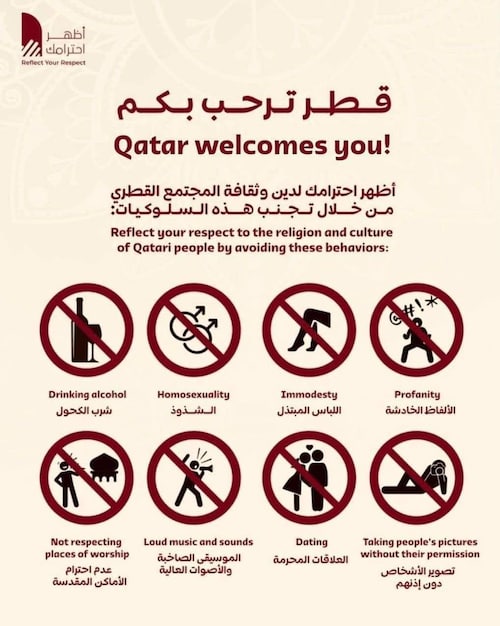 Hmm, just about everything the West champions or enjoys is prohibited in Qatar. And even as a brief visitor, if you dare to engage in any of these things, be prepared to suffer the consequences – big time. Um, so does that mean the Australian media, the AFL, politicians like Dan Andrews and all the rest have loudly and clearly voiced their strongest disapproval of all this?

So does that mean they all are insisting that we must ban people from going there and we must condemn Qatar in the strongest of terms? As it turns out, the answer to both questions is a big NO. Of course they haven’t. Offending Islam is almost as big a taboo for Western lefties as attacking Christianity is a must.

As I say, it is their hatred of Christianity that really drives the secular left. Sure, they may pay lip service to some issues in Islam, but they will never treat a Muslim like they do a Christian. We all know if Thorburn was a Muslim and not a Christian he would still be in his cushy AFL job.

But some folks might try to argue that some nations are putting up some sort of protest about Qatar and its practices and beliefs. Yes, but… Consider one article discussing what France is doing. It says that Paris and other French cities are sort of taking a stand on this. As the BBC reports:

Paris has become the latest French city to announce that it will not be setting up giant screens and fan zones for the approaching World Cup in Qatar. It cited human rights and environmental concerns in the host nation….

Like other mayors – of both left and right – she blamed concerns over workers’ rights in Qatar; the alleged high number of deaths among foreign labourers; and the environmental impact of the stadiums, all equipped with outdoor air conditioning. In Marseille, there had been plans for a giant screening if France made it to the final, but that has now been cancelled. www.bbc.com/news/world-europe-63132995

Now are foreign workers treated appalling in Qatar? Absolutely. But notice this: not one word about homosexuality! Um, does the BBC not know about how homosexuals are treated in places like Qatar? The death sentence is a main way Islamic regimes deal with homosexuals.

But oddly enough, not one word is spoken about this when these woke Western nations weakly talk about human rights violations in Qatar. Cowards. Hypocrites! While some Western leftists may not be thrilled with how homosexuals fare in Muslim-majority countries, you will almost never hear them saying a word about it.

All their venom is saved for Christians and Christianity. The Christian faith is always their main target, and they are quite happy to wink and nod at other religions and worldviews that may take similar sorts of stands on moral issues like the importance of heterosexual marriage.

What was that word again? You know, the one that starts with h’ and ends with ‘ypocrisy’?

29 Replies to “This Is About One Thing Only: Rabid Christophobia”