Having already penned six articles on the horrific Christchurch shooting and its aftermath, it still seems that even more can be said about all this. In my previous pieces I documented the very rapid and very alarming reactions and responses by the powers that be in New Zealand and the West.

I have carefully demonstrated how so many Westerners, activist Muslims, a derelict media, dhimmi dunces in the academia, and clueless political leaders have all combined to elevate Islam at all costs, while merrily whittling away at our democratic freedoms.

This has been as rapid as it has been shocking. It seems so many of these folks are falling over themselves to see who can be the most Islam-compliant, the greatest appeaser, the biggest critic of the West, and the greatest candidate of dhimmitude. It really is scary stuff indeed folks. 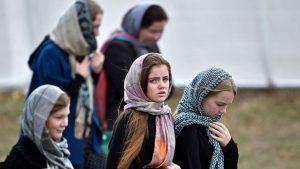 Since satire sites are making a bit of a splash of late (think of the very successful Babylon Bee site in Christian circles for example), I have decided that another way to cover all this would be for me to try my hand at some satire as well. I claim no expertise in this of course, but given how close good satire is to reality, it is worth taking a stab at.

If my previous pieces have not convinced you of the very ominous and alarming developments since Christchurch, including the scary clampdowns on our freedoms – especially free speech – perhaps a bit of satire might do the trick. (And before you get all upset, please read this article to the very end.) So here it goes:

In the not too distant future….

New Zealand Prime Minister Jacinda Ardern, who was raised a Mormon, but then became an agnostic, has now converted to Islam. Having seen all the sweetness and light that comes out of this faith, she has decided that it is the best expression there is of true peace, love, harmony and inclusion.

Here then are a number of the official duties, decisions and policies she has run with since embarking upon her exciting newfound faith journey:

-Declare New Zealand to be a Kiwi Caliphate.

-Declare Christianity to be an enemy of the people, as it is intolerant, offensive, and not in accord with Koranic truth.

-Close down all churches since they stubbornly refuse to acknowledge and venerate the Prophet (blessings be upon his name).

-Arrest all infidels who still refuse to submit to the loving and tolerant faith of Islam.

-Ban all Bibles, since they are but incomplete revelations of God, and are now outdone and superseded by the Glorious Koran.

-Order all New Zealand women to immediately quit the paid workforce and get straight back home and in the kitchen where they belong.

-Women who are raped will be accused of adultery – and that will be punishable by death.

-Women will be veiled at all times while in public, and strict enforcement of Islamic policy will apply at all times.

-As a terrific public service, all hospitals and medical centres will now provide free female genital mutilation – which of course will be required for all women.

-All churches are to be torn down, replaced by inclusive, tolerant and peaceful mosques.

-All New Zealand Christians must renounce their faith, become Muslims, be killed, or submit to the jizya.

-The official language of New Zealand will from henceforth no longer be English, but of course Arabic.

-All driver’s licenses granted to women will herewith be cancelled, annulled and destroyed. We all know women can’t and shouldn’t drive.

-All restaurants will immediately be banned from serving any dastardly haram products, including evil pork and sinful alcohol.

-All dogs will be shot on sight – those filthy, unclean animals!

-Mere head coverings (hijabs) for women will be replaced by more appropriate attire for women, the burqa (full body covering). We do not want those poor New Zealand males to be incited to lust by those inappropriately clothed women!

-All cinemas, discos, bars, theatres, concert halls, and music venues will of course be shut down at once. No more of this evil entertainment.

-It goes without saying that all homosexuals will be executed immediately. Being thrown from tall buildings will be one of the methods of execution.

-Ms Ardern will of course step down as Prime Minister since Islam does not look highly on women who have a child out of wedlock, nor on female leaders.

As I said, I make no claims to being an expert in satire. But the value of good satire of course is to highlight various realities – its value lies in “the use of humour, irony, exaggeration, or ridicule to expose and criticize people’s stupidity or vices” as one site puts it.

And in this case, the above points can be justified and defended in light of official Islamic teachings as found on the Koran, hadith and sira. The last few points can be examined a bit further. For example, female leadership does not get high marks in Islam.

The hadith of al-Bukhari for example can be appealed to here: “During the battle of Al-Jamal, Allah benefited me with a Word (I heard from the Prophet). When the Prophet heard the news that the people of the Persia had made the daughter of Khosrau their Queen (ruler), he said, ‘Never will succeed such a nation as makes a woman their ruler’.” And recall the fate of Benazir Bhutto, the female Pakistan leader who was assassinated in 2007 by a devout Muslim.

And while Muslims are quite happy to have useful idiots in power for now, as they enable the Islamisation of the West, once their power is fully consolidated, folks like Ardern will of course be the first to go. This is common practice, and as the Islamisation of New Zealand is finalised, expect to see much more of this.

I repeat – the above was satire. But sadly there is much to be concerned about in New Zealand and the West in this regard. My previous pieces have listed many of the disturbing reactions since this fateful shooting. As always, we keep in prayer those who are suffering, but we also seek to be wise and discerning as to what is going on around us.

There will be plenty of folks who will be quite critical of this piece, just as many have been critical of my earlier pieces. It goes with the territory, and critics are a dime a dozen. However, as I have often said, it is important when constructive criticism comes around to listen to it and learn from it, making any necessary adjustments along the way.

But it seems that there are two unhelpful extremes which must be avoided here. One is that of the gung-ho conspiracy theorists who find an evil enemy under every rock and a secret cabal behind every door. Yes evil people are at work, and sometimes they band together to do their thing, but I still remain cautious in this regard.

The other extreme of course is to be utterly clueless and ignorant about the reality of creeping sharia and stealth jihad. Such things do indeed exist, and we must be aware of them. Pretending no moves are under foot to implement Islam in the West is naivety in the extreme, and is part of the problem.

Again, folks may not have the deliberate aim of seeing the West become part of a global caliphate with everyone in submission to Allah, but plenty of even well-meaning people are in effect helping to bring all this about nonetheless. Just as there were countless “useful idiots” who helped make communism palatable in the West, so too here.

Ardern and others may have the best of intentions, but that alone is not sufficient. If attempts to show solidarity and identification with the Muslim community results in even more aggressive Islam in the West along with reduced freedoms, then that is something to be challenged.

And as just one more recent example of this, we now learn that in addition to banning the video of the massacre in New Zealand, they have now made it illegal to even have the killer’s “manifesto”! Consider this shocking news item:

New Zealand’s chief censor has banned mosque shooter Brenton Tarrant’s white supremacist manifesto, as well as videos of his violent rampage. The bans have ignited a debate over free speech in the grieving country. Chief censor David Shanks declared the killer’s 80-page manifesto – entitled ‘The Great Replacement’ – “objectionable” on Saturday, and ordered anyone in possession of it to destroy it. “New Zealanders can all play a part in denying those who exhort hatred, killing and terror,” Shanks said. “Do not support the murderous objectives of its author by republishing or distributing it.” Following the classification, anyone caught with the document on their computer could face between 10 and 14 years in prison.
www.rt.com/news/454640-new-zealand-free-speech-censorship/

Wow! Did you get that? Recall that Hitler’s Mein Kampf is still readily available in NZ bookstores. Why has the chief censor done nothing about that? Surely there must be plenty of other “objectionable” books waiting to be banned in NZ. As one friend rightly asked, “Could Tarrant’s manifesto be more dangerous than the Koran?”

Exactly. But if you dare to have this manifesto, you are toast. Um, I have a copy of it on my laptop. If I fly into NZ, will they seize my computer, check it out and then imprison me for 14 years? Really? Maybe what I wrote above was NOT satire after all! This is really scary stuff folks. It really is.