Although Ruth is just a short book of only four chapters, it is an important part of the Old Testament story line and deserves careful reading and study. The short and simple story of Ruth is well known. It is a tale of two women. But, as Leon Morris reminds us, it is much more:

“Most of all the book is a book about God. It deals with unimportant people and unimportant matters. But it deals with them in such a way as to show that God is active in the affairs of men. He works His purpose out and blesses them that trust him.” 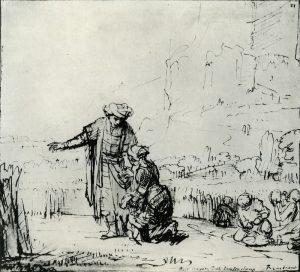 It is a very significant story indeed and a crucial part of the Old Testament. And as Luter and Davis remind us, “It is read annually by the Jewish people at the Feast of Pentecost, celebrating the harvest and first fruits (see Ruth 1:22; chap. 2-3), taking its honoured place among the Feast Scrolls in the Writings.”

The events of the book of Ruth likely take place somewhere between the death of Joshua and the rise of the monarchy. The story of Ruth seems to take place at the same time as the book of Judges: “Now it came to pass in the days when the judges ruled, that there was a famine in the land” (Ruth 1:1).

As mentioned, the book certainly is about the providence of God, and we learn that through an amazing series of events the birth of the Messiah is made possible here. When Ruth married Boaz she became a part of the lineage of Jesus himself, being the great-grandmother of King David. As we read in the New Testament, Jesus traces his ancestry back to David (Matthew 1:1-17).

As David Pawson puts it: “It is a beautiful story – a lovely rural romance. But we must ask what was God doing behind all this…. It becomes clear that God was preparing a royal line for a king of Israel. Ruth’s right choice in joining with Naomi and returning to be part of her people was part of God’s right choice, for he had chosen her to be part of the royal line.”

And let me at this point mention something important in relation to all this. The very end of the book of Ruth contains what many might find as somewhat anti-climactic: a list of names. But this is an important list indeed. I quite like what Cyril Barber has to say about this, so I quote him at length:

Furthermore, this brief genealogy, became part of one record (1 Chron. 2:3ff.) and then another (Matt. 1), so that we begin to glimpse God’s masterful, overarching plan for our redemption. His hand controls history; He works out His purpose in the lives of His people from one generation to the next; His plan has continuity and purpose. We may see only a little of it, and our understanding of His ways may be obscured by limitations imposed by the Fall, but these concluding verses remind us that He is over all His works. His plan cannot be thwarted—He elects to positions of honor whomsoever He will. And while we are subject to all the limitations of the flesh, He continues to deal with us in grace and offers us the promise of a future recompense if we will but obey Him. His dealings with Naomi and Ruth furnish ample proof of His kind intent toward the lowliest of His followers!

Yes that really helps to put things in perspective. It shows us that we each have a role to play, and no matter how insignificant we might appear to be, God can use us greatly for his purposes. No matter how ordinary we may seem to be, God can triumph in and through us. As David Atkinson reminds us, “The book of Ruth is a story of very ordinary people facing very ordinary events.” So be encouraged!

In his newish 300-page commentary on the book of Ruth, Daniel Block finishes by making this helpful statement: “This book and this genealogy demonstrate that in the dark days of the tribal chieftains as recounted in the book of Judges the chosen line was preserved, not by heroic exploits by deliverers or kings, but by the good hand of God, who rewards good people with a fullness beyond all imagination.”

I also like how Kenneth Way gives us an insight into what this book is all about, especially in relation to the biblical book which precedes it:

The book of Ruth presents the inspiring journey of God’s people from tragedy to triumph. The story is a mirror opposite of Israel’s depressing journey from triumph to tragedy that is presented in the book of Judges. While Judges is about breaking covenant and leaving torah, Ruth is about keeping covenant and living torah. While Judges emphasizes Canaanization and curse, Ruth emphasizes sanctification and blessing. While Judges documents acts of self-interest, Ruth documents acts of self-sacrifice. While Judges finally depicts the lack of kingship, Ruth finally depicts the line of kingship. Indeed, the story of Ruth teaches powerfully by means of luminous contrasts with the dark period of the judges.

Or as Fee and Stuart briefly put it, “What a relief to find Ruth after Judges! Indeed, here in bold relief is another story from the same period, about one good man and two good women, not to mention a whole community, who are portrayed as faithful to the covenant.”

Murray Gow offers us these “theological aspects of Ruth”: prayer and blessing; providence; reversal motif; conversion/inclusion; kindness (khesed); and Davidic messianic role. He offers one more, the place of women: “Ruth’s story is unique among ancient literature in celebrating female friendship. The power of the story lies largely in the hands of female characters. . . . The story of Ruth is a reminder of how much women with chutzpah can achieve in a society that restricts their roles.”

One very important theological concept found in this book which takes us straight to the heart of the Christian gospel is the concept of the “kinsman-redeemer”. This is the role Boaz plays in relation to Ruth. Mosaic law had made provision for this.

So we see Boaz doing exactly this with Ruth. And all this points to something far greater. Jesus Christ of course bought our freedom by paying the ultimate price for our redemption. He is the ultimate kinsman-redeemer. As puts Stephanie Van Eyk it:

As a redeemer, Boaz not only takes Ruth as a wife, but he also fulfills the levirate law by producing a son to carry on Elimelek’s family line. We see Ruth’s need fulfilled in Ruth 4:13, which reads, “So Boaz took Ruth, and she became his wife. And he went in to her, and the Lord gave her conception, and she bore a son.” But, this wasn’t merely a son. This was a special son who would preserve the royal line from which not only the great king David would descend through, but most importantly through whom would descend the greatest king—King Jesus! This is why the language of Isaiah 9 that Handel so brilliantly expressed in the Messiah joyfully anticipates the birth of a son. A son who would be named Jesus, “for he will save his people from their sins” (Matt. 1:21). It was this son who would redeem his elect as the ultimate kinsman-redeemer. Though Boaz redeemed the line of Elimelek, Jesus would come to redeem all the people of God. It was him to whom Boaz’s position pointed to, for in the person and work of Christ was found the true definition of kinsman-redeemer.
www.ligonier.org/blog/ultimate-kinsman-redeemer/

Arnold and Beyer offer this concise outline of the book:

Expository and devotional commentaries include:

And one theological study: