I was previously quite cautious about Trump, but I am more supportive now. What changed?

And of course my many enemies have for a while now been running with the baloney that I am some sort of hypocrite or worse, given my previous concerns about Trump. Moreover, some who are on side are also still angry with me. Well, I will never be able to please my many critics – be they onside or not. 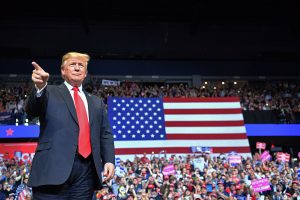 But let me explain things for the sake of other readers here. Am I being inconsistent in my political views? Am I full of double standards? Am I just going with whatever political winds are blowing at the moment? I do not think so, and here is why:

Did I have very real concerns about Trump four years ago? I sure did, and for very good reasons. I and so many other Christians and conservatives had to assess the man as he was at the time, and as he had been. And for millions of us it seemed pretty clear back then that he was not a consistent, constitutional conservative.

Indeed, for much of his life he was not even a Republican. He supported the Democrats, he hobnobbed with the Clintons, he supported various liberal causes, his life was hardly an endorsement of biblical values, and he seemed to be a very poor choice – certainly before the nomination – when we had real deal conservatives and Christians such as Ted Cruz putting their hands up for the top job.

So those of us who were committed Christians and conservatives had every reason back then to be very concerned indeed about Trump being the one we had to run with. Sure, we all knew that Hilary Clinton would be an utter disaster, but we had plenty of legitimate concerns about how Trump would fare.

And for daring to very publicly and persistently express my concerns both before and shortly after the 2016 presidential election, I went through a rather hellish time indeed. So many people were utterly incensed at me and made it clear that I was a traitor or worse.

Sadly I did lose plenty of friends back then. Many conservatives and Christians unfriended me on the social media, and I had to unfriend a few as well. It was a rather dark time, and I did not like it one bit. It is said that politics and religion are things we are not supposed to bring up in polite society – I can see why!

But the bottom line is this: I was never a never Trumper. I simply had plenty of very legitimate concerns about running with the guy. So what has changed since then? Well, quite a bit. First of all, we have now some three years by which to assess how he has performed as POTUS.

In many ways he has done much better than I and many others had expected. We can of course look at all the very impressive economic figures which are important to a nation. And almost all of this has been very good. Low unemployment rates, jobs growth, various trade deals and the like have all indeed made America greater again.

But of course conservative and Christians look not just at economic indicators when assessing the wellbeing of a nation. We are especially concerned about moral and cultural issues. Thus to see some solid conservative Supreme Court justices appointed is but one key indicator.

And Trump has been especially quite good on the prolife issues which is also a hugely important matter. A prolife president is vital, and as I have written of late, Trump has been getting better and better in this regard, including being the first US President to speak at the annual March for Life in Washington DC. See my write-up of his speech and his other actions of last month: billmuehlenberg.com/2020/01/25/america-trump-and-abortion/

But sadly he has been much more of a mixed bag on issues relating to homosexuality, which is another quite important matter. He has done and said some good things in this regard, but he has also done and said some unhelpful things. We would like a more consistent stance here, but compared to what Hillary would have been doing if she had been elected, it is certainly an improvement.

Other matters could be mentioned, but the truth is, he has done much better in many respects than what I and so many others thought possible. That is good news indeed. And much of this would be because of the fact that he has surrounded himself with many good conservatives and many good Christians. That has certainly gotta help.

Whether or not he is now a true, born-again Christian is still unclear. We can pray that he does indeed become one if he has not yet made such a decision. But even if he is not a committed Christian, he has done much good for the nation, and for the world. I am glad he is there.

As but one example, just today on the social media I had a run-in with a guy who made it clear that I was now part of the Antichrist’s cheer squad because I favour Trump for 2020. In part he said this: “Trump has the spirit of Antichrist. No true christian could support such a man that speaks words of such wickedness.”

I said this in response: “To favour Trump over the diabolical Democrat rivals is NOT to say Trump is right in everything he says or does. It is to say the real spirit of Antichrist is with the pro-death Democrats. And I happen to be a true Christian, and I support him over the alternatives. So if you think I and millions of other true Christians are the antichrist because of our views, you may want to take it elsewhere thanks.

He then claimed that I did not read what he said, to which I replied, “Mate I did read your words. You said ‘No true Christian could support such a man’. I am a true Christian and I support him over the alternatives. So I will say it one last time: if you believe I am not a Christian then take it elsewhere thanks.”

He kept on arguing so I finally had to let him go. And more of this is happening of late. So there will be more skirmishes with some of these folks. Oh dear, you just can’t win. But given that the post where this particular heated exchange took place featured a new article that I was drawing people’s attention to, let me speak to it a bit more. Shane Idleman said this in his article:

God doesn’t judge a nation based on the character of one man; He judges it based on the spiritual health of her people. Never forget that….

Again, we are not voting for people based on how godly they are; we are voting for the future direction of America: the right to life, the elevation of God’s Word back to its proper place, the appointment of conservative judges, securing America and her borders, creating jobs, and improving the quality of life for all Americans.

As a personal observation, I have noticed that those who oppose President Trump typically embrace liberal theology. It makes one wonder what is truly leading them: worldly mandates or biblical principles.

I will close with what I stated in a brief op-ed: We can’t have our cake and eat it too — there is no middle ground for Christians today. You can choose a president who will wear a Planned Parenthood scarf at her inauguration or one of the countless others who would seek to destroy the America we know and lead us down the primrose path of socialism — or worse. Or you can choose to back President Trump. There is no Plan B. stream.org/how-can-you-follow-jesus-and-support-donald-trump/

Or as Robert A. J. Gagnon recently put it in a social media post:

I don’t know a single evangelical Trump voter who is voting for Trump because of his ethical failings. Evangelicals are voting for Trump rather because of policies that are far superior to Democratic policies as regards the sea-change issues of “LGBTQ” coercion, abortion, judicial philosophy and appointments, free speech, and the free exercise of religion. In that, they are right. Since their vote for Trump is for his genuinely good policies (relatively speaking) in spite of (and not because of) any personal moral failings on his part, there can be no legitimate entertainment of claims that evangelicals are violating Christian principles and destroying Christian testimony. Indeed, that charge is more easily made, I think, of those who are doing little to stop the far greater moral harm arising out of a Democrat in the White House.

In sum, things can change. Trump has changed in some significant ways over recent years. And I hope he changes even further in some areas. My conservative and Christian principles have not changed, but how they apply to new and different political realities can and do change. Given that Trump will of course be the only Republican choice, and given the current diabolical crop of Democrat contenders, we now have no other choice.

An imperfect and still developing Trump is our only real option in this coming election. In a fallen world we are always faced with a number of less than ideal choices – but clearly some choices are better than others.