Trump’s State of the Union address was a very important speech indeed:

Donald Trump has just finished giving his 3rd annual State of the Union speech. The 80-minute address was a powerful performance, with plenty of standing ovations along the way. Many have already said that it was among the best of such recent speeches.

Of course the left is already hyperventilating over it, and the lamestream media coverage of it is not worth paying any attention to. The best thing I can do is ask you to watch and listen to it for yourself, or to read it for yourself. As to the former, you can use this link: www.youtube.com/watch?v=VcIG28lb8rA

As to the latter, use this one: www.motherjones.com/politics/2020/02/read-the-full-transcript-of-donald-trumps-state-of-the-union-address/ 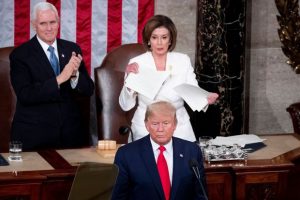 But let me say a few things about the talk before offering a number of quotes from it. Perhaps a major highlight was watching Democrat and Speaker of the House Nancy Pelosi squirming in her seat throughout the entire time, looking as if she was about to explode. That alone made the long speech well worth watching.

What we have here is the perfect embodiment of the lunar left: a narcissistic, petulant, self-obsessed, hate-filled, irrational and emotive cry-baby who is incapable of dealing with adults and adult matters. Go back to the corner of the classroom Nancy. You are a shame and a disgrace.

But since the mainstream media will ignore the actual content of this speech, let me offer a few of its many highlights. He began with these words:

Three years ago, we launched the great American comeback. Tonight, I stand before you to share the incredible results. Jobs are booming, incomes are soaring, poverty is plummeting, crime is falling, confidence is surging, and our country is thriving and highly respected again! America’s enemies are on the run, America’s fortunes are on the rise, and America’s future is blazing bright.

The years of economic decay are over. The days of our country being used, taken advantage of, and even scorned by other nations are long behind us. Gone too are the broken promises, jobless recoveries, tired platitudes, and constant excuses for the depletion of American wealth, power, and prestige.

In just 3 short years, we have shattered the mentality of American decline, and we have rejected the downsizing of America’s destiny. We are moving forward at a pace that was unimaginable just a short time ago, and we are never going back!

I am thrilled to report to you tonight that our economy is the best it has ever been. Our military is completely rebuilt, with its power being unmatched anywhere in the world — and it is not even close. Our borders are secure. Our families are flourishing. Our values are renewed. Our pride is restored. And for all these reasons, I say to the people of our great country, and to the Members of Congress before me: The State of our Union is stronger than ever before!

The vision I will lay out this evening demonstrates how we are building the world’s most prosperous and inclusive society — one where every citizen can join in America’s unparalleled success, and where every community can take part in America’s extraordinary rise.

He listed a number of amazing achievements of his short time in office, including:

Since my election, we have created 7 million new jobs — 5 million more than Government experts projected during the previous administration.

The unemployment rate is the lowest in over half a century.

Incredibly, the average unemployment rate under my Administration is lower than any administration in the history of our country. If we had not reversed the failed economic policies of the previous administration, the world would not now be witness to America’s great economic success.

African-American poverty has declined to the lowest rate ever recorded.

The unemployment rate for women reached the lowest level in almost 70 years — and last year, women filled 72 percent of all new jobs added.

The veterans’ unemployment rate dropped to a record low.

The unemployment rate for disabled Americans has reached an all-time low.

A record number of young Americans are now employed.

Since my election, the net worth of the bottom half of wage-earners has increased by 47 percent — 3 times faster than the increase for the top 1 percent. After decades of flat and falling incomes, wages are rising fast — and, wonderfully, they are rising fastest for low-income workers, who have seen a 16 percent pay-increase since my election. This is a blue collar boom.

Real median household income is now at the highest level ever recorded!

Since my election, United States stock markets have soared 70 percent, adding more than $12 trillion to our Nation’s wealth, transcending anything anyone believed was possible — this, as other countries are not doing well. Consumer confidence has reached amazing new heights.

One very moving moment in his speech involved official recognition of one of America’s most important conservative commentators, Rush Limbaugh, who is now struggling with advanced lung cancer:

Almost every American family knows the pain when a loved one is diagnosed with a serious illness. Here tonight is a special man, someone beloved by millions of Americans who just received a Stage 4 advanced cancer diagnosis. This is not good news, but what is good news is that he is the greatest fighter and winner that you will ever meet. Rush Limbaugh: Thank you for your decades of tireless devotion to our country. Rush, in recognition of all that you have done for our Nation, the millions of people a day that you speak to and inspire, and all of the incredible work that you have done for charity, I am proud to announce tonight that you will be receiving our country’s highest civilian honor, the Presidential Medal of Freedom. I will now ask the First Lady of the United States to please stand and present you with the honor. Rush, Kathryn, congratulations!

An equally moving and vitally important component of his speech involved his ongoing work on behalf of the unborn:

As we pray for all who are sick, we know that America is constantly achieving new medical breakthroughs. In 2017, doctors at St. Luke’s hospital in Kansas City delivered one of the earliest premature babies ever to survive. Born at just 21 weeks and 6 days, and weighing less than a pound, Ellie Schneider was born a fighter. Through the skill of her doctors — and the prayers of her parents — little Ellie kept on winning the battle for life. Today, Ellie is a strong, healthy 2-year-old girl sitting with her amazing mother Robin in the gallery. Ellie and Robin: We are so glad you are here.

Ellie reminds us that every child is a miracle of life. Thanks to modern medical wonders, 50 percent of very premature babies delivered at the hospital where Ellie was born now survive. Our goal should be to ensure that every baby has the best chance to thrive and grow just like Ellie. That is why I am asking the Congress to provide an additional $50 million to fund neo-natal research for America’s youngest patients. That is also why I am calling upon the Members of Congress here tonight to pass legislation finally banning the late-term abortion of babies.

Whether we are Republican, Democrat, or Independent, surely we must all agree that every human life is a sacred gift from God!

The President finished with these words:

As the world bears witness tonight, America is a land of heroes. This is the place where greatness is born, where destinies are forged, and where legends come to life. This is the home of Thomas Edison and Teddy Roosevelt, of many great Generals, including Washington, Pershing, Patton, and MacArthur. This is the home of Abraham Lincoln, Frederick Douglass, Amelia Earhart, Harriet Tubman, the Wright Brothers, Neil Armstrong, and so many more. This is the country where children learn names like Wyatt Earp, Davy Crockett, and Annie Oakley. This is the place where the pilgrims landed at Plymouth and where Texas patriots made their last stand at the Alamo.

The American Nation was carved out of the vast frontier by the toughest, strongest, fiercest, and most determined men and women ever to walk the face of the Earth. Our ancestors braved the unknown; tamed the wilderness; settled the Wild West; lifted millions from poverty, disease, and hunger; vanquished tyranny and fascism; ushered the world to new heights of science and medicine; laid down the railroads, dug out canals, raised up the skyscrapers — and, ladies and gentlemen, our ancestors built the most exceptional Republic ever to exist in all of human history. And we are making it greater than ever before!

This is our glorious and magnificent inheritance.

We are Americans. We are the pioneers. We are the pathfinders. We settled the new world, we built the modern world, and we changed history forever by embracing the eternal truth that everyone is made equal by the hand of Almighty God.

Much more could be said about this very significant speech. But it makes clear once again, in the face of the diabolically loony and leftist nature of the current-day Democrats, why Trump is our only option for the 2020 presidential election.

15 Replies to “Trump, SOTU, Pelosi and the Left”