Pelosi’s outlandish temper tantrum fully illustrates where the US Dems are at:

I could just as easily have called this piece, “Hotheads, Handshakes, and Hypocrisy”. It would have been equally accurate and relevant. All up, it has been a very good week for the President, and a very bad week indeed for Nancy Pelosi and the Democrats. President Trump has just been acquitted in the farcical impeachment trial. It was a partisan effort (except for the split vote from the RINO Romney).

I already have written about Trump’s appearance at the March for Life and his exceptional State of the Union Address. And his approval rating has just hit a new high with the American people. Now with this final acquittal, he can get on with the job of making America great again while the sourpuss Democrats stew in their own juices. 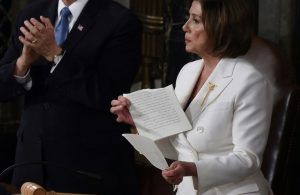 What a dismal and derelict bunch they have been – certainly over the past few weeks, but also for the entire three years since Trump has been in power. Like a bunch of spoiled brat children who did not get their way, they are still whining about not winning the 2016 election.

Instead of agreeing with the American people and their decision at the last election, they have been hating on Trump and on Americans ever since, acting like deranged toddlers who can’t get their own way. What an absolutely pathetic and despicable bunch they are.

And of course the high point – or really, low point – of this petulance and childish behaviour was the odious display by Pelosi when she ripped up the SOTU speech after Trump had finished delivering it. What a putrid display of infantile and demented behaviour. As I said in my piece yesterday:

“What we have here is the perfect embodiment of the lunar left: a narcissistic, petulant, self-obsessed, hate-filled, irrational and emotive cry-baby who is incapable of dealing with adults and adult matters. Go back to the corner of the classroom Nancy. You are a shame and a disgrace.”

Of course the demented left fully sought to defend this behaviour, as did many from the religious left. They had next to nothing to go on, but they scraped the bottom of the barrel and said her actions were justified because of an apparent non-handshake from Trump.

I do not usually pen entire articles about handshakes, but a few things can be said here. Simply viewing the video when Trump climbed to the podium makes clear what was happening. Trump had just handed Pelosi a copy of his speech. See for yourself on this video starting at the 25:20 mark: www.youtube.com/watch?v=VcIG28lb8rA

Trump gave her the speech with his right hand, and then turned to address the joint sitting of Congress. Whether he even saw her extended hand is not at all clear. And guess what: he also handed a copy of his talk to Pence, and he did not shake his hand either!

So was Trump snubbing Pence? Was Trump showing disrespect for the VPOTUS? Was Trump being petty and mean-spirited by refusing to extend his hand to Pence? The whole thing is a joke really. But a few more things can be said about this sorry episode by Pelosi.

The simple truth is this: Pelosi and the Dems have worked overtime for three years to destroy the democratically elected President, shred the Constitution, and seek to steal power to implement their clearly diabolical antichrist agenda, yet some folks are bothered about a lousy handshake – or lack thereof.

It was a terrific, powerful and moving SOTU address and it was all about a new, vibrant and resurgent America, yet all that the Dems and lefties could do was sit there and refuse to acknowledge anything of value. Instead they just whined about an apparent missing handshake! Good grief, what losers!

And when Pelosi ripped up this official government copy of this historic document, she sure showed her true colours. She might as well have ripped up the US Constitution. She was certainly spitting in the faces of all those champion Americans who were featured in the speech and highlighted by Trump.

She was showing her hatred and disdain for the mourning families of Kayla Mueller and Rocky Jones; for Charles McGee, one of the last surviving Tuskegee Airmen; for premature baby Ellie Schneider who survived birth at 21 weeks; and for single parent Stephanie Davis and her fourth grade daughter Janiyah getting the opportunity to go to the school of her choice.

All these people and the others singled out by President Trump in his address were effectively spat on by Pelosi, and their stories were deemed to be just so much utter crap by this embittered and twisted woman. Indeed, what a vile and despicable person she is. She should be ashamed of herself, and she should offer an apology not only to these people, but to the entire American nation.

And then there is the question of whether she committed an offence by wilfully destroying such a document. Even if not, it was a dastardly, unpatriotic and incredibly juvenile thing to do. Newt Gingrich was quite right to tweet this about the ugly episode:

“As Speaker of the House for four State of the Unions by a President of the other party I am disgusted and insulted by the viciously partisan action of Nancy Pelosi tearing up the speech. She isn’t clever or cute. Her childishness insults our American traditions – she should be censured.”

A writer for the Washington Times, Cheryl Chumley, said this about the action: “Make no mistake about it. Pelosi’s performance wasn’t aimed just at the president. It was a show of disdain for all the president’s supporters — for all of patriotic America. For all the deplorables out there she hasn’t been able to control and conquer. This is a woman who’s done nothing but divide to conquer since Trump took over the White House.”

Or as White House counselor Kellyanne Conway put it: “America saw an incorrigible child ripping up the State of the Union. I think it shows you how petty and peevish and partisan the Democratic Party has become.” Yep, forget about Jack the Ripper, now we have Nancy the Ripper.

But of course the hothead Pelosi is simply reflecting the current state of the US Democratic Party. For the most part they are hard-left haters who are still carrying on about the last election. Their infantile cries about ‘he is not our president’ is just an indication of what they really think: ‘America is not our country’. One article on all this is worth quoting from at length:

It turns out that most Americans think you should stand up and clap for the good things that happen in America instead of sulk and pout on your butt like a spoiled child. C-SPAN asked people to call in and give their opinions on the SOTU. What happened after that was brilliant. “I’m a Democrat, but I no longer will vote Democrat,” said one caller. “I think it’s outrageous that they sat there when all these good things are happening to our country and how much we love our country. And they looked like they hated our country…It’s outrageous and I will never vote Democrat again.” She went on to say that all her family voted for Hillary last time but this time they will never vote for a Democrat again.

But she wasn’t the only one. A man called in and said, “Let me put it this way, I’ve been a Democrat for 70-some years and what I saw tonight was appalling to me…it was very disrespectful to this president and I didn’t vote for him…but that man is the president and we should respect him.” He continued, “What I’ve seen tonight of the Democrat party, I am changing my mind…I’ll probably stay home. I’m embarrassed being a God-danged Democrat for what they did in the House today.” Then he had me rolling on the floor with this. “They looked like a bunch of dadgum idiots sitting there.” Hear, hear!

A woman from Mississippi called in to give the Democrats a piece of her mind. “I watched my president give a speech on everything great that’s happening in our country but yet, Nancy Pelosi and the others who were dressed in white, I might add, just sitting over there, never standing, never clapping for anything that might be good for the country—I don’t understand it. I used to be a Democrat, and I am no longer a Democrat.” pjmedia.com/trending/backfire-i-will-never-vote-democrat-again-say-angry-dems-on-c-span-after-pelosis-tantrum/

The demonised Dems are so out of touch with ordinary Americans that they are just digging themselves further into the grave, and Pelosi ripping up the speech was really about ripping up the chances of the Democrats to do well later this year. Indeed, come November, it could be a major wipe-out for the dastardly Dems. Let’s hope so – they certainly deserve it.