One of the clearest lessons of Scripture is how dangerous it is to go with the crowd. Remember, the crowd preferred Barabbas over Jesus. The crowd usually gets it wrong, and the Christian often must go it alone. Indeed, God often works through a remnant, a minority.

Relying on numbers, on the strength of others, may make sense to the non-believer, but it is not how Christians should operate. Ancient Israel certainly had to learn that lesson over and over again. Remember in Judges 7 how God made Gideon whittle his force of 32,000 fighting men down to just 300 to take Midian.

And we are told exactly why this was so important in Judges 7:2: “The Lord said to Gideon, ‘You have too many men. I cannot deliver Midian into their hands, or Israel would boast against me, “My own strength has saved me”.’” The glory of God must always be preeminent, and learning to trust God, not mere humans, is a perennial lesson needed to be learned by believers.

Indeed, time and time again Israel was warned about obtaining national security through making alliances with pagan rulers and nations. Consider just a few such warnings:

-Exodus 23:31-32 I will give into your hands the people who live in the land, and you will drive them out before you. Do not make a covenant with them or with their gods.
-Joshua 9:14-15 The Israelites sampled their provisions but did not inquire of the LORD. Then Joshua made a treaty of peace with them to let them live, and the leaders of the assembly ratified it by oath.
-2 Chronicles 20:35-37 Later, Jehoshaphat king of Judah made an alliance with Ahaziah king of Israel, whose ways were wicked. He agreed with him to construct a fleet of trading ships. After these were built at Ezion Geber, Eliezer son of Dodavahu of Mareshah prophesied against Jehoshaphat, saying, “Because you have made an alliance with Ahaziah, the LORD will destroy what you have made.” The ships were wrecked and were not able to set sail to trade.
-Isaiah 30:1-3 “Woe to the obstinate children,”
declares the LORD,
“to those who carry out plans that are not mine,
forming an alliance, but not by my Spirit,
heaping sin upon sin;
who go down to Egypt
without consulting me;
who look for help to Pharaoh’s protection,
to Egypt’s shade for refuge.
But Pharaoh’s protection will be to your shame,
Egypt’s shade will bring you disgrace.”
-Hosea 5:13 When Ephraim saw his sickness,
and Judah his sores,
then Ephraim turned to Assyria,
and sent to the great king for help.
But he is not able to cure you,
not able to heal your sores.
-Hosea 8:9-10 For they have gone up to Assyria
like a wild donkey wandering alone.
Ephraim has sold herself to lovers.
Although they have sold themselves among the nations,
I will now gather them together.
They will begin to waste away
under the oppression of the mighty king. 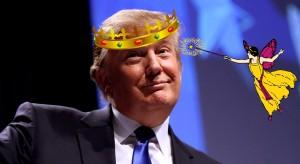 Israel was to trust God alone, not pagan military might. It seems Christians today have failed to learn these lessons. We still look to man to save us, when such hopes are in vain. In the US, millions of so-called Christians are pinning all their hopes on one man: a pagan, immoral and arrogant man no less.

Yet somehow they think God will smile on their alliance with this pagan leader. Somehow they think America can ‘become great again’ if they just give all their allegiance to King Trump. They are, as Scripture so soundly refers to them, fools.

As Psalm 20:7 puts it: “Some trust in chariots and some in horses, but we trust in the name of the LORD our God.” Trump will not save America. Indeed, there is every possibility he will make things worse – much worse. Yet millions of blind and deluded evangelicals are singing his praises, looking to him to be America’s messiah.

A brilliant article has just recently appeared on all this, and if you are a C. S. Lewis fan you will really enjoy it. Those familiar with Prince Caspian will know the story well. The Narnians are in a bad way, and a character named Nikabrik suggest that if Aslan (God) is not going to come to their rescue, then they need to make an alliance with someone else – no matter how bad. Says Gina Dalfonzo:

Nikabrik has already gone so far as to recruit a sorceress to raise the Witch from the dead. But the others are horrified – so horrified that a battle ensues, joined by the Pevensies and Trumpkin. By the time it’s over, Nikabrik and his allies are dead themselves.
How could one of the good guys in this story become corrupt enough to seek help from someone whose greed, brutality, and lust for power were legendary? As Lewis well knew, it can happen more easily and quickly than one might think. It’s been happening throughout history, ever since the first time the Israelites turned to a godless nation for help instead of trusting God to save them.
One can make a case that it’s happening right now within the conservative movement in the United States.
Which brings us back to the subject of prophetic voices. Did C. S. Lewis foresee the rise of Donald Trump? Not specifically, I’m sure. But Lewis had a remarkable understanding of human nature. He knew what it was like to feel that all hope was lost. And he knew that fear and despair can drive decent people to look for someone, anyone, who projects an appearance of strength.
Through the character of Nikabrik, Lewis explored the depths to which we can fall through fear. The first time Caspian meets Nikabrik, he is waking up after an accident and hears the dwarf’s voice near him, saying, “Kill it. . . . We can’t let it live. It would betray us.” There is absolutely no room in Nikabrik’s mind for the idea that a Telmarine could be good. And at first we can sympathize; his people have suffered greatly under the Telmarines, and he is fiercely loyal to his people – a good quality. But as Lewis frequently warned us, good qualities can be twisted and used for evil purposes.
Nikabrik’s fears are legitimate. His enemies are real and powerful and committed to the annihilation of his entire race. He is right to recognize the need for help. He is wrong to decide that help must come from a force equally merciless—wrong when he tells Caspian, “I’ll believe in anyone or anything . . . that’ll batter these cursed Telmarine barbarians to pieces or drive them out of Narnia. Anyone or anything, Aslan or the White Witch, do you understand?”
When his friend Trufflehunter reminds him that the Witch “was a worse enemy than Miraz and all his race,” Nikabrik’s retort is telling: “Not to Dwarfs, she wasn’t.” His own people and their safety are all that matter to him now. Instead of being an important priority, this has become his only priority – and any attempt to remind him that other considerations exist brings only his contempt and anger.
This is how good people with strong, ingrained values – people who have invested time and money in the sanctity of life, religious liberty, and similarly noble causes – can come to support a man who changes his convictions more often than his shirts. This is how people concerned about the dignity of the office of President end up flocking to a reality-show star who spends his days on Twitter calling people “dumb” and “loser.” This is how some who have professed faith in Jesus Christ are lured by a man who openly puts all his faith in power and money, the very things Christ warned us against prizing too highly. As one wag on Twitter pointed out, “If elected, Donald Trump will be the first US president to own a strip club,” and yet he has the support of Christians who fervently believe that this country needs to clean up its morals.
As Joseph Loconte has observed, the Narnia stories offer us “a view of the world that is both tragic and hopeful. The tragedy lies in the corruption caused by the desire for power, often disguised by appeals to religion and morals.” How dangerously easy it is for the desire for power to take on that disguise – and how easily we Christians fall for it.
Tired of waiting for Aslan – who may be nearer than we think – we turn elsewhere. It doesn’t matter if our candidate hates, bullies, and exploits other people, the reasoning goes, just as long as he’s good to us and gives us what we want. Hatred is a perfectly acceptable weapon, as long as it’s “on our side.”
So said Nikabrik as he prepared to unleash a great evil on the land of Narnia.
C. S. Lewis may have lived well before Donald Trump’s time, but he was prescient about the situation. The only fate that awaits a group that turns against its own core values for the sake of security and power is the fate of Nikabrik.

Now please, don’t get me wrong. I don’t want Clinton or Sanders to get in any more than these folks do. But I want a real conservative to get in, someone like Cruz. I can’t see how someone like Trump can save anything. He changes his tune each passing day. We have no idea what he really stands for.

Indeed, all he stands for is himself. That is not someone we need as leader of the free world. Everett Piper puts it this way:

22 Replies to “Memo to Evangelical Trumpites: Forget the Crowds and Ungodly Alliances”