So, are most Muslims moderates? Yes. So, does that let them off the hook? No. To the extent that they sit by as the Islamists kill and terrorise with impunity, they are just as guilty. When the so-called moderates effectively allow the jihadists to do their thing, then they are a part of the problem, not the solution. 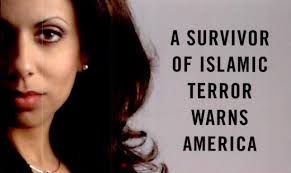 But here I want to allow two experts to speak on this. The first is Lebanese-born Brigitte Gabriel, President of Act! for America. Speaking at a Heritage Foundation event dealing with Benghazi’s unanswered questions on June 16, 2014, she gave a classic response to a question from a Muslim woman. I have shared the video of this often, but here is the actual transcript which I present in full:

Saba Ahmed: Assalam o alaikum, peace to you all. My name is Saba Ahmed; I’m a law student in American university. I am here to ask you a simple question. I know that we portrait Islam and all Muslims as bad, but there is 1.8 billion Muslim followers of Islam. We have 8 million plus Muslim Americans in this country and I don’t see them represented here, but my question is how can we fight an ideological war with weapons? How can we ever end this war? The jihadist ideology that you talk about, it’s an ideology. How can you ever win this thing if you don’t address it ideologically?

Brigitte Gabriel: Great, question. I am so glad you’re here and I am so glad you brought that up, because it gives us an opportunity to answer. What I find so amazing is since the beginning of this panel, which we are here about Benghazi attack against our people. Not one person mentioned Muslims, we are here against Islam or we’re launching war against Muslims. We are you to discuss how four Americans died and what our government is doing. We were not here to bash Muslims; you were the one who brought up the issue about most Muslims and not us. And since you brought it up, allow me to elaborate with my answer.
There are 1.2 billion Muslims in the world today. Of course, not all of them are radicals the majority of them are peaceful people. The radicals are estimated to be between 15% to 25% according to all intelligence services around the world. That leaves 75% of them peaceful people, but when you look at 15% to 25% of the world’s Muslim population; you’re looking at the 180-million to 300 million people dedicated to the destruction of Western civilization. That is as big as the United States. So why should we worry about the radical 15% to 25%? Because it is the radicals that kill, because it is the radicals that behead and massacre.
When you look throughout history, when you look at all the lessons of history most Germans were peaceful, yet the Nazis drove the agenda and as a result 60 million people died, almost 14 million in concentration camps, 6 million were Jews. The peaceful majority were irrelevant.
When you look at Russia most Russians were peaceful as well, yet the Russians were able to kill 20 million people. The peaceful majority were irrelevant. When you look at China for example most Chinese were peaceful as well, yet the Chinese were able to kill 70 million people. The peaceful majority were irrelevant.
When you look at Japan prior to World War II most Japanese were peaceful as well, yet Japan was able to butcher its way across Southeast Asia killing 12 million people mostly killed with bayonet and shovels. The peaceful majority were irrelevant.
On September 11 in the United States, we had 2.3 million Arab Muslims living in the United States. It took 19 hijackers 19 radicals to bring America down to its knees, destroy the World Trade Center, attack the Pentagon and kill almost 3,000 Americans that day. The peaceful majority were irrelevant.
So for all our powers the reasons and us talking about moderate and peaceful Muslims, I’m glad you’re here, but where are the other speaking out and since you are the only Muslim representative.
And since you are the only Muslim representative in here, you took the limelight instead of speaking about why our government and I assume are you an American? You’re an American citizen. So an American citizen, you sat in this room and instead of standing up and saying a question or asking something about our four Americans that died and what our government is doing to correct the problem. You stood there to make a point about peaceful moderate Muslims. I wish you brought 10 with you to question about what how we can hold our government responsible. It is time we take political correctness should be consigned to the garbage can where it belongs and it’s time to start calling a spade a spade.

Of course it is far better to actually watch and listen to her in action, so I urge you to view this brief video clip: www.youtube.com/watch?v=Ry3NzkAOo3s

By the way, the questioner turns out to be a real Islamic activist, not just an innocuous audience member as she tried to portray herself. See more on this here: www.frontpagemag.com/2014/deborah-weiss/saba-ahmed-unveiled/

My second witness is national security expert G. Murphy Donovan, and his brand new article, “Islamism, Islamofascism, and Islam”. He too addresses the issue of moderate Muslims, and their guilt in all this. He writes:

If only ten percent of Muslims (150 million) are militant, then the threat is substantial by any measure. Neologisms are born when ordinary language fails to capture a phenomenon or an idea. Terms like Islamism and “Islamofascism” fill a void of meaning. Yes, the majority are not terrorists. They are worse! Passive aggressors might be a better description for most of the silent Muslim majority.
How many Russians were Communists and how many Germans were Nazis in the beginning? The numbers never have to be large. Militancy and terror are usually a minority and minorities still prevail. A kinetic vanguard can always depend on the silence and apathy of majorities. The Islamist menace is no different today.
Indeed, the propagandists and the swords are the lesser of two evils. We know what they believe, what they fight for, and we see what they do on a daily basis. Militants make no secret of their Islamic motivation. Whatever the number of radicals, they will never be as numerous, or as guilty, as the larger Ummah which is routinely disingenuous, routinely apathetic, routinely absolved, routinely hypocritical, and routinely given a pass on accountability.
Most Americans and Europeans believe that most Muslims are innocents. How is this different than what most Muslims believe? Sadly, the great crimes of any century are more a function of apathy and appeasement, and less a product of militancy. Apathy and denial about the Islamism problem is as much a problem in the West as it is in the East.
A malignant force, once set in motion, tends to stay in motion unless confronted by an equal or superior force. The real strength of Islamists is the apathy of 57 Muslim nations worldwide, a sixth of the world’s population. Islamofascism is an Ummah community problem. The progressive West cannot save the Islamic East from itself.

I fully concur with both experts on this. Are there moderate Muslims? Yes, but what are they actually doing about their devout Muslim brothers and sisters, except to make excuses for them? Where are all the mass demonstrations of these moderate Muslims? I still am waiting for them.

As I have often said before, the militants and Islamists are the real deal – they are the real, devout Muslims, taking their faith seriously. The so-called moderates are nominal Muslims, who don’t really believe their own faith teachings and history.

As Donovan writes, “The necessity to distinguish militants from moderates is not trivial. The so-called moderate is the more difficult problem, numerically and ideologically.”

4 Replies to “Islamists and Their ‘Moderate’ Muslim Supporters”