I am reading the book of Exodus again and I had just gotten up to chapter twenty, where the Ten Commandments appear. I found myself stopping dead in my tracks as I read the very first one. As it says in verse three: “You shall have no other gods before me.” 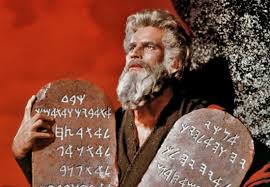 Thus this brief essay. I will draw upon – appropriately enough – the ten commentaries I have on Exodus (the Decalogue is also repeated in Deuteronomy 5, but I will just draw upon my Exodus volumes for now) and my ten books on the Ten Commandments. So permit me to quote freely from many of them.

We should begin by noting that every text has a context, and the verses before and after v. 3 should also be mentioned. Verse 2, the prologue to the Ten Commandments, says this: “I am the LORD your God, who brought you out of Egypt, out of the land of slavery”. And verse 4 offers us the second commandment, warning about idols. All these verses tie in together.

As to the foundational nature of the first commandment, Philip Graham Ryken says this: “This is the fundamental commandment, the one that comes before all the others and lays the foundation for them. Before we learn anything else about what God demands, we need to know who he is and who we are in relationship to him.”

But let me say just a quick word about other gods. Do they exist? Verses like Is. 40:12-31; 43;8-13; 44:6; and so on make it clear that there is but one God. But polytheism, a belief in many false gods, was rife back then, and still is today. As Ryken notes, “The answer is that even false gods hold a kind of spiritual power over their worshippers.”

As Victor Hamilton comments, “True, there are no other gods that have real existence, but in the world of human fantasy, there is no end to the number of gods the human mind can generate and to which humans may become devoted. What the Lord is calling for in this first commandment is an exclusive loyalty to him.”

And as Mark Rooker reminds us, the “prohibition against the worship of all but one deity was unique in religious history.” He continues, “The other nations of the world were polytheistic and thus innately tolerant of the views of others, as it was believed that no one god had absolute power and controlled all the phenomena of nature. This same tolerance that characterised pagan cultures in the biblical period is now true of much of Western culture.”

But as David Klinghoffer notes, “The problem with today’s ideal of ‘tolerance’ is that under the guise of making us better people, it robs us of the vital capacity to make moral distinctions, to discern a bad idea and call it bad.” This is certainly the curse of contemporary culture.

And of course Christians need to take with the utmost seriousness the first commandment just as much as anyone else. We are also filled with our own false gods. We too try to make God into our own image. We make him a sentimental, celestial buddy who exists simply to make us happy and grant us our every wish.

We make him into a tree-hugging hippy who wants everyone to sit around chanting ‘aum’ and just getting along with everyone. We have lost his holiness, his righteousness and his perfect purity. That is why we have such great problems with this commandment and all the others.

How can a God who loves us all unconditionally make any demands upon us? They never bother to read about the many conditions put upon his love and his mercy and his grace. As R. C. Sproul once said, “God’s grace is not infinite. God is infinite, and God is gracious. We experience the grace of an infinite God, but grace is not infinite. God sets limits to his patience and forbearance. He warns us over and over again that someday the ax will fall and His judgment will be poured out.”

But because we have abandoned the God of the Bible for one of our own vain imagination, we don’t even think in terms of God as a jealous God. But that is exactly what it says about him in the second commandment; “for I, the Lord your God, am a jealous God”.

As Klinghoffer rightly states, “The word jealous, which the Bible uses in speaking of God only when the context is idolatry, sums it all up. When there is no possessiveness, there is no love. What wife would be pleased if her husband could never be moved to jealousy, no matter how forwardly she might flirt with other men?”

A faulty idea of divine love is a result of getting the first commandment wrong. Al Mohler quotes Harry Blamires in regard to the idol of a sentimental love which we have erected around God: “A curse of contemporary Christendom has been the replacement of traditional theology by a new system which we may call Twentieth-century Sentimental Theology. Sentimental theology has invented a God: it insists that he is a God of love, and implies that it is therefore his eternal concern that a thumping good time should be had by all.” Blamires continues:

God’s love has lost its meaning in the Christian imagination because it has lost its corollary: wrath. If we begin with “God loves you and has a wonderful plan for your life,” what is the problem? From what does the unbeliever need to be saved? We have forgotten that people are condemned eternally, not primarily because they did not accept Christ, but because God did not – could not, if He remained just and holy – accept them. Unless we are clothed with Christ’s righteousness, God cannot enter into a relationship of covenant love and faithfulness with us. It is God’s problem with us, not just our problem with God, that must be faced if we are to avoid setting up an idol of love in the place of the true God.

We now worship a Sentimental God because we have lost sight of who he truly is. We even forget the setting for the giving of the Ten Commandments as found in Ex. 19:17-18: “Then Moses led the people out of the camp to meet with God, and they stood at the foot of the mountain. Mount Sinai was covered with smoke, because the LORD descended on it in fire. The smoke billowed up from it like smoke from a furnace, and the whole mountain trembled violently.”

We read more of the same just after the Ten Commandments are listed: “When the people saw the thunder and lightning and heard the trumpet and saw the mountain in smoke, they trembled with fear. They stayed at a distance.” (Ex. 20:18)

As Al Mohler rightly reminds us, “We have to read the Ten Commandments remembering the smoke upon the mountain that was shaking. We have to remember even the fear of Israel that resulted from knowing that God had spoken to them at all, much less in the form of these specific words.”

So Christian and non-Christian alike need to once again go back to the mountain. We need to read these commandments as if for the very first time – especially the first one. Christians need to repent of all the false gods and idols we have substituted for the true and living God. And non-believers need to repent of their arrogance and rebellion. As Vincent Miceli wrote in his excellent 1971 volume, The Gods of Atheism:

Moses failed to write the following commandment: “Thou shall not be an atheist.” Instead his first commandment read: “I am the Lord thy God . . . Thou shalt not have strange gods before me.” It was as if Moses had written: “Atheists are not godless men; they are men addicted to false gods.” Thus, the battle of love to which the Christian is honourably called today is the struggle to liberate his atheist neighbours from enthrallment to false gods and to help these neighbours find the True God.