It is not my desire to always point out the dangerous teachings of mega-preachers. Indeed, I take no pleasure in it. But when they keep coming out informing us just how proud they are of pushing lies and falsehoods which are sending perhaps millions of people to hell, then I have a solemn obligation under God – as does any disciple of Christ – to expose such errors and call forth repentance.

And to ward off any unnecessary criticism of this, the biblical principle is clear: private sin, private rebuke; public sin, public rebuke. If someone like Joel Osteen pastored a small church of say 75 people, and I was a member of it, and he started teaching questionable if not dangerous and false doctrines, then my responsibility would be to confront him privately and hope that he sees the error of his ways. If not, then, as according to Matthew 18, I take a brother or two with me and try again.

But as the example of Paul in 1 Corinthians and Galatians etc. makes clear, when there is public sin or public teaching of false doctrine, then public rebuke is called for. And if this was a unique or once-off issue, that would be one thing. But when he has been guilty of doing this for years and years now, then we have a repeat offender, a serial false teacher who regrettably is decei 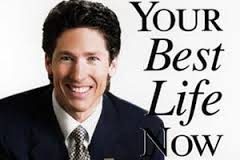 Of course with his preposterous and appalling humanistic preaching, he is an easy target. But that is not the point: if he had just those 75 members, his harmful influence would be minimal. But because he is reaching millions, and they cling to his every word, then it is incumbent upon us to point out error and admonish this leader.

In this case he seems to be quite happy in allowing Muslims, atheists and others to enter a lost eternity. Consider this worrying new revelation about how he seeks to please men and comfort sinners in their lies and lifestyles:

Evangelical Christian pastor Joel Osteen shared in an interview this week that “a whole group of probably about 50 Muslims” recently visited his nondenominational megachurch in Houston, Texas, and indicated that his inspirational messages on “how to live a great life” resonate with people “in Muslim countries.”
“I have Muslims that attend our church and my books sell a lot in Muslim countries as well,” Osteen said during an interview with Jeremy Hobson for the “Here and Now” radio program published online Monday….
He then asked Osteen if he has conversations with Muslims, which prompted the preacher to share that he “certainly” does. “You know, I don’t know, I don’t get too deep in those kinds of things,” Osteen added, “but our ministry is about reaching out to everybody, and so you know, I do have those conversations.”
“I had a whole group of probably about 50 Muslims here at the service about two weeks ago, sitting right on the front row. They came, and we have good, good relationships. And I think part of our ministry is, our main theme is Jesus says love God with all your heart and love your neighbor as you love yourself. And I don’t try to put people in a box — OK, they’re Jewish or they’re Catholic, they’re this or they’re that. I just say, ‘you know what, they’re somebody that God’s put in our path for us to love,’ and that’s our philosophy,” he added….
Osteen previously has shared that his messages are not only attractive to Muslims, but to atheists as well. In a 2014 “Larry King Now” interview, King asked the megachurch pastor, also known for his megawatt smile: “Why would an atheist be a fan?”
“I think what they like, Larry, the principles that we teach is from the Scripture but they can help anybody you know, to reach dreams or to forgive or to have a good self-image,” Osteen said. “I know that I’m not a traditional pastor in terms of I’m just going down teaching scripture by scripture, because a lot of what I would teach is just how to live a great life.”

If your message to a Muslim, an atheist, or any other sinner is simply that you can have a great life and have a good self-image, you are not preaching the gospel of Jesus Christ – not in the slightest. A sinner going to hell does not need a pep talk, a feel-good sermon, New Age mumbo jumbo, or therapeutic emotionalism.

He needs the real gospel. And that is always a hard word. Indeed, since the good news of the gospel must always be preceded by the bad news of the gospel (that we are lost rebels under the wrath of God heading to eternal judgment unless we repent), Osteen should not be seeking to make his listeners feel good in the first place.

He should be making his listeners feel bad – about their sin, about their lostness, about offending a holy and just God – and then out of that sense of despair and hopelessness, the good news side of the gospel can be proclaimed: the glorious good news of a Saviour who took our place at Calvary and offers newness of life if faith and repentance are produced.

And of course Christian discipleship is also a hard and demanding road as Jesus made so very clear time and time again. The Christian life is no bed of roses where we simply have a good time, smile a lot, and have a great life. It is about self-denial, taking up the cross, crucifying the flesh, being rejected and persecuted, and making the hard and lonely choices of Christian discipleship.

As to inviting Muslims and others in to church, and the fact that his “ministry is about reaching out to everybody,” well of course we make the gospel available to anyone. That is not the issue. But we proclaim biblical truth to them. We don’t confirm them in their sin and their lost fate.

Jesus made the gospel message available to everyone, but he never left people as they were. He demanded faith and repentance as entrance requirements into the Kingdom. He made it clear that unless one turned from their sin and embraced his Lordship, they were none of his.

So yes, anyone can come to Christ just as they are. But he loves people too much to leave them that way. A true encounter with Christ is always a life-changing encounter. You never stay the same when you truly meet Jesus. Any “gospel” that says you can stay just as you are and simply remain in your selfishness is a lie from the pit of hell.

That is a false gospel every day of the week. Satan loves it of course. It is sending countless fans of Osteen to a lost eternity. As such, it is our solemn responsibility to pray for Osteen. We need to pray that the Holy Ghost convicts him mightily of the false, men-pleasing gospel he is preaching, that he repent, and that he turn back to proclaiming the biblical gospel.

I realise of course that were he to do so, he would likely lose 95 percent or more of his local and international following. But that is OK. Better that 5 percent receive solid biblical truth and make it to heaven, than that 95 percent follow this damnable message and be sent to a lost eternity.

Right now Osteen and many of his followers are on the broad road. Pray that this changes quickly, and many start heading down the narrow road instead.