In the contemporary West the concept of absolute and universal truth has largely been abandoned, and we are now awash in a sea of relativism and subjectivism. Because of this, we have largely lost the ability to make fundamental and necessary distinctions.

Indeed, even to suggest that some things are different is to invite the wrath of the PC lobby, as they label you bigoted, intolerant and judgmental. The loss of truth is found everywhere in the West today, and we see it happening all the time, for example, with the American president.

A few days ago at the annual National Christmas Tree Lighting ceremony at the White House, Obama stated that all religions share in Christian values. He claimed that the “lessons of Jesus Christ” are “also the bedrock values of all faiths — values to be cherished and embraced not only during the holidays, but to be practiced in our daily lives.”

Um no, all religions do not share the same values and lessons. Jesus came with a unique message of being the Son of God, coming to redeem people from their sin if they repent and place their trust in him. That is most certainly not the teaching or lessons of Islam, or Buddhism, etc.

Obama’s inability to make clear differences, distinctions and delineations is of course an endemic problem in the West, and even in the churches. We have lost our ability to discern, to test, to judge, and to make basic differentiations.

And it is not much better with some recent worrying remarks by Pope Francis. Consider how he said in Africa recently that Islam and Christianity are basically part of one big happy family. He told Muslims in a mosque that “Christians and Muslims are brothers and sisters.”

Actually, no they are not. If a Muslim is my brother then Allah is my father, and conversely Jesus would be a Muslim’s brother. Muslims would kill to hear the latter, and Jesus would have a radically different take on that as well. Recall how he told those who were not of him that their father was in fact the devil (John 8:44). 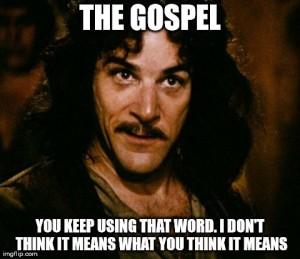 I expect better from religious leaders. But the inability to make proper differences and distinctions is all around us. However we need to do so, and it is absolutely vital for the believer. Differences matter, and if we cannot make the most basic of distinctions then we are all in really big trouble.

The Apostle Paul certainly knew this perfectly well. Having just finished reading again 2 Corinthians and Galatians, I find this made quite clear. Paul will never allow for sloppy thinking and lousy theology. Biblical distinctions are absolutely imperative to him.

Thus he warns about those who would bring a “different gospel”. Not all gospels are the same, and some come straight out of the pits of hell. Indeed, in 2 Cor. 11 Paul speaks of a “different gospel,” a “different Jesus,” and a “different spirit”. All three stand and fall together, and Paul insists that we earnestly guard against fake gospels and false Christs. Consider what Paul says in verses 3-4 of ch. 11:

I am afraid that just as Eve was deceived by the serpent’s cunning, your minds may somehow be led astray from your sincere and pure devotion to Christ. For if someone comes to you and preaches a Jesus other than the Jesus we preached, or if you receive a different spirit from the Spirit you received, or a different gospel from the one you accepted, you put up with it easily enough.

Paul reminds the Corinthians just how utterly serious this is in verses 13-15:

For such people are false apostles, deceitful workers, masquerading as apostles of Christ. And no wonder, for Satan himself masquerades as an angel of light. It is not surprising, then, if his servants also masquerade as servants of righteousness. Their end will be what their actions deserve.

Those are very strong words indeed. But he comes down just as hard on these matters in Galatians 1:6-9:

I am astonished that you are so quickly deserting the one who called you to live in the grace of Christ and are turning to a different gospel – which is really no gospel at all. Evidently some people are throwing you into confusion and are trying to pervert the gospel of Christ. But even if we or an angel from heaven should preach a gospel other than the one we preached to you, let them be under God’s curse! As we have already said, so now I say again: If anybody is preaching to you a gospel other than what you accepted, let them be under God’s curse!

Wow, Paul certainly does not mess around here – there certainly is no sugar-coating of the matter. This is serious business, and those who would bring in a different, false gospel are to be eternally condemned. I had to share this passage with one believer recently when he tried to play down the seriousness of false teaching.

No one can read Paul’s words here or elsewhere and fail to realise that false gospels are to be resisted with all of our strength – that is how damning they really are. And because the gospel is continuously being challenged with false gospels, we need to keep affirming and reaffirming the biblical gospel.

I just now went to my book shelves and pulled down a number of volumes all penned in the past five years which seek to do this very thing: proclaim afresh gospel truth. These volumes are all worth getting and digesting:

Another volume, Counterfeit Gospels by Trevin Wax (2011), is worth looking at in a bit more detail. In it he looks at a number of these false gospels which are in circulation today, and contrasts them with the biblical gospel. Let me just mention a few of them:

-The Therapeutic Gospel: It “confuses our spiritual symptoms (a troubled marriage, anxiety, anger, addictions) with our spiritual disease (sin). Because the diagnosis is superficial, the treatment is also superficial.”

-The Judgmentless Gospel: “The judgmentless gospel distorts a major part of the gospel story – the end. And if you’ve ever heard a good story, you know that once you change the ending, you alter everything. . . . Without judgment, sin becomes less serious. The implications of human rebellion are downplayed. No longer is human sin considered cosmic treason against our Creator, and the offer of forgiveness loses its power. If there is no eternal judgment, just what do we need to be saved from?”

-The Quietest Gospel: This gospel turns the good news “into a message that is only personal. The counterfeit says that the cross and resurrection of Jesus Christ no longer address the world, but only the individual.”

Of course one can think of other false gospels that are all the rage today, such as the bogus health and wealth gospel. But the point should be clear: there is always a temptation to preach a gospel which is simply a different gospel, and not the biblical gospel. When we do that, we are treading on very dangerous ground indeed.

Paul made it perfectly clear what the consequences are of watering down, distorting and substituting the biblical gospel. As J.C. Ryle once put it: “Since Satan cannot destroy the gospel, he has too often neutralized its usefulness by addition, subtraction, or substitution.” Paul took this with utmost seriousness, and so should we.

Let me conclude with several quotes by one powerful gospel preacher, Paul Washer. The first comes from The Gospel Call and True Conversion:

One of the greatest crimes committed by this present Christian generation is its neglect of the gospel, and it is from this neglect that all our other maladies spring forth. The lost world is not so much gospel hardened as it is gospel ignorant because many of those who proclaim the gospel are also ignorant of its most basic truths. The essential themes that make up the core of the gospel – the justice of God, the radical depravity of man, the blood atonement, the nature of true conversion, and the biblical basis of assurance – are absent from too many pulpits. Churches reduce the gospel message to a few creedal statements, teach that conversion is a mere human decision, and pronounce assurance of salvation over anyone who prays the sinner’s prayer.

The second is from The Gospel’s Power and Message:

Paul’s gospel not only contradicted the religion, philosophy, and culture of the day, but it declared war on them. It refused truce or treaty with the world and would settle for nothing less than culture’s absolute surrender to the Lordship of Jesus Christ. We would do well to follow Paul’s example. We must be careful to shun every temptation to conform our Gospel to the trends of the day or the desires of carnal men. We have no right to water down its offense or civilize its radical demands in order to make it more appealing to a fallen world or carnal church members.
Our churches are filled with strategies to make them more seeker-friendly by repackaging the Gospel, removing the stumbling block, and taking the edge off the blade, so that it might be more acceptable to carnal men. We ought to be seeker-friendly, but we ought to realize this – there is only One seeker and He is God. If we are striving to make our church and message accommodating, let us make them accommodating to Him. If we are striving to build a church or ministry, let us build it upon a passion to glorify God, and a desire not to offend His majesty. To the wind with what the world thinks about us. We are not to seek the honors of earth, but the honor of heaven should be our desire.

13 Replies to “Another Gospel”