Conflicts, disputes, arguments and division are a part of life, as is the need to resolve such ruptures and heal such splits. People are always getting into conflict, and there is always a need for conflict resolution. This is what it is like to live on planet earth.

If two young siblings are locked in a dispute over a toy, mother or father may step in and try to resolve the fight. They act as a mediator, seeking to achieve dispute resolution. And entire industries now exist in dealing with conflict. When a marriage goes bad, for example, the couple may go to a trained mediator to try to find some solution to the problems.

And of course workers often get into a dispute with business owners or bosses, and again there is the need for mediation to achieve some sort of reconciliation. In all these case some third party is usually called in to bring about a healing of the division or conflict.

One simple definition of all this goes as follows: “Mediation, as used in law, is a form of alternative dispute resolution (ADR), a way of resolving disputes between two or more parties with concrete effects. Typically, a third party, the mediator, assists the parties to negotiate a settlement.”

In many ways the ideal mediator is objective and neutral in a particular dispute, and seeks to fully and accurately represent both parties in the conflict. A mediator who shows partiality or bias to one of the parties will not be a helpful mediator, at least as far as the other party is concerned.

With this background in mind, let me refer to our most important conflict, and our most important need of a mediator. God and mankind, meant to exist in a close, loving relationship, have experienced a massive breakdown. Sure, the fault is all one way traffic: people have rejected God and turned against him. 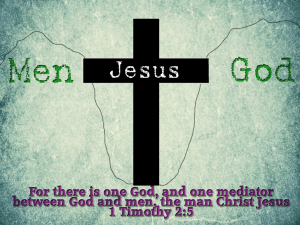 He is not a mere mortal like me that I might answer him,
that we might confront each other in court.
If only there were someone to mediate between us,
someone to bring us together,
someone to remove God’s rod from me,
so that his terror would frighten me no more.
Then I would speak up without fear of him,
but as it now stands with me, I cannot. (Job 9:32-35)

Yes, the crucial need for a mediator. Of course God could have left us in our mess, and our alienation from God would be forever irreparable. Thankfully God has not taken this route, but has instead sought reconciliation, by means of a mediator. Christ has come to bridge the gap and restore the relationship.

And this is the genius and uniqueness of Christianity. It alone offers us a mediator – a perfect mediator. Jesus Christ is the second person of the Trinity. Thus he is fully God. But at the Incarnation, he became fully man. So he is able to fully represent both parties. As Alister McGrath summarises:

The mediator must represent God to humankind, and humankind to God. He must have points of contact with both God and humanity and yet be distinguishable from them both…. In short, the central Christian idea of incarnation, which expresses the belief that Jesus is both God and man, divine and human, portrays Jesus as the perfect mediator between God and human beings. He, and he alone, is able to redeem us and to reconcile us to God.

The greatest need in the world – for man to get right with God – is resolved by God himself. All we have to do is avail ourselves of the mediator Jesus Christ and what he has done on our behalf. And all this was prefigured in the Old Testament.

Like the ancient priests of old who mediated between God and the people of Israel, Jesus Christ is now the superior priest who perfectly takes on this role. As we read in Hebrews 4:14-16, Jesus is the Great High Priest:

Therefore, since we have a great high priest who has ascended into heaven, Jesus the Son of God, let us hold firmly to the faith we profess. For we do not have a high priest who is unable to empathize with our weaknesses, but we have one who has been tempted in every way, just as we are – yet he did not sin. Let us then approach God’s throne of grace with confidence, so that we may receive mercy and find grace to help us in our time of need.

Let me look in more detail at one passage which speaks to these vitally important truths. The classic text on this, 1 Timothy 2:5, says this: “For there is one God and one mediator between God and mankind, the man Christ Jesus.” John Stott comments:

A mediator is an intermediary, the person in the middle, who effects a reconciliation between two rival parties. Mesit?s was used in the papyri both for an arbiter in legal disputes and for a negotiator of business deals. And between God and the human race, Paul writes, there is only one, Jesus ‘the only go-between’….
Here, then, is the double uniqueness of Jesus Christ, which qualifies him to be the only mediator. First there is the uniqueness of his divine-human person, and secondly the uniqueness of his substitutionary, redeeming death. The one mediator is the man Christ Jesus, who gave himself as a ransom. We must keep these three nouns together, the man, the ransom and the mediator. Historically, they refer to the three major events in his saving career, his birth by which he became man, his death in which he gave himself as a ransom, and his exaltation (by resurrection and ascension) to the Father’s right hand, where he acts as our mediator or advocate today. Theologically, they refer to the three great doctrines of salvation, namely the incarnation, the atonement and the heavenly mediation. And since in no other person but Jesus of Nazareth has God first become man (taking our humanity to himself) and then given himself as a ransom (taking our sin and guilt upon himself), therefore he is the only mediator. There is no other. No-one else possesses, or has ever possessed, the necessary qualifications to mediate between God and sinners.

Jesus Christ is the arbitrator Job was looking for. Because he is the God-man, Jesus bridges the gap between the Creator and the creature. He is fully God. Therefore, he is able to meet God’s standards. But as “the man Christ Jesus,” to quote what Paul said to Timothy, he is also fully human. Therefore, Jesus is able to meet our obligations.
The reason Jesus is the only mediator is that he is the only one who has both a divine nature and a human nature – not the angels, not Mary, or the saints, or even your favourite local minister, for none of them is divine. If we want to get to God, we have to go through this one divine person. Jesus is the mediator.
Jesus is able to represent and to reconcile both man and God because he has the most intimate sympathy with both parties. As a member of the Trinity, he has communion with the Father and the Spirit. As a member of the human race, he has union with us. Therefore, in the words of John Wesley, he is able “to reconcile man to God, and to transact the whole affair of our salvation.” As the Puritans loved to say, Jesus Christ is able to strike hands on both sides of the covenant of grace.
Here is Christianity at its narrowest, and also its widest. Christianity is a thoroughly exclusive religion: it teaches that there is only one God, one Savior, and one salvation. Yet it is also broadly inclusive. It is just because there is only one God that the unique way of salvation is open to everyone: “Our exclusive faith (there is one God, and no other) leads necessarily to our inclusive mission (the one God wants all men to be saved).”

What an incredible and totally unique faith is Christianity. It deals with all the major questions in life, and offers the best answers: Who are we? Why are we in such a predicament? How can we get out of it? The man Christ Jesus, the sole mediator between God and man, is the ultimate answer.

We must always cherish, affirm and promote this utterly core teaching of Christianity. Without the mediator Jesus, there is no Christianity. And because of this mediating role, all relationships can now be potentially restored. Let me close with the words of Dietrich Bonhoeffer from his book, The Cost of Discipleship:

[Jesus] stands between us and God, and for that very reason he stands between us and all other men and things. He is the Mediator, not only between God and man, but between man and man, between man and reality. Since the whole world was created through him and unto him (John 1:3; 1st Cor. 8:6; Heb. 1:2), he is the sole Mediator in the world…
There is no way from one person to another. However loving and sympathetic we try to be, however sound our psychology, however frank and open our behavior, we cannot penetrate the incognito of the other man, for there are no direct relationships, not even between soul and soul. Christ stands between us, and we can only get into touch with our neighbors through him.

2 Replies to “Christ Our Mediator”